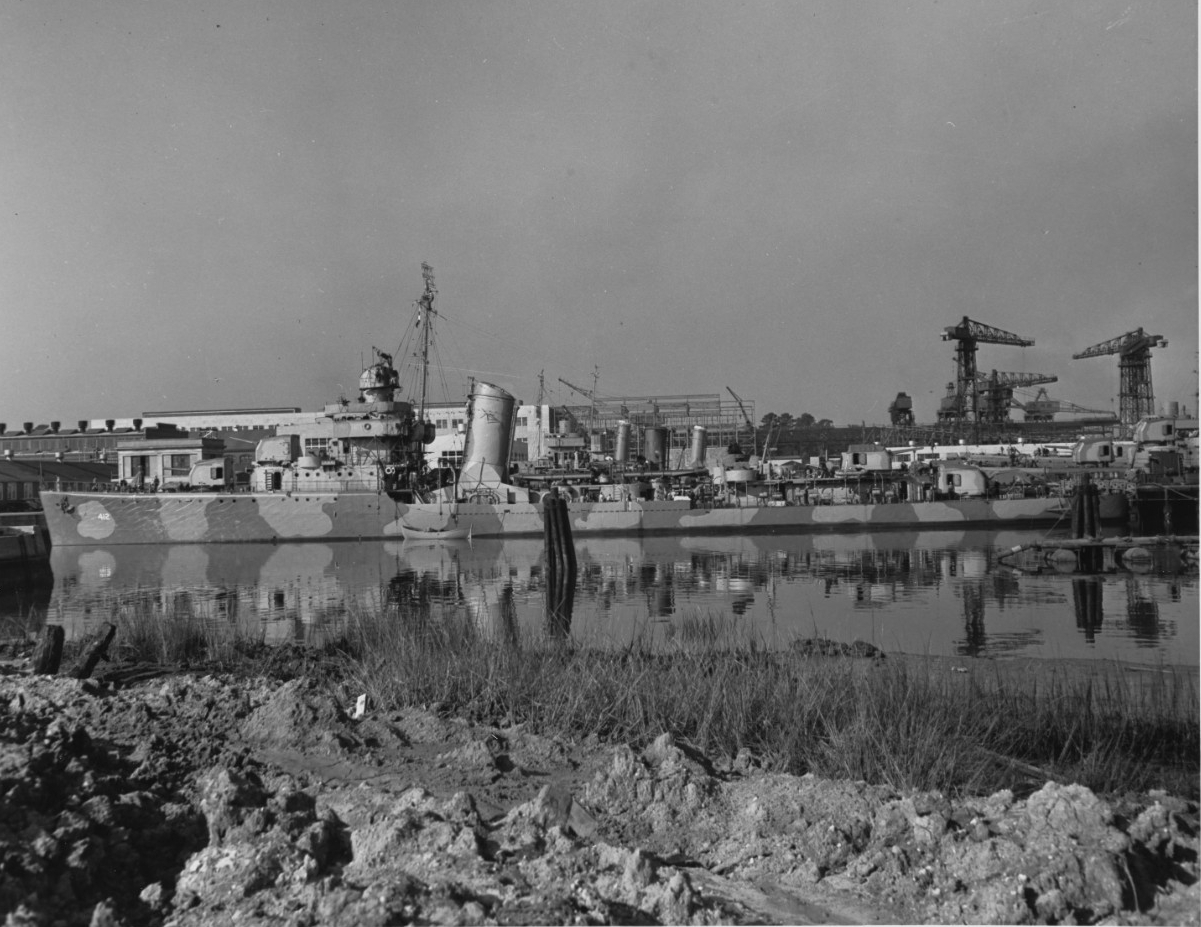 Hammann (DD-412) at the Charleston Navy Yard, South Carolina, in January 1942, just before she transferred to the Pacific. She is painted in Measure 12 (modified) camouflage. U.S. Naval History and Heritage Command photograph. Catalog#: NH 96828

Charles Hazeltine Hammann was born in Baltimore, Md., 16 March 1892, and was appointed to the provisional rank of Ensign, Naval Reserve, Flying Corps, 14 October 1918, while serving overseas. Ens. Hammann was awarded the Medal of Honor, when, as a pilot of a seaplane 21 August 1918, off the coast of Italy, he dived down and landed next to a downed fellowpllot, brought him aboard, and although his plane was not designed for the double load, brought him to safety amid constant danger of attack by Austrian planes. Hazeltine was killed while on active duty at Langley Field, Va., 14 June 1919.

Hammann conducted shakedown off the East Coast and for the next 2 years participated in training and readiness operations off both coasts. At Iceland 7 December 1941 when war began, she quickly returned to Norfolk, Va., for fuel and supplies, and departed 6 January 1942 for the Pacific. She arrived San Francisco 22 January via the Panama Canal and sailed 25 February with Vice Admiral Fletcher's Task Force 17 for action in the South Pacific.

The destroyer took part in training maneuvers in the New Caledonia area during early March, and on the 27th the Task Force departed for the Coral Sea. Hammann acted as screening ship and plane guard for Lexington, Returning to Tongatabu 20 April, the Task Force sortled again into the Coral Sea 27 April for a surprise air raid on Japanese Invasion forces on Tulagi.

While screening the carriers during the air raids of 4 May, Hammann was directed to rescue two fighter pilots downed on Guadalcanal, some 40 miles to the north. Steaming at full speed, the destroyer arrived at dusk and sighted a marker on the beach, which proved to be a parachute. The motor whaleboat was put over the side, but dangerous surf prevented it from landing. Consequently, the pilots were recovered with the use of lines from the boat. This accomplished, an attempt was made to destroy the wreckage of the aircraft, but the rough water made this impossible; Hammann returned to Lexington's screen from this successful operation that night.

Four days later, 8 May, came the main action of the Battle of the Coral Sea, the first naval engagement fought entirely on both sides between aircraft and ships. During the exchange of air attacks, Hammann screened the carriers, firing furously at Japanese torpedo planes as they attacked. Just as the torpedo planes retired, dive bombers appeared, one exploding a bomb a scant 200 yards off Hammann's starboard bow. Lexington, which had taken two devastating torpedo hits to port, was first thought to be under control, tout a large internal explosion shortly before 1300, followed later by others, sealed her fate. As the order was given to abandon ship, Hammann, Morris, and Anderson stood by to receive survivors. The destroyer picked up nearly 500 men from the water before the gallant "Lady Lex" went down the night of 8 May, torpedoed by destroyer Phelps.

The Battle of the Coral Sea, that checked the Japanese advance to the southeast was over, but new demands called far to the north. Under urgent orders from Admiral Nimitz to meet a new threat, Hammann steamed with the Task Force at high speed to Pearl Harbor, arriving 27 May. Working feverishly to repair and replenish the force got underway 30 May to take part in one of the decisive battles of history, Midway. Steaming to meet the overwhelming Japanese fleet, the carriers with their protecting destroyers and cruisers, sped to the northeast just in time. No better example exists in the war of the flexibility and mobility of naval power and the great results that can follow.

During the great air battle of 4 June, Hammann screened Yorktown, helping to shoot down many of the attacking aircraft. But the carrier took two torpedo lilts and, listing heavily, was abandoned that afternoon. Hammann again picked up survivors in the water, including Yorktown's skipper, Captain Buckmaster, and transferred them to the larger ships. Next morning, however, efforts were mounted to save the stricken carrier, a skeleton crew returned on board, and attempts were made to tow her to safety. Hammann came alongside 6 June to transfer a damage control party. The destroyer then lay alongside, providing hoses and water for flrefighting, power, and other services while tied up next to Yorktown.

The salvage party was making excellent progress when the protective screen was penetrated by a Japanese submarine after noon on 6 June. Four torpedoes were loosed; two missed, one passed under Hammann and hit Yorktown, and the fourth hit the destroyer amidships, breaking her back.

As the debris from the explosion rained down and the ships lurched apart, it was apparent that the valiant Hammann was doomed. As she settled with sickening quickness, life rafts were lowered and rescue efforts began by ships in company. The ship sank in just 4 minutes, and following the sinking a violent underwater explosion caused many deaths in the water, bringing the toll in dead to over 80. Survivors were taken on board Benham and Balch.

Hammann thus was lost after taking a distinguished part in two of the most important Pacific battles, turning points in the war and history. The action at Midway was a victory of intelligence bravely applied by Admiral Nimitz and his Fleet, the first really smashing defeat inflicted on the Japanese. 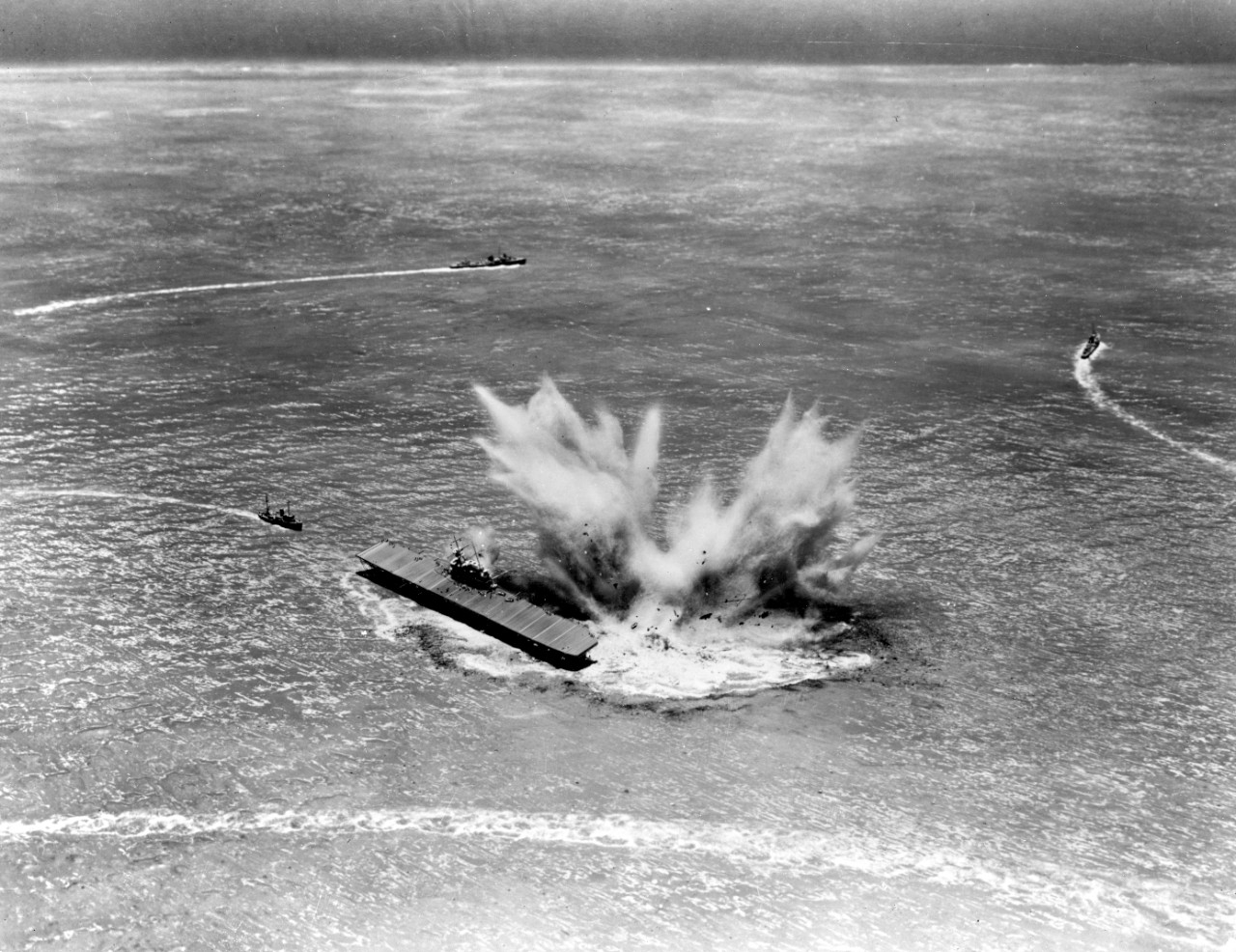 Battle of Midway, June 1942. Diorama by Norman Bel Geddes, depicting the explosion of depth charges from Hammann (DD-412) as she sank alongside Yorktown (CV-5) during the afternoon of 6 June 1942. Both ships were torpedoed by Japanese submarine I-168 while Hammann was assisting with the salvage of Yorktown. Vireo (AT-144) is shown at left, coming back to pick up survivors, as destroyers head off to search for the submarine. Official U.S. Navy photograph, now in the collections of the National Archives. Catalog#: 80-G-701902