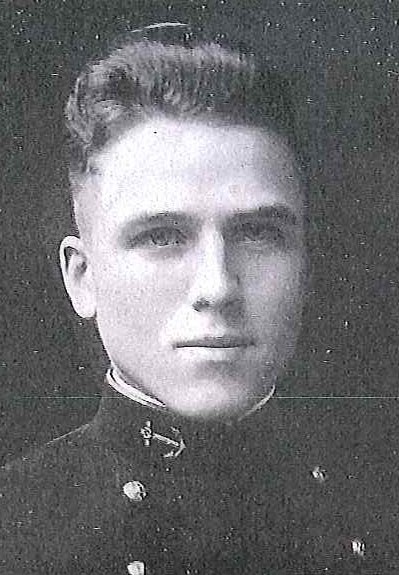 Rear Admiral Bennington was born in Cardiff, Maryland on April 2 1900, the son of Thomas J. and Emma Henry Bennington. He attended Slate Ridge High School in Cardiff prior to entering the US Naval Academy, Annapolis, Maryland, on appointment from his from his native state on June 25, 1918. While a Midshipman he was a member of the baseball squad. Graduated on June 2, 1922, and commissioned Ensign to rank from June 3, 1922, he subsequently progressed through the grades until his promotion in August, 1944, to Captain, to rank from July 10, 1943.

Following graduation in June, 1922, Rear Admiral Bennington had brief temporary duty during July and August in the Bureau of Ordnance, Navy Department, Washington, DC. On August 31, 1922, he reported to USS Delaware, and served aboard that battleship, operating with Division 2, Battleship Divisions, Scouting Fleet, until detached on June 8, 1923, with orders to the Naval Torpedo Station, Newport, Rhode Island, for instruction in torpedoes.

Rear Admiral Bennington had duty at sea for the next five years, serving aboard USS McFarland, a unit of Squadron 14, Scouting Fleet, from January 1924 to May 1925; USS MacLeish, from May 1925 to September 1926, during which time he was a member of the landing force ashore in Shanghai, China, in June and July, 1925; USS Paul Jones, from September 1926 to March 1928, participating in operations in the Yangtze River valley during October 1926 and again, March to June, 1927; and last, USS Nevada, a unit of Battleship Division 2, Scouting Fleet, from July 1928 until May 1929. He had instruction in chemical warfare at Edgewood Arsenal, Edgewood, Maryland, during the latter assignment.

Instruction in general line duties at the Postgraduate School, Annapolis, Maryland, from June 1929 until June 1930 preceded instruction in the Bureau of Navigation, Navy Department, Washington, DC, until June, 1931, when he was ordered to duty in command of the USS Ontario. He served as Commanding Officer of the Ontario, station ship at Tutuila, Samoa, until relieved of command on January 20, 1933. Returning to San Francisco, California, in February, 1933, he proceeded to Washington, DC, where he had duty in the Training Division (Enlisted Personnel) of the Bureau of Navigation from March 3, 1933, until May 10, 1935.

Rear Admiral Bennington again served in the battleship Nevada, then operating with Battleship Division 2, Battle Fleet, from June 1, until June 1937, after which he commanded USS Pinola, until May 31, 1938. He returned to the Naval Academy for duty in connection with the Bureau of Navigation training courses, and detached on June 2, 1941, he reported for duty in connection with fitting out the USS Vulcan, auxiliary repair ship, and for duty as navigator in Iceland prior to and after war was declared by the United States on Japan, Germany, and Italy on December 8, 1941.

Detached from the Vulcan on October 8, 1942, Rear Admiral Bennington reported to the first Naval District for brief duty, after which on January 16, 1943, he went aboard the USS Phoenix to serve in that light cruiser first as navigator and later as executive officer during operations in the Southwest Pacific until June 14, 1944. For meritorious service as Executive Officer and Chief Evaluator for Combat Information Center, attached to the Phoenix, during the period December 26, 1943 to June 6, 1944, he was awarded the Bronze Star Medal with the following citation:

“For meritorious achievement as Executive Officer and Chief Evaluator for Combat Information Center attached to the USS Phoenix during operations against enemy Japanese forces in the Southwest Pacific Area from December 26, 1943 to June 6, 1944. Fearless and skilled in the performance of duty, Captain (then Commander) Bennington initiated and developed the Office of Chief Evaluator for Combat Information Center and from this battle station rendered invaluable assistance to his Commanding Officer during a raid on the Wakde-Samar Area of Dutch New Guinea, April 29-30, in an attack by torpedo planes June 5, and in vigorous pursuit of five enemy destroyers northwest of Biak Island Schouten Group, June 8-9, 1944, all hazardous night operations. As Executive Officer, Captain Bennington was in large measure responsible for welding his crew into a formidable combat unit and for the success of the Phoenix in carrying out numerous effective ship bombardments of hostile positions. His loyal devotion to duty throughout these vital missions was in keeping with the highest traditions of the Untied States Naval Service.”

Detached from the Office of the Chief of Naval Operations on October 10, 1945, Rear Admiral Bennington reported for duty as Commanding Officer of USS Jason (repair ship) at Tsingtao, China, on December 2, 1945. The Jason operated with Commander, Seventh Fleet (Pacific) in Tsangtao, Shanghai, and Guam, during the period of Rear Admiral Bennington’s command.

Relieved of command of USS Jason on January 15, 1947, Rear Admiral Bennington reported to the Office of the Chief of Naval Operations (Fleet Maintenance) on February 10, 1947, and served there until relieved of all active duty, pending retirement. He was transferred to the Retired List of the Navy and promoted to the rank of Rear Admiral on December 1, 1947.