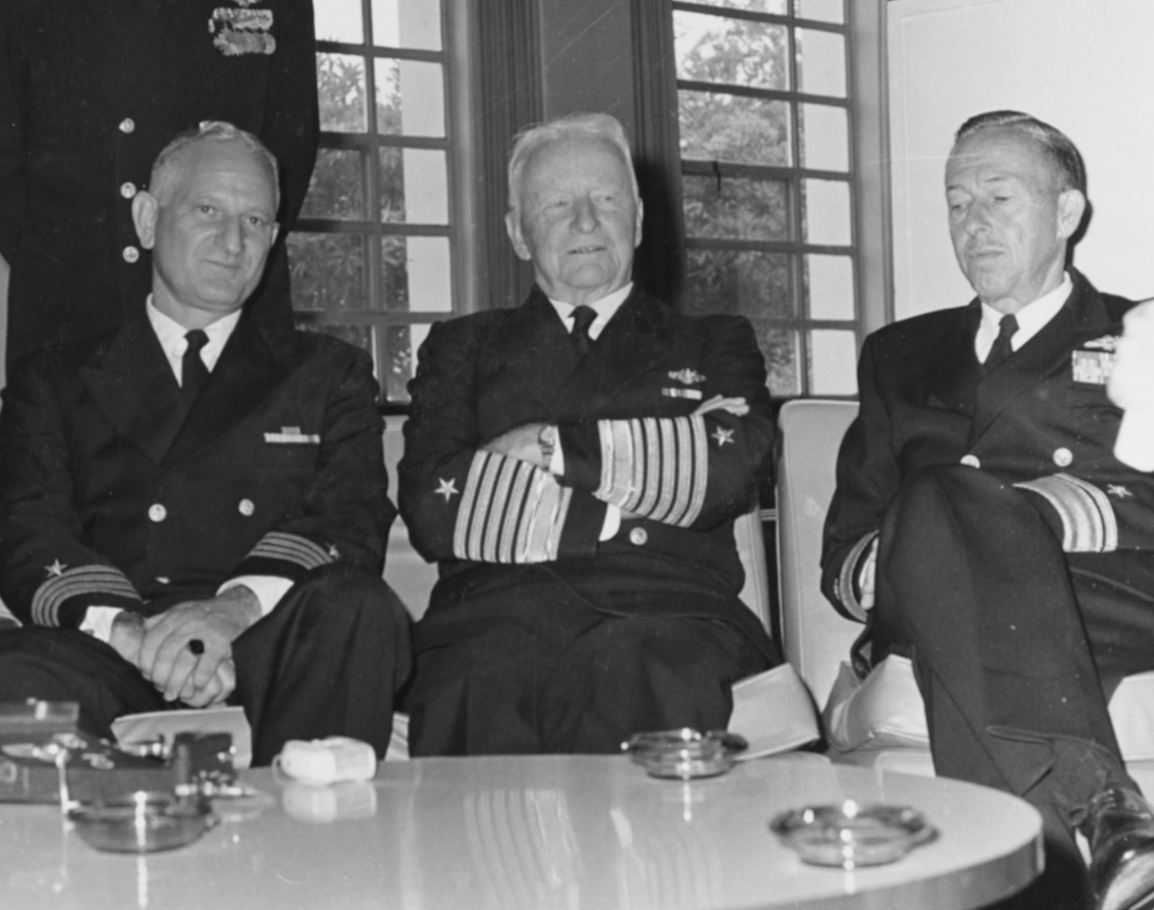 Frank Akers was born in Nashville, Tennessee, on 28 March 1901, son of Mrs. Lillian Crenshaw Akers and the late Mr. Albert Warren Akers, an attorney, and for many years President of the Board of Education of that city. He was attending Wallace University School in Nashville in 1918 when he received appointment to the US Naval Academy, Annapolis, Maryland. Graduated and commissioned Ensign with the Class of 1922, he advanced progressively, attaining the rank of Captain on 1 April 1943. His selection to the rank of Rear Admiral was approved by the President and confirmed by the Senate, to date from 1 March 1950.

After graduation from the Naval Academy in 1922, he was assigned to USS Sumner, attached to Destroyer Squadron Twelve, United States Fleet, operating in the Pacific. While serving as chief engineer of that destroyer in 1924, his ship won the Engineering "E" in Fleet competition. For his part in that achievement he was commended by the Secretary of the Navy.

In February 1925 he was ordered to the Naval Air Station, Pensacola, Florida, for flight training. On 11 September 1925 he was designated Naval Aviator. Ordered to Aircraft Squadrons, Battle Fleet, he was assigned duty with Observation Squadron 2, aviation unit of USS Nevada until January 1927. That was followed by duty with Fighting Plane Squadron 1 based on USS Langley, operating off San Diego, California. Later that year, he assisted in fitting out Fighting Plane Squadron 5 at Norfolk, Virginia, and when that squadron was commissioned he joined it to serve for a year. The following year he returned to Pensacola as an instructor and in command of the Fighter Training Squadron, at the Naval Air Station.

In 1931 he reported as a student of electronics at the Post Graduate School, Annapolis, Maryland, and under its supervision continued study at the Harvard Graduate School, Cambridge, Massachusetts, where he received his Master of Science degree in Electronic Communications in June 1933. For other work completed during the period of the course, he received a Letter of Commendation from the Secretary of the Navy. The following year he served as Radio Flight Test Officer and as Project Officer for Instrument Flying Development, at the Naval Air Station, Anacostia, DC. For this work also, he was commended by the Secretary of the Navy.

In June 1934 he reported aboard USS Langley for duty in charge of Instrument Landing Development, and was the first to make a blind landing in a shore-to-ship flight. He was awarded the Distinguished Flying Cross with citation as follows: "For extraordinary achievement, while participating in an unusually hazardous experimental test flight as pilot on July 30, 1935, in which he took off from the Naval Air Station, San Diego, California, and landed on board the USS LANGLEY."

Detached from USS Langley in July 1936, he was ordered to duty as Communications Officer on the staff of Commander Aircraft, Base Force, in which duty he served for one year. During 1937-39 he was head of the Aircraft Radio Branch, Bureau of Engineering, Navy Department, Washington, DC. After duty in connection with fitting out the converted USS George E. Badger, he assumed command when that vessel was commissioned as a seaplane tender on 8 January 1940. She later was engaged in neutrality patrol of the Caribbean, Bermuda, and North Atlantic waters.

Ordered in April 1941 to fitting out duty in USS Hornet, he served as her Navigator from her commissioning, 20 October 1941 until May 1942, during which period she gained fame from the Doolittle Raid on Tokyo and the Battle of Midway.

In July 1942 he reported as Head of the Aircraft Radio and Electrical Branch, Bureau of Aeronautics. In that capacity he was responsible for the development of Electronic Equipment and Systems for the Navy. He received a Letter of Commendation with Ribbon from the Secretary of the Navy, and was awarded the Legion of Merit with citation in part as follow:

"For exceptionally meritorious conduct...as Head of the Radio and Electrical Branch, Engineering Division, Bureau of Aeronautics, from September 1942 to March 27, 1945. Discharging his duties in connection with aviation radio and related electronic equipment with skill and judgment, Captain Akers initiated methods to simplify operation, maintenance and installation of modern complex electronic systems, involving night fighter radar, blind bombing, airborne fire control radar; planned and directed design and installation of VHF radio equipment in all Fleet aircraft; devised and initiated programs, permitting simple and effective handling of a larger number of communications channels by a single pilot and coordinated and expedited the efforts of his Bureau in administering and directing installation of vital electronic equipment in Fleet aircraft..."

From April 1945 until February 1946, he commanded USS Saratoga. He was awarded a Letter of Commendation by the Commander-in­ Chief, Pacific Fleet, for his services in Carrier Pilot Training. Each landing aboard was a new world record because at the end of the war no carrier could even compare with the Saratoga's number of almost one hundred thousand landings. In August 1945 she claimed another record, 642 landings in a single day. The Saratoga then joined the "Magic Carpet" Fleet, and returned more men to the United States from Pacific areas after V-J Day than any other ship.

In March 1946 he was ordered to duty as Chief of Staff and Aide to the Commander, Carrier Division 5, and Task Force 77. In September of the same year, he returned to the Bureau of Aeronautics, Navy Department, for duty as Director of the Electronics Division, where he remained until May 1948. He then commanded Carrier Division Fifteen, USS Badoeng Strait, flagship, until June 1950, when he joined the staff of Commander Air Force, Atlantic Fleet, as Chief of Staff and Aide. On 8 January 1951 he became Assistant Chief of Naval Operations (Undersea Warfare), Navy Department, where he served for three years. In March 1954 he reported as Commander Carrier Division Two.

On 23 March 1955 he became Senior Navy Member of the Weapons Systems Evaluation Group, Office of the Secretary of Defense, Washington, DC, and in October 1955 reported as Chief of Naval Air Technical Training, Naval Air Station, Memphis, Tennessee. In June 1958 he assumed the duties of Commander Fleet Air, Eastern Atlantic and Mediterranean and Commander Naval Activities, Mediterranean and continued to serve as such until 28 June 1960, when he reported for duty as Commander Fleet Air, Alameda/Commander Naval Air Bases, Twelfth Naval District, with additional duty on the staff of Commander Western Sea Frontier, with headquarters at the Naval Air Station, Alameda, California. "For meritorious service from 1 to 6 March 1960 in connection with the earthquake at Agadir, Morocco..." he was awarded a Gold Star in lieu of a Second Commendation Medal. The citation further states in part:

"Conducting an inspection tour in Morocco at the time of the earthquake, Rear Admiral Akers immediately assumed personal direction of the United States Navy relief operations in the area. Utilizing all transport aircraft under his command, he organized and dispatched rescue parties to the scene of the disaster, evacuated the injured and panic-stricken to the proper medical facilities, and conducted a continuous naval air lift to provide relief and first-aid supplies. He also contacted the United States Ambassador to Morocco and twice accompanied him to Agadir to confer with Crown Prince Moulay Hassan concerning the relief operations. Through his timely and effective leadership during this period, Rear Admiral Akers was instrumental in saving many lives and in relieving human suffering in Agadir..."

On 1 April 1963 he was transferred to the Retired List of the US Navy.