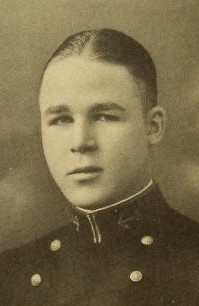 Theodore Charles Aylward was born in Cincinnati, Ohio, on February 14, 1903, son of the late Theodore Edward and Catherine (Burns) Aylward. He attended Highland High School, Fort Thomas, Kentucky, and the University of Cincinnati, prior to his appointment to the U.S. Naval Academy, Annapolis, Maryland, from the State of Kentucky in 1922. As a Midshipman he was a member of the crew and boxing squads. Graduated and commissioned Ensign on June 3, 1926, he subsequently advanced in rank, attaining that of Captain, to date from August 1, 1943.

Following graduation from the Naval Academy in 1926, he remained there for brief instruction before the joining the USS Arkansas in September of that year. Detached from that battleship in December 1927, he reported the next month for instruction in torpedoes at the Naval Torpedo Station, Newport, Rhode Island. Between July and December 1928 he had submarine training at the Submarine Base, New London, Connecticut, after which he served in the USS-S-23, operating with Submarine Division Four.

He was Inspector Officer at the Naval Torpedo Station, Newport, Rhode Island, from June 1933 to April 1935, and following a month’s duty in the USS Narwhal, joined the USS S-28, to serve as Executive Officer, Navigator and First Lieutenant. In May 1936 he assumed command of the USS S-25, and when relieved of command of that submarine in May 1938, was assigned until July 1940 to Submarine Base, Pearl Harbor,Territory of Hawaii. During that period he had duty as Secretary, Torpedo and Mine Officer on the staff of Commander Submarine Squadron Four. He was Damage Control Officer and First Lieutenant aboard the USS Raleigh from July 1940 to July 1941, and in September became Commanding Officer of the USS Searaven. He was commanding that undersea craft when the United States entered World War II, December 8, 1941.

“For extraordinary heroism as Commanding Officer of the USS Searaven in action against enemy Japanese forces in Molucca Strait…” he was awarded the Navy Cross. The citation continues in part: “During Molucca Strait, (he) scored two successful hits on that vessel, the first seen and the second explosion heard as he skillfully maneuvered to avoid counter-attack by another enemy vessel in the vicinity. The enemy destroyer was observed with bows awash and a short time later had disappeared….”

Relieved of command of the Searaven in March 1942, he transferred to the USS Holland, and served as her Torpedo Officer until July 1942. Ordered to the Submarine Base, New London, Connecticut, he was an Instructor in the Submarine School and the Prospective Commanding Officers School until August 1944, when he became Commander LCS(L) Flotilla Three. He was awarded the Legion of Merit with Combat “V,” for “exceptionally meritorious conduct… as a Flotilla and Task Group Commander of Support Landing Craft during the amphibious assaults on Two Jima and Okinawa from February to June 1945…” The citation further states in part: “…. (He) directed his ships in delivering accurate and effective fire on the assault beaches in support of the combat troops and was responsible for maintaining in excellent operating condition a large number of gunboats and mortar support ships carrying out protection patrols and support missions…”

Returning to the United States in April 1946, he joined the staff of Commander Philadelphia Group, Sixteenth Fleet, and in December 1948 transferred to the staff of Commander Amphibious Force, U.S. Pacific Fleet, with headquarters in San Diego, California. From November 1949 to July 1950 he commanded the USS Chilton, after which he had duty as Assistant Director of the Fleet Operations Division, Office of the Chief of Naval Operations, Navy Department, Washington, D.C.

In September 1951 he became Commander Destroyer Squadron Thirty-Four, and in December pf the next year reported as Director of the Tanker Operations Division, Military Sea Transportation Service, with headquarters in Washington, D.C. In April 1955 he was ordered to duty as Chief of Staff and Aide to the Commandant of the Fourth Naval District, with headquarters in Philadelphia, Pennsylvania.