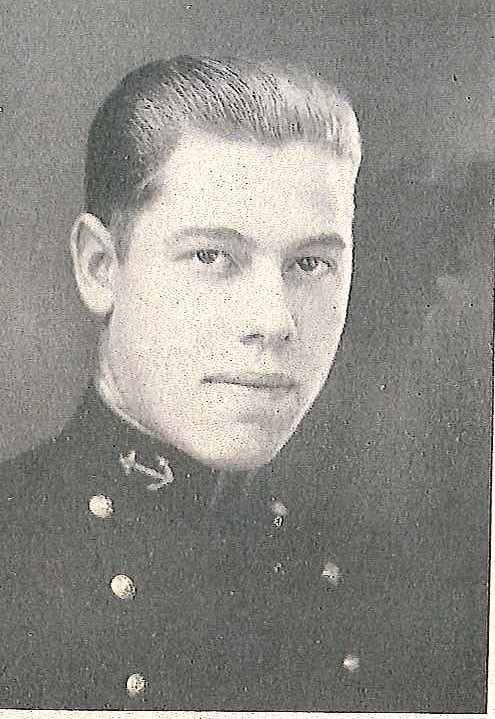 Hilan Ebert was born in Alliance, Ohio, on March 21, 1903. He attended Alliance High School and Marion Institute, Marion, Alabama, before entering the Naval Academy from the Sixteenth Ohio District in 1922. He was graduated and commissioned Ensign on June 3, 1926, and was subsequently promoted to Lieutenant (jg), June 3, 1929; Lieutenant, June 30, 1936; Lieutenant Commander, September 1, 1940.

After graduation in 1926, he served consecutively in USS Chaumont, USS Sands, USS Colorado, and USS Kane, until June 5,1928, when he was ordered to the Naval Torpedo Station, Newport, Rhode Island, for instruction, and had further instruction at the Submarine Base, New London, Connecticut, following a tour of duty aboard USS Lexington. From January 23, 1932 to March 15, 1933, he had consecutive service in USS S-42, USS S-28, and USS S-46, after which he was transferred to the Eleventh Naval District, San Diego, California, and thence to the Naval Academy for Postgraduate Instruction in School of Line.

Service in USS Altair and as Engineer Officer of the USS Mahan preceded that of instructor in the Department of Marine Engineering at the Naval Academy from July 1938 to May 1940, after while he joined USS Simpson for the Midshipman’s First Destroyer Cruise. On June 14, 1940 he reported the Destroyer Squadron Three, as Squadron Engineer Officer of Staff of commander, and on September 18, 1941, to Staff, Commander, Train Squadron Six, Pacific Fleet (later designated Service Force, Pacific Fleet). In May 1942, he joined USS Northampton as Engineer Officer, and while serving in that capacity was killed in enemy action when the ship was torpedoed, and later sunk, in the Solomon Islands area on the night of November 30, 1942.

Lieutenant Commander Ebert was posthumously awarded the Navy Cross and the Purple Heart Medal and cited as follows:

“For extraordinary heroism as Engineering Officer aboard USS Northampton during action against enemy Japanese forces attempting to effect groop landings on Guadalcanal on the night of November 30, 1942. Stationed in the after engine room at the time the Northampton was torpedoed and set afire, Lieutenant Commander Ebert, with cool courage and utter disregard for his won personal safety, persistently carried out his duties despite the fact that his station, immediately after the explosion, became flooded with oil and water. He gallantly gave up his life in the service of his country.”

In addition to the Navy Cross and the Purple Heart Medal, he had the American Defense Service Medal, Fleet Clasp; the Asiatic Pacific Campaign Medal, and is entitled to the World War II Victory Medal.

A Destroyer Escort vessel, USS Ebert, DE 768, has been named to honor him. The ship was launched on May 11, 1944, at the Tamp Shipbuilding Company, Tampa, Florida, when Mrs. Alda War Ebert, Lieutenant Commander Ebert’s widow, served as sponsor. The Ebert was commissioned on July 12, 1944.