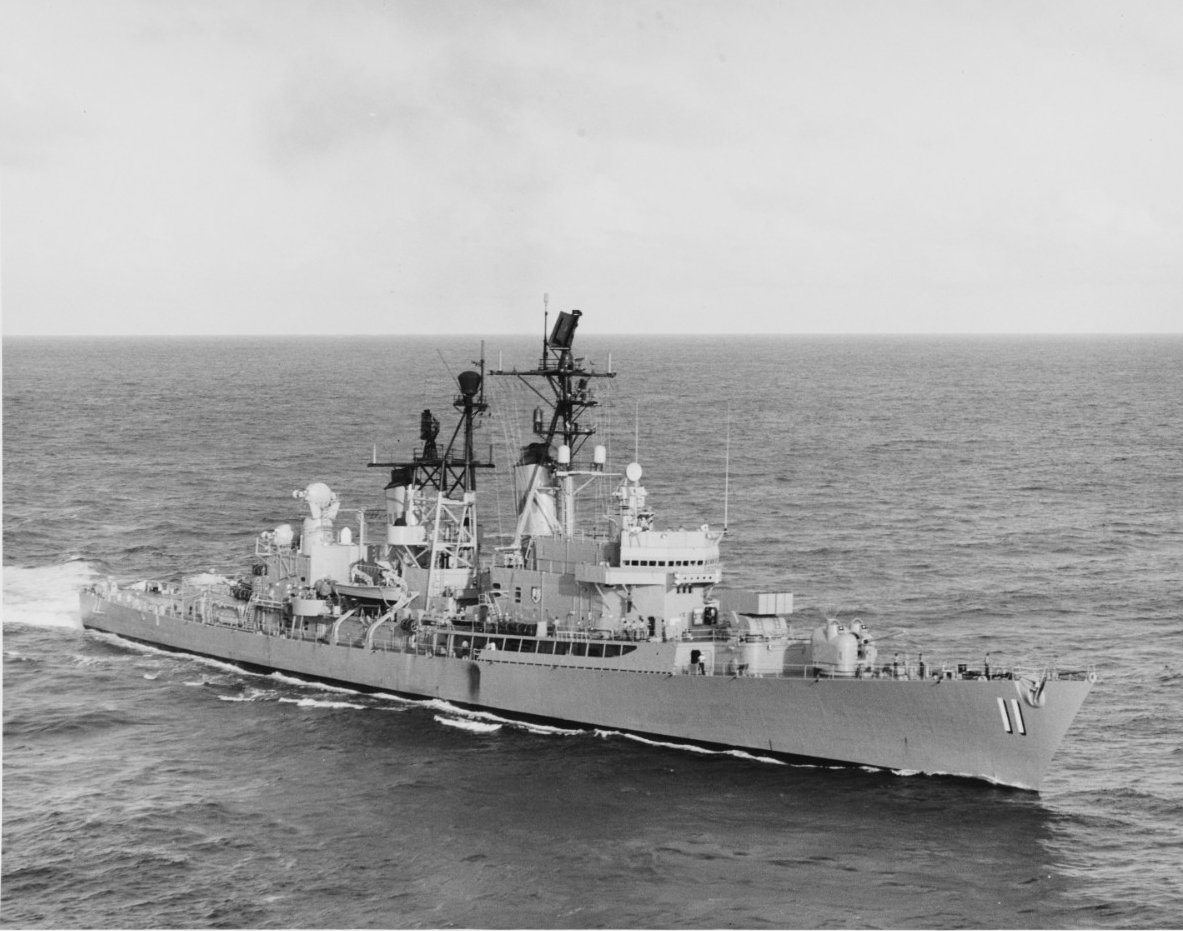 Mahan (DLG-11) underway, circa 1963. Taken by a Oriskany (CVA-34) photographer. Official U.S. Navy photograph from the collections of the Naval History and Heritage Command, NH 106810.

Rear Adm. Alfred Thayer Mahan, born 27 September 1840 at West Point, N.Y., graduated from the Naval Academy in 1859 and served with the South Atlantic and western Gulf Blockading Squadrons during the Civil War. Later appointed President of the Naval War College, he served two tours, 1886‑89 and 1892‑93.

His widely admired study, "The Influence of Sea Power Upon History," and his many other well reasoned and scholarly books and articles have made a major impact upon geopolitical thought and modern theories of world strategy and have established Mahan's place among history's great thinkers.

Having retired in 1896, he was recalled during the Spanish‑American War to serve on the Naval Strategy Board. Among his many activities during the years which followed were service as a delegate to the First Peace Conference at The Hague; as a member of the Board of Visitors, Naval Academy, 1903; with the Senate Commission on Merchant Marine, 1904; as a member of the Commission to Report on the Reorganization of the Navy Department; and as a lecturer at the Naval War College. He died at Washington, D.C. 1 December 1914. 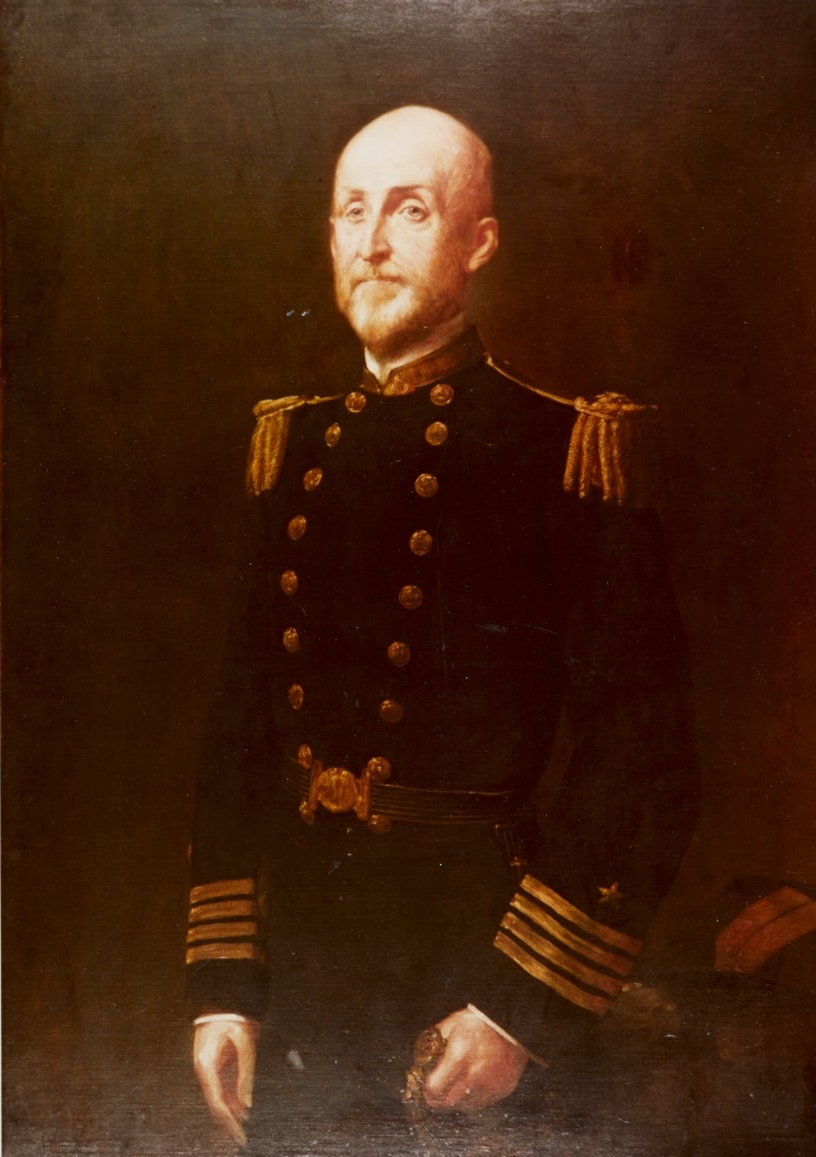 During the first year and a half of her commissioned service, Mahan's primary assignment was the testing and evaluation of her weapons systems, ASROC and Terrier missiles. A unit of the Pacific Fleet's Cruiser Destroyer Force, she operated out of San Diego, participating in local and fleet exercises off the west coast and in Hawaiian waters. Leaving San Diego 6 June 1962, she commenced her first western Pacific deployment. For the next 6 months she cruised with other units of the 7th Fleet, taking part in antisubmarine, antiaircraft, and amphibious exercises as well as making good will calls on ports in the Far East. Included in these latter visits was a stop at Saigon 24 to 28 October for the Republic of Vietnam's Independence anniversary celebrations.

1963 brought Mahan's entrance into the standard schedule of the Pacific Fleet, beginning with a shipyard overhaul at Long Beach Naval Shipyard. Following her yard period, she conducted training exercises off the west coast. She then departed San Diego 6 August for deployment in the western Pacific. In addition to assignments in Japanese and Philippine waters, she spent, on this tour, a total of 4 weeks cruising off South Vietnam before returning to California 10 March 1964.

Remaining on the west coast until late 1965, the guidedmissile frigate underwent a 512‑month overhaul, 1 May to 20 October, followed by test and training exercises and a demonstration of her antisubmarine warfare capabilities before members of the United States‑Canadian Military Cooperation Committee 9 December. During the summer of 1965, she embarked midshipmen from the Naval Academy and various NROTC units for summer training. Departing San Diego 19 October, she sailed to Pearl Harbor for antisubmarine training operations and then continued on to the western Pacific, arriving at Subic Bay 22 November. Mahan operated with the 7th Fleet, spending alternate monthly periods on patrol off Vietnam, until returning to California in April 1966.

Upon arrival at San Diego 28 April, Mahan continued her previous west coast activities, local and fleet training operations, missile firing exercises at the Pacific Missile Range, and, as during the summer of 1965, the training of midshipmen during June and July. August brought the installation of a helicopter flight deck.

The period 1 December 1966 through 4 June 1967 again saw Mahan in the western Pacific where, as before, she operated off Vietnam, patrolling and providing gunfire support in the fight to prevent the aggressive spread of communism. Arriving back at San Diego 17 June, Mahan sailed on 31 July to represent the Navy at Seattle's annual Sea Fair. Following further coastal operations, she entered Long Beach Naval Shipyard 1 November for overhaul. This was completed late in April 1968 and Mahan remained off the west coast until departing for the western Pacific in August. She remained as a part of the 7th Fleet into 1969.