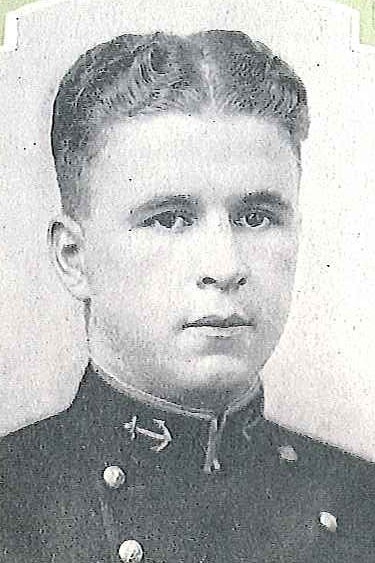 Myron Thomas Evans was born in Coalton, Ohio on April 19, 1903, son of Mrs. Elizabeth S. (Lloyd Evans and the late Edgar T. Evans. He attended Jackson (Ohio) High School and Culver (Indiana) Military Academy, prior to his appointment to the US Navy Academy, Annapolis, Maryland, form his native state in 1923. As a Midshipman he won Class numeral in Varsity boxing, was a member of the Glee Club and played Company football and baseball. Graduated and commissioned Ensign on June 2, 1927, he subsequently advanced in rank, attaining that of Captain, to date from March 20, 1945.

Following graduation from the Naval Academy in 1927, he joined USS Tennessee, and in June 1929 transferred to USS William Jones. Detached from that destroyer in September 1929, he was ordered to the Naval Air Station, Pensacola, Florida, for flight training. Designated Naval Aviator on August 22, 1930, he next had duty with the aviation units aboard the battleships Idaho and New York successively.

From the beginning of World War II, December 8, 1941 until October 1942, he commanded Cruiser Aircraft Squadrons FOUR and SIX. In that command he participated in various operations including the battles of Coral Sea, Midway, Guadalcanal, and Eastern Solomons. Following duty as Air Officer in the Staff of the Commander Hawaiian Sea Frontier, he reported in July 1943 as Gunnery Officer at the Naval Air Station, Corpus Christi, Texas. Returning to the combat area in February 1944, he joined USS Yorktown as Officer, and later become Executive Officer of that aircraft carrier. For outstanding service while attached to the Yorktown, he was awarded the Bronze Star Medal with Combat “V,” and is entitled to the Ribbon for, and a facsimile of the Presidential Unit Citation awarded the Yorktown. The citations follow in part:

Bronze Star Medal:  “For meritorious service as Air Officer of the USS Yorktown in action against enemy Japanese forces in the Pacific War Area, from June 30, 1944 to April 10, 1945. Serving with distinction during this period, Captain Evans constantly improved flight deck procedures, maintenance methods and air operations to maintain high aircraft availability and to inflict maximum damage on the enemy… (He) contributed materially to the success of the air department in the attack on the Marianas Islands. July 1944; on the Western Caroline Islands, July 1944; on Philippine shipping and central Philippine airfields, November 1944; on Luzon airfields in support of the occupation of Mindoro, December 1944; on Luzon and Formosa airfields, shipping in South China Sea and airfields along the French Indo-China Coast, Canton- Hong Kong area and Formosa, January 1945; on shipping and airfields at Formosa and Nansel Shoto, January 1945; attack on Tokyo Bay area airfields and aircraft factories; on Chichi Jima, Volcano Islands. February 1945; and in support of invasion of Okinawa, March and April 1945…”

Presidential Unit Citation:  “For extraordinary heroism in action against enemy Japanese forces in the air, at sea, and on shore in the Pacific War Area… Daring and dependable in combat, the Yorktown with her gallant officers and men rendered loyal service in achieving the ultimate defect of the Japanese Empire.”

Detached from the Yorktown in August 1945. He had a period of hospitalization before reporting in January 1946 as Commanding Officer of the Naval Auxiliary Air Station, Crows Landing, Virginia. He continued to command that Air Station until June 1946, when he became Bureau of Aeronautics Representative, New York, New York. Two years later, June 1948, he assumed command of USS Albemarle, and in July 1949 was relieved for duty as Deputy Director of the Guided Missile Division, Bureau of Aeronautics, Navy department, Washington, DC. He remained there until October 1950, and following an assignment which extended to January 1953, as Commanding Officer of the Naval Air Station, Point Mugu, California, he reported as U.S. Naval Attaché for Air, Caracas, Venezuela.

In March 1956 he was ordered to duty as senior member of the Physical Evaluation Board, Fourth District, with headquarters in Philadelphia, Pennsylvania.