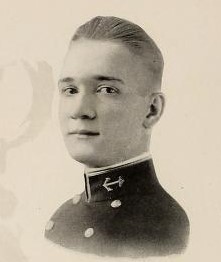 John Howard Cassady, born in Spencer, Indiana, April 3, 1896, attended Spencer High School and before his appointment to the US Naval Academy, Annapolis, Maryland, from the Second District of Indiana in 1915, prepared at the Army Navy Preparatory School, also located in Annapolis. As a Midshipman he participated in baseball and basketball. Graduated and commissioned Ensign on June 7, 1918, with the Class if 1919, he received temporary promotion to Lieutenant (jg), during World War I, was commissioned in that rank July 1, 1920 and subsequently progressed in rank, attaining that of Vice Admiral to date from January 15, 1950. He served in the rank of Admiral as Commander Naval Forces, Eastern Atlantic and Mediterranean, with date of rank, April 7, 1954, and was retired in that rank on May 1, 1956.

Following graduation in 1918, he was aboard the USS Virginia for a month prior to reporting in August to the USS Cassin, operating with the destroyer forces based on Queenstown, Ireland. After the Armistice, he joined the USS Olympia, flagship of Commander, US Naval Forces, Eastern Mediterranean, and remained in that cruiser between December 1918 and March 1920. He next had consecutive duty until June 1922 in the USS Wilkes, USS Dixie, and USS Truxtun. Transferred to the USS McCormick, flagship of Commander Destroyer Detachment Naval Forces, Europe, he served later as Executive Officer before he was detached in February 1924.

Returning to the United States, he was assigned to the Office of Naval Communications, Navy Department, Washington, DC, from March 1924 until February of the following year, when he reported as District Communication Superintendent with additional duty as Radio Material Officer of the San Juan Communication District, San Juan, Puerto Rico. In September 1926 he joined the USS Aroostook, and in March 1928 was detached for flight training at the Naval Air Station, Pensacola, Florida. Designated Naval Aviator on December 8, 1928, he served with Scouting Squadron 2 based on the USS Saratoga until May 1930, and the following three years had duty at the Naval Air Station, Pensacola, Florida.

He reported in October 1933 for duty in connection with the fitting out of the USS Ranger, and reported aboard that aircraft carrier upon her commissioning, June 4, 1934. In June 1935 he assumed command of Scouting Squadron 4, based on the aircraft carrier Langley operating with Aircraft, Battle Force, and from June 1936 to May 1937 was attached to the Naval Air Station, Naval Operating Base, Norfolk, Virginia. He then became Assistant Naval Attaché and Assistant Naval Attaché for Air at the American Embassy, Rome, Italy.

Returning to the United States in July 1939, he assisted in the fitting out the USS Wasp (CV-7), at the Bethlehem Shipbuilding Corporation, Quincy, Massachusetts and served as Air Officer of that aircraft carrier from her commissioning April 25, 1940, until April 1941. He joined the staff of Commander, Aircraft (later designed commander Carriers), Atlantic Fleet, as Operations Officer and was in that capacity when the United States entered World War II, December 8, 1941. From May 1942 until March 1943 he had duty as Chief of Staff and Aide to the Chief, Air Operational Training, Naval Air Station, Jacksonville, Florida, after which he was assigned to the Training Division, Bureau of Aeronautics, Navy Department, Washington, DC. In that latter assignment he also served as the Navy’s Representative on the Joint Committee of Air Training in North America.

On August 22, 943 he assumed command of the USS Saratoga. Under his command that carrier operated with a Task Force in a series of successful raids on enemy bases throughout the South and Central Pacific, taking part in the Treasury-Bougainville Operation, October 28- December 15, 1943; the Gilbert Islands Operation, November 20, 1943; Occupation of Eniwetok Atool, February 17-March 2, 1944; the Sabang Raid, April 19, 1944; and the Soerabaja Raid, May 17, 1944.

He awarded the Legion of Merit for “exceptionally meritorious conduct in the performance of outstanding services to the Government of the United States as Commanding Officer of the USS Saratoga during action against enemy Japanese forces in the Buka Bonis Area, Bougainville, British Solomon Islands, on November 1-2 and against Rabaul, New Britain, on November 5 and 11, 1943…”

He was also awarded a Gold Star in Lieu of a third Legion of Merit, with Combat “V,” for outstanding service as “… Commander Task Force Fifty Eight Point Five with the British Eastern Fleet and as Commanding Officer of the USS Saratoga in action against enemy Japanese forces in the vicinity of Sabang, Sumatra, and Soerabaja, Java, from March 9 to May 20, 1944… (enabling) air groups of the USS Saratoga and the HMS ILLUSTRIOUS in inflict extensive damage on enemy military and naval installation in this area with a minimum of losses of our personnel and equipment…”

In October 1945 he became Commander Carrier Division Four, Atlantic Fleet, and continued to serve in that command until January 1946, when he was transferred to duty as Commander Carrier Division One. From April 1947 to June 1948 he served as Commander Fleet Air, Quonset Point, Rhode Island. He then returned to the Navy Department to serve as Assistant Chief of Naval Operations (Air), remaining there until July 1949, when he reported as Commander Fleet Air, Jacksonville, Florida.

With the accompanying rank of Vice Admiral, he assumed the duties of Deputy Chief of Naval Operations (Air) on January 25, 1950. When detached from that assignment in May 1952, he reported for duty as Commander sixth Fleet, and on March 19, 1954, he became Commander in Chief, Naval Forces, Eastern Atlantic and Mediterranean with the rank of Admiral. He was transferred to the Retired List of the US Navy on May 1, 1956.

In addition to the Legion of Merit with two Gold Stars and Combat “V,” Admiral Cassady has the World War I Victory Medal; Destroyer Clasp; American Defense Service American, Fleet Clasp; American Campaign Medal; Asiatic-Pacific Campaign Medal with four stars; World War II Victory Medal; National Defense Service Medal. He also holds the degree of Honorary Commander of the Military Division of the Most Excellent Order of the British Empire, Companion of the Order of the Bath, awarded him by the Government of Great Britain, and the Order of Phoenix (Grand Officer), awarded by the Government of Greece.

One of the Navy’s most experienced carrier aviators, Admiral Cassady has made numerous speeches on Naval Air Operations, and has participated in Naval-Civilian Orientation Course.