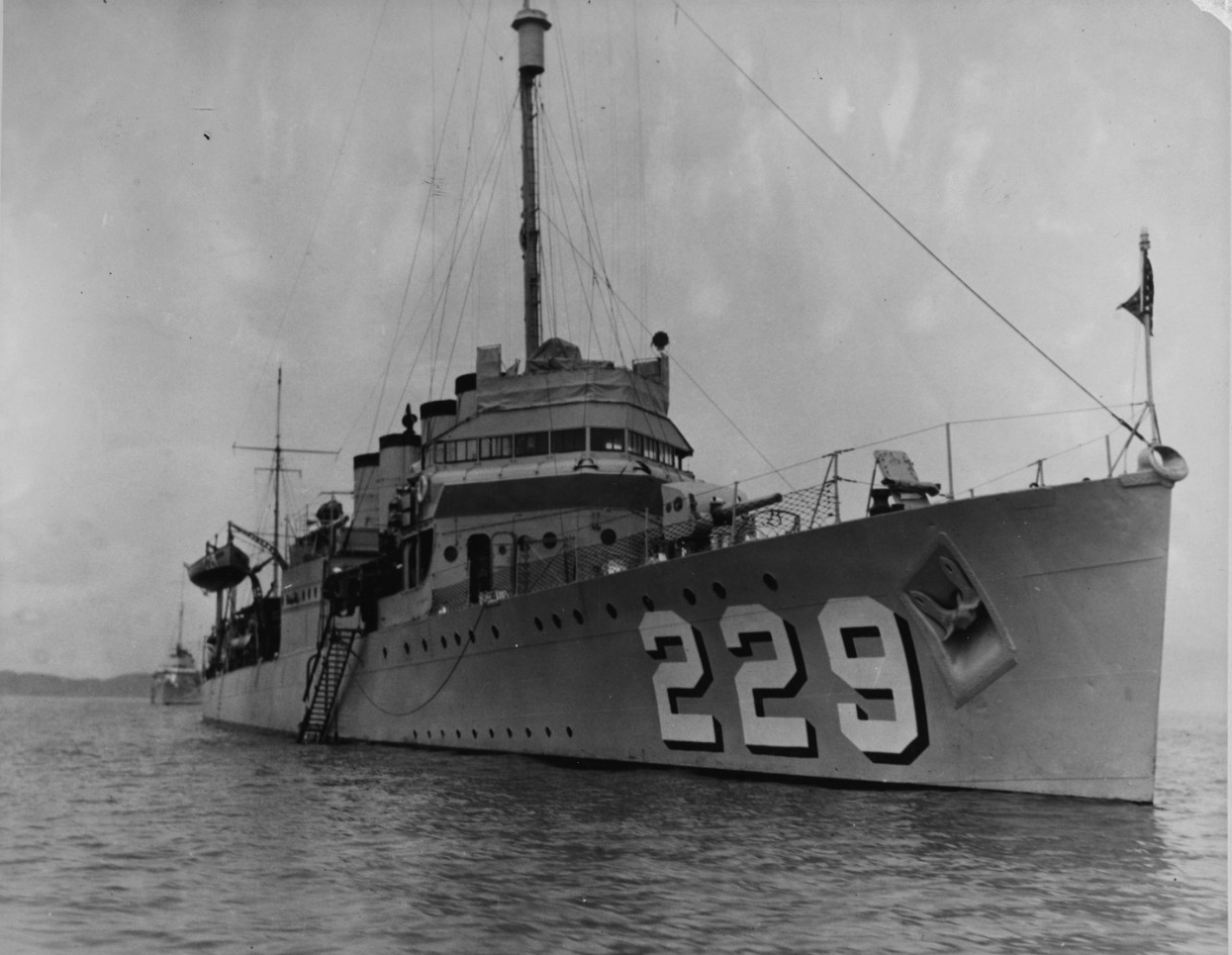 Truxtun (DD-229) at anchor during the later 1920s. Note her stockless anchor and its associated hull fitting. Truxtun was the only flush-decker destroyer to have this arrangement. U.S. Naval History and Heritage Command photograph, NH 45232. 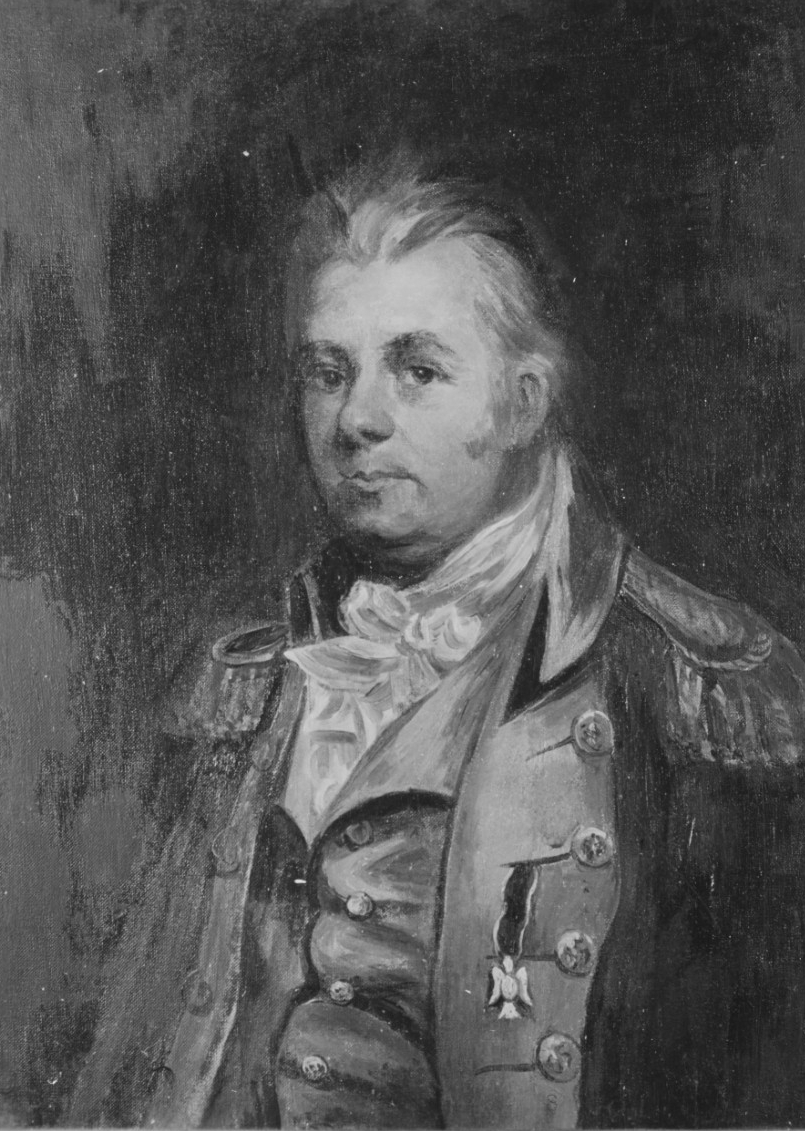 The third Truxtun (DD-229) was laid down on 3 December 1919 at Philadelphia, Pa., by William Cramp & Sons; launched on 28 September 1920; sponsored by Miss Isabelle Truxtun Brumby; and commissioned at the Philadelphia Navy Yard on 16 February 1921, Lt. Comdr. Melville S. Brown in command.

Upon commissioning, Truxtun completed shakedown and began duty along the east coast with the Atlantic Fleet as a unit of Division 39, Destroyer Squadron 3. She operated with that unit along the Atlantic seaboard until the fall when she was reassigned to Division 43, Squadron 15. During the winter of 1921 and 1922, the destroyer joined the fleet in maneuvers and exercises near Guantanamo Bay, Cuba.

In March 1922, Division 43 returned north to Newport, R.I., to prepare for service in the Asiatic Fleet. On 22 June 1922, Truxtun departed Newport and proceeded, via the Mediterranean, the Suez Canal, and the Indian Ocean, to the Far East which she reached in mid-August. By early September, she and several sister destroyers of Division 43 joined the main elements of the Asiatic Fleet off Chefoo on the northern coast of China. Late in October, the fleet headed south to its winter base at Manila in the Philippines, from whence it conducted exercises until the following spring.

Truxtun served with the Asiatic Fleet for the next 10 years. During that decade, she alternated summer cruises in Chinese waters with winter maneuvers in the Philippines. This routine was punctuated by special unusual assignments. For instance, in June 1924, she and the other five destroyers of Division 43 helped to form a chain of picket ships across the Yellow Sea for the Army Air Corps's global flight mission. More often, however, internecine warfare in China brought Truxtun to the coast of that troubled nation to protect American lives and property. She spent a total of eight out of the 13 months between September 1926 and October 1927 patrolling the Yangtze River while a myriad of factions in China clawed at one anotherand anyone else who happened to cross their paths. The destroyer returned to the Yangtze Patrol twice more, from 1 March to 14 April 1930 and from January through March 1932 when internal political convulsions in China threatened foreign lives and property.

On 18 April 1932, Truxtun departed Manila and the Asiatic Fleet to join the destroyers attached to the Battle Force. After stops at Guam, Midway, and Hawaii, she reached Mare Island Navy Yard on 13 May. For the next seven years, she cruised the Pacific, as far north as Alaska and as far south as the Panama Canal, participating in maneuvers with her big sisters of the Battle Force. Only once, in 1934, did she leave the Pacific. On 9 April, she cleared San Diego and transited the Panama Canal. After calling at Port-au-Prince, Haiti, Truxtun steamed north to New York City, arriving on 31 May. Following that visit, she cruised the eastern seaboard. On 15 September, the destroyer stood out of Hampton Roads, retransited the canal, and returned to San Diego on 9 November to resume operations with the Battle Force.

On 27 April 1939, Truxtun steamed out of San Diego and headed for the canal once more. She reached Norfolk on 15 May and joined Destroyer Division 27, Atlantic Squadron. The destroyer cruised the east coast of the United States while war clouds gathered in Europe. Soon after the outbreak of war in September, Truxtun began enforcing the provisions of President Franklin Roosevelt's proclamation of American neutrality by patrols and escort duty off the Atlantic coast, in the Gulf of Mexico, and in the Caribbean. In late May and early June 1940, the warship made a voyage to Casablanca in French North Africa and then resumed neutrality patrols off Florida and in the Caribbean. 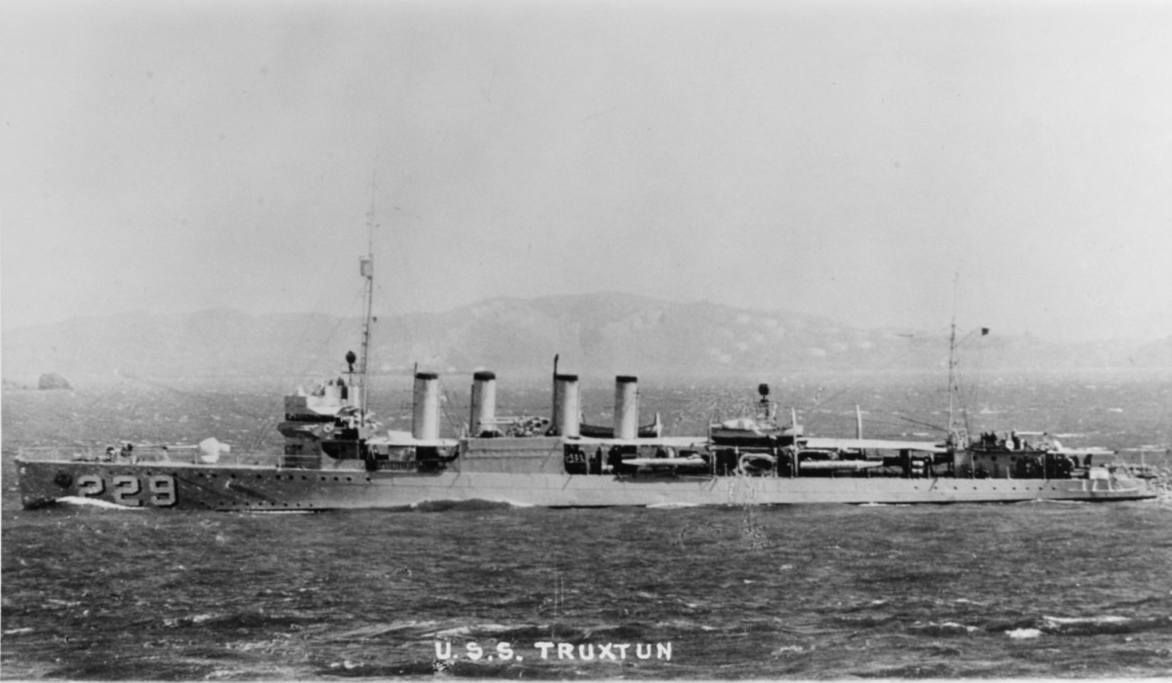 Following repairs at Norfolk in December 1940 and January 1941, Truxtun cleared Hampton Roads on 6 February. The next day, she reached Newport, R.I., where she joined Destroyer Division 63, Squadron 31. Between late February and mid-March, she made two voyages to Halifax, Nova Scotia, returning to the United States at the Washington Navy Yard on both occasions. On 15 March, the destroyer returned to Newport and resumed patrols and exercises. For the remainder of her career, Truxtun patrolled the North Atlantic sea lanes and escorted convoys from New England and Canadian ports, via Argentia, Newfoundland, to Reykjavik, Iceland.

On Christmas Day 1941, Truxtun departed Boston in the screen of Convoy HX-168. She arrived at Reykjavik on 13 January 1942 and, six days later, headed back to Argentia with Convoy ON-57. At 0415 on 18 February while acting as escort to Pollux (AKS-2) in Placentia Bay, Newfoundland, Truxtun ran aground on Ferryland Point. She broke up almost immediately after grounding and, in spite of the heroic efforts of the local populace, lost 110 members of her crew to the elements. Her name was struck from the Navy list on 25 March 1942.