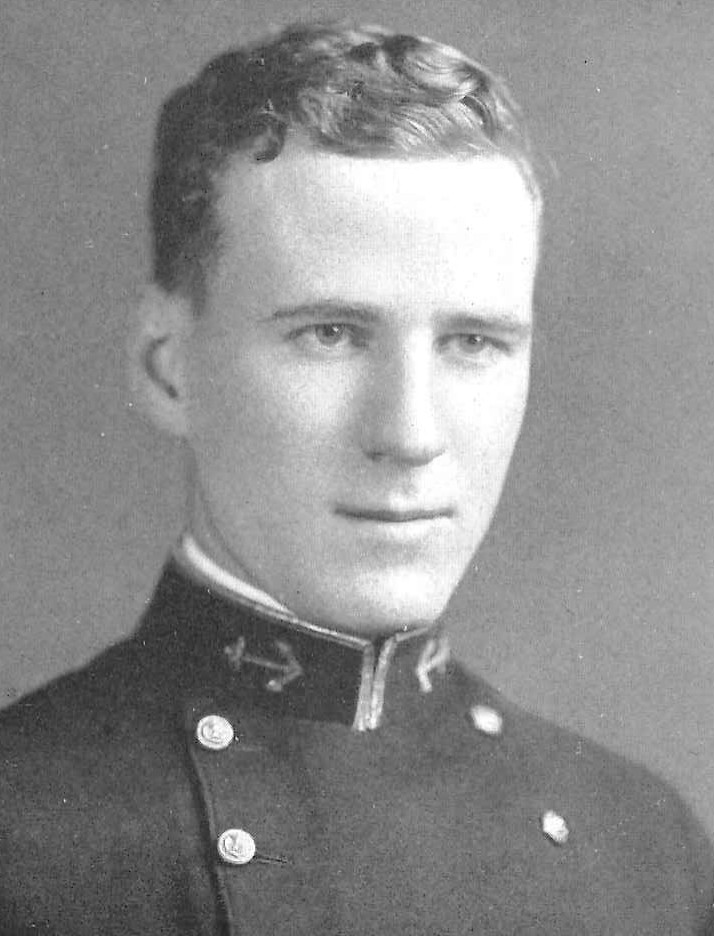 Edgar Hadley Batcheller was born in Mattapoisett, Massachusetts, on May 2, 1910, son of James Hervey and Elizabeth Towne (Field) Batcheller.  He attended Oregon State College for a year before his appointment to the US Naval Academy, Annapolis, Maryland, in 1930.  He was graduated and commissioned Ensign in the US Navy on May 31, 1934, and by subsequent advancement attained the rank of Rear Admiral, to date from July 1, 1961.

After graduation from the Naval Academy in June 1934, he reported to the USS New Mexico, and served for two years as Junior Watch and Division Officer on board that battleship.  He attended Massachusetts Institute of Technology, at Cambridge, under cognizance of the Naval Postgraduate School, during the next three years, graduating with the degree of Master of Science in Naval Construction in June 1939.  This was followed by brief instruction at the Chemical Warfare School, Edgewood, Maryland, and his assignment to the Boston Navy Yard, as Ship Superintendent and Docking Officer.  He remained there from September 1941 until July 1944 as Hull Planning and Estimating Officer.

“During the climactic phase of the war, he contributed immeasurably to the maintenance and material readiness of all naval vessels operating or staging through the Marianas Islands.  He was charged with the responsibility of procuring and distributing spare parts and electronic equipment to the naval forces operating out of the Marianas…(and) overcame the increasingly difficult problems of unsettled personnel and inadequate facilities which were incident to the repair and maintenance function in a forward area…”

Reporting to the Navy Department, Washington, DC, in December 1946, he served briefly in the Preliminary Design Division of the Bureau of Ships, then from February to November 1947 was Secretary to the President’s Advisory Committee on the Merchant Marine.  He again had duty in the Preliminary Design Division (Underwater Explosion Branch) of the Bureau of Ships from November 1947 to July 1949, and again from September of that year until July 1950, with a few months’ time out for service as Technical Adviser to the State Department for the Tri-Partite Conference on German Shipping.

He had three years’ duty as Fleet Maintenance Officer and Officer in Charge of Service Force Ship Maintenance on the Staff of Commander Service Force, Pacific, and in July 1953 reported to the Naval War College, Newport, Rhode Island, for instruction.  After graduating in June of the next year, he served for two years at the Portsmouth (New Hampshire) Naval Shipyard as Shipbuilding Superintendent, and later as Production Officer.  Under orders of July 5, 1956, he again served in the Bureau of Ships, Navy Department, this time as Comptroller.  On April 24, 1959, he was ordered detached for duty as Supervisor of Shipbuilding, USN, with collateral duty as Naval Inspector of Ordnance, Quincy, Massachusetts, and continued to serve in the former duty until August 1961.

From September 27, 1961 to April 1968 he was Assistant Chief of the Bureau of Ships for Plans and Administration and Inspector General of the Bureau of Ships, Navy Department, after which he served as Commander Charleston (South Carolina) Naval Shipyard, with additional duty as Industrial Manager of the Sixth Naval District.  In  July 1968 he became Inspector General, Navy Ship Systems Command, Washington, DC, and served as such until relieved of active duty pending his retirement, effective July 1, 1969.

“For exceptionally meritorious service from April 1963 through June 1969 as Commander Charleston Naval Shipyard, and subsequently as Inspector General, Navy Ship Systems Command…” he was awarded the Legion of Merit.  The citation further states in part: “…Rear Admiral Batcheller, as Commander Charleston Naval Shipyard, significantly improved the capability of the shipyard to repair, overhaul, and refuel nuclear submarines, and to support POLARIS submarines and missile surface ships.  In his position as Inspector General…(he) revitalized the functions of the Inspector General’s office by providing dynamic leadership, through inspections, and comprehensive findings and recommendations leading to substantial improvements in the performance of the Naval Ship Systems Command’s field activities…Additionally, he has developed and guided an inspection and consultant function which will have profound impact on the Navy of the future…”