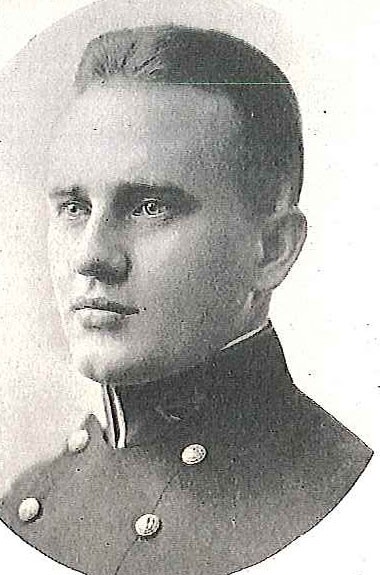 After graduation in 1921, Captain Carlisle had duty in connection with fitting out USS California, and was assigned duty in that battleship on her commissioning, August 10, 1921.

In 1926 he was selected for a postgraduate course in Mechanical Engineering which he completed in 1928 and for which he was awarded the Master of Science degree from Columbia University.

After a three year cruise on the battleship Wyoming he was assigned shore duty at the Naval Boiler Testing Laboratory as Refractories Testing Officer, Following this tour of shore duty he was assigned to the pre-commissioning detail for USS Farragut (the first alternating-current powered ship in the Navy) as Engineering Officer. Following the Farragut he served as Executive Officer of the destroyer Twings and then as Commander Officer of the destroyer Aaron ward. He then served a tour of shore duty in the Bureau of Engineering, after which he went to sea as Material Officer on the staff of Commander, Destroyer Flotilla 1 and later in the same capacity on the staff of Commander Destroyers, Battle Force.

During World War II, Captain Carlisle had command of the Tanker Ramapo and upon detachment from that vessel had a year and half tour of duty in the Bureau of Ships, Navy Department, Washington, DC. For serving in the above duty he was awarded a Letter of Commendation, with authorization to wear the Commendation Ribbon, with the following citation:

“While serving in the Bureau of Ships as the Senior Assistant to the Production Assistant to the Head of Construction Branch, was personally responsible for the rapid increase in the production of Naval equipment, and for the timely provisions of this equipment in, spite of material, facilities, and manpower shortages. His performance of duty was marked by great zeal, ingenuity and devotion to duty far beyond that normally expected or required. His contribution to the successful prosecution of the war, particularly during the critical stages was most significant and deserving of the highest praise.”

Ordered to command USS Leedstown, Captain Carlisle served aboard her during the amphibious operations at Levte Lingayen Gulf, Iwo Jima and Okinawa, receiving a Bronze Star Medal with the following citation:

“For distinguishing himself by meritorious achievement as the Commanding Officer of an attack transport during the amphibious assaults in Lingayen Gulf and on Iwo Jima Island. By his excellent seamanship, he ably caused his vessel to quickly and successfully debark the troops and upload vital material onto the assault beaches. By his sound judgement, splendid leadership and outstanding performance of duty, he contributed materially to the success of the assault operations in which the vessel he commanded participated. His conduct throughout distinguished him among those performing duties of a similar nature.”

In August 1945, Captain Carlisle was detached from the Leedstown and ordered to the pre-commissioning detail to USS Albany and assumed command upon her commissioning in June 1946. Reporting for duty as Assistant Chief of Naval Research, for Administration, Navy Department, in May 1947, he served there until September 1947, at which time he was ordered to duty as Assistant Chief of Naval Reserves, for Administration, Naval Reserves, Navy Department.

In addition to the Bronze Star medal and the Commendation Ribbon, Captain Carlisle has the Victory Medal, American Defense Service Medal with Fleet Clasp, and Asiatic-Pacific Area Campaign Victory Medal.