John D. Lodge was born in Washington, DC on 20 October 1903, son of George Cabot and Mathilda Elizabeth Frelinghuysen (Davis) Lodge. He was the grandson of the late Senator Henry Cabot Lodge. He received the degree of Bachelor of Arts from Harvard College in 1925 and later was awarded the degree of Bachelor of Law from Harvard University. During 1925 and 1926 he attended Ecole de Droit, Paris, France.

From 1929 to 1931 he was an attorney with the firm of Crovath, de Gersdorff, Swain and Wood in New York City. In 1931 he began his own practice. From 1932 to 1940 he was employed by motion picture companies in the United States, England, France and Italy, and for two years thereafter by the New York Theater.

Reporting for active Naval service in August 1942, he was assigned to the Special Events Section, Public Relations Office in the Third Naval District, with headquarters in New York, New York. He remained there until April 1943 and in June of that year joined the staff of Commander Naval Forces, Northwest African Waters, as French Naval Rearmament and Naval Liaison Officer.

He had the Naval Reserve Medal; the American Campaign Medal; the European-African-Middle Eastern Campaign Medal; and the World War II Victory Medal. He also had the Legion of Honor with the French rank of Chevalier and the Croix de Guerre, awarded by the French Government. In 1953 he received another foreign decoration: Grand Officer of the Order of Merit from the Republic of Italy.

He was a member of the Eightieth and Eighty-first Congresses, from the Fourth Connecticut District, and in 1950 was elected Governor of Connecticut. In 1953 he served as an Ambassador on special presidential missions to Puerto Rico, Panama, and Costa Rica, and in 1955 was appointed Ambassador to Spain.

He died in New York City, New York on 29 October 1985 and was interned in Arlington National Cemetery. 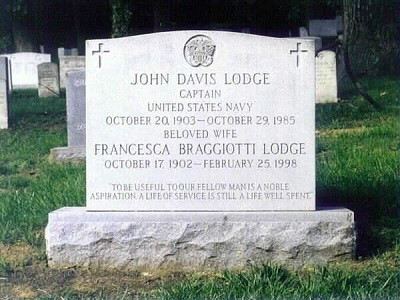