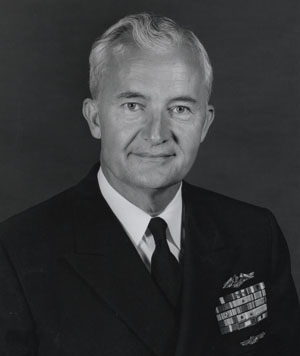 Ignatius Joseph Galantin was born in New York City, on 24 September 1910, son of Ignatius Peter and Mary Elizabeth (Binder) Galantin. He attended Maine Township High School, Des Plaines, Illinois, and had a year of night school at the Armour Institute of Technology in Chicago before his appointment to the Naval Academy in 1929. As a Midshipman he was captain of the fencing team, and in 1933 was intercollegiate champion. Graduated with the class of 1933-A and commissioned Ensign, to rank from 1 June 1933, he subsequently advanced to the rank of Admiral, to date from 19 May 1967.

After graduation from the Naval Academy, he served until December 1935 as junior watch and division officer on board the USS New York, operating with Battleship Division ONE, Battle Force. He then had submarine training at the Submarine School, New London, Connecticut, and in July 1936 joined the USS Argonaut, the largest submarine-minelayer, to serve as first lieutenant and gunnery officer in the Hawaiian Islands area. In June 1940 he reported as executive officer and navigator of the USS S-24, which was transferred to the British early in the World War II period by lend-lease agreement.

In August 1942 he assumed command of the USS R-11. Thereafter, in June 1943 he joined the USS Sculpin and participated in one war patrol in the Pacific area. From August 1943 until December 1944 he was in command of the USS Halibut, which was awarded the Navy Unit Commendation for her tenth war patrol. He took part in the Battle of Leyte Gulf as Commanding Officer of the Halibut, and sank a large Japanese warship off Cape Engano, Philippine Islands. He was personally awarded the Navy Cross, the Silver Star Medal, and two Gold Stars in lieu of the second and third Silver Star Medal, with citations which follow in part:

Navy Cross: "For extraordinary heroism as Commanding Officer of the USS Halibut, during the tenth war patrol of that vessel...in waters of the Pacific War Area, from October 8 to December 1, 1944. A skilled and aggressive leader, (he) penetrated strong enemy escort screens to launch repeated strikes against enemy shipping and, by his expert ship handling, contributed to the success of the Halibut in sinking more than 10,000 tons of enemy shipping and in evading severe hostile countermeasures..."

Silver Star Medal: "For conspicuous gallantry and intrepidity in action as Commanding Officer of USS Halibut on war patrol in enemy Japanese-controlled waters in the Pacific Area. Relentlessly pursuing a hostile convoy for many hours, (he)...sank a large Japanese freighter. Later, contacting a powerful concentration of enemy warships which were well screened and zigzagging at high speed, (he) boldly attacking, severely damaged a vital aircraft carrier..."

Gold Star in lieu of Second Silver Star Medal: "...During the sixth war patrol of the USS Halibut from August 20 to September 15, 1943. Penetrating strong enemy escort screens, (he) pressed home five torpedo attacks against enemy shipping to sink two freighters totaling over 9,000 tons and to damage a destroyer of 1,000 tons. Conducting a running gun engagement with an armed sampan of 150 tons despite poor visibility caused by rain squalls, he riddled the hostile craft and...succeeded in returning his ship safe to port..."

Gold Star in lieu of Third Silver Star Medal: "...By his courage, skill and determination, he delivered aggressive torpedo attacks on heavily enemy vessels, resulting in the sinking of 4,820 tons and damaging 13,000 tons. In addition, he conducted a successful bombardment of a Japanese-held island, causing considerable damage to shore installations..."

Upon his return to the United States in November 1945, he was ordered to the Staff of Commander, Submarines, Atlantic Fleet, and served as personnel officer until July 1947. After duty as executive officer of the USS Proteus, a submarine tender, he served as operations and gunnery officer on the Staff of Commander Submarine Squadron EIGHT. He had command of Submarine Squadron FIFTY-ONE in 1949, and in December of that year reported to the Office of the Chief of Naval Operations, Navy Department, Washington, DC, where he served until July 1952 as head of the Submarine Branch, Fleet Maintenance Division.

He assumed command of the USS Navasota (AO-106) in August 1952, and was awarded a Letter of Commendation, with Ribbon and Combat "V," for "meritorious service as Commanding Officer of the USS Navasota during combat operations against enemy North Korean and Chinese Communist forces in the Korean Theater from 15 February 1953 to 1 June 1953..." The next year he commanded Submarine Squadron SEVEN, and from August 1954 to June 1955 was a student at the National War College, Washington, DC.

Upon graduation from the National War College, he was ordered to the Office of the Chief of Naval Operations, Navy Department, where he served for two years as head of the Submarine Warfare Branch, Undersea Warfare Division. He was Deputy Chief of Staff for Logistics and Administration on the Staff of the Commander in Chief, Allied Forces Southern Europe, stationed in Naples, Italy, from September 1957 until 4 November 1959, then reported as Commander Cruiser Division TWO. In January 1961 he became Director of the Antisubmarine/Submarine Warfare Division, Office of the Chief of Naval Operations (later redesignated Submarine Warfare Division). On 26 February 1962 he was assigned as Special Projects Officer in the Office of the Secretary of the Navy, Navy Department. On 1 March 1965 he assumed duty as Chief of Naval Material. Upon the reorganization of the Navy Department, effective 1 May 1966, he was designated Chief of Naval Material, Naval Material Command. "For exceptionally meritorious service..." from May 1966 to June 1970, he was awarded the Distinguished Service Medal. The citation further states in part:

"Called upon to form the Navy Material Command in May of 1966, Admiral Galantin...was responsible in large measure for the viability and responsiveness which have been the hallmarks of this command since its inception. (His) responsibilities involved planning, research, development, production, maintenance, and support of new and improved weapons systems for the fleet in all areas of warfare. He has initiated and has been instrumental in the development of many of the weapons systems which are currently in service in the Navy and for the development of others which will enhance the combat readiness of the fleets in the future. Playing a vital role in maintaining the high state of material readiness of the Navy's ships and aircraft, (he) contributed substantially to meet its world-wide commitments while simultaneously engaged in armed conflict against the Communist aggressors in Vietnam..."

On 1 July 1970, he was transferred to the Retired List of the US Navy.

Married to the former Virginia E. Jaeckel of New York City, Admiral Galantin had three daughters. and was a member of the New York Society of Military and Naval Officers of the World Wars.