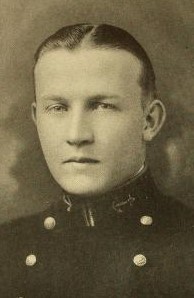 Captain Fitzsimmons was born in Dixon, Illinois on June 12, 1903. He attended public schools there, and Creighton University, Omaha, Nebraska for one year before entering the US Naval Academy, Annapolis, Maryland, as a midshipman in 1922. He was graduated and commissioned Ensign on June 3, 1925, and was promoted in rank at intervals to that of Captain for temporary service on April 27, 1944; his selection to that rank to date from August 1, 1943.

When detached from the Naval Academy, Captain Fitzsimmons had duty in the Nevada, battleship, for more than a year, and in September 1927 assisted with fitting out the aircraft carrier Saratoga and went aboard for duty in November. In September, 1928 he reported to the Naval Air Station, Pensacola, Florida for flight training, and was designated Naval Aviator one year later, September 16, 1929, returning to the Saratoga at the time. He was assigned to a Bombing Squadron and had duty from October 1929 to June 1932. For the two years following, he was on duty involving flying at the Bureau of Aeronautics, Navy Department, Washington, D.C.

From June, 1934 to August, 1942, his duty was continuously with various aviation squadrons, aboard the USS West Virginia, at Pearl Harbor, T.H., and the USS Wright, and was commanding Patrol Squadron 24, attached to that carrier, when the Japanese attacked Pearl Harbor, and during early engagements of the war. In August 1942, he was ordered to the Bureau of Aeronautics, Navy Department, and remained on duty there until he reported, in May 1945, for duty in the USS Mission Bay, with additional duty on the staff of Commander Convoy Escort Piers, Norfolk Group, Sixteenth Fleet.

Captain Fitzsimmons had duty under instruction at the Naval War College, Newport, Rhode Island, from June 1945, for a one year, and since that time has had staff duty on the staff of Commander Marianas Islands, at Guam, and as Aviation Officer on the staff of Commander Amphibious Training Command, Pacific Fleet. In November, 1948 he was named Commander, Tactical Air Control Group One, and the following May, assumed command of the Naval Air Station, Squantum, Massachusetts where he is presently serving.