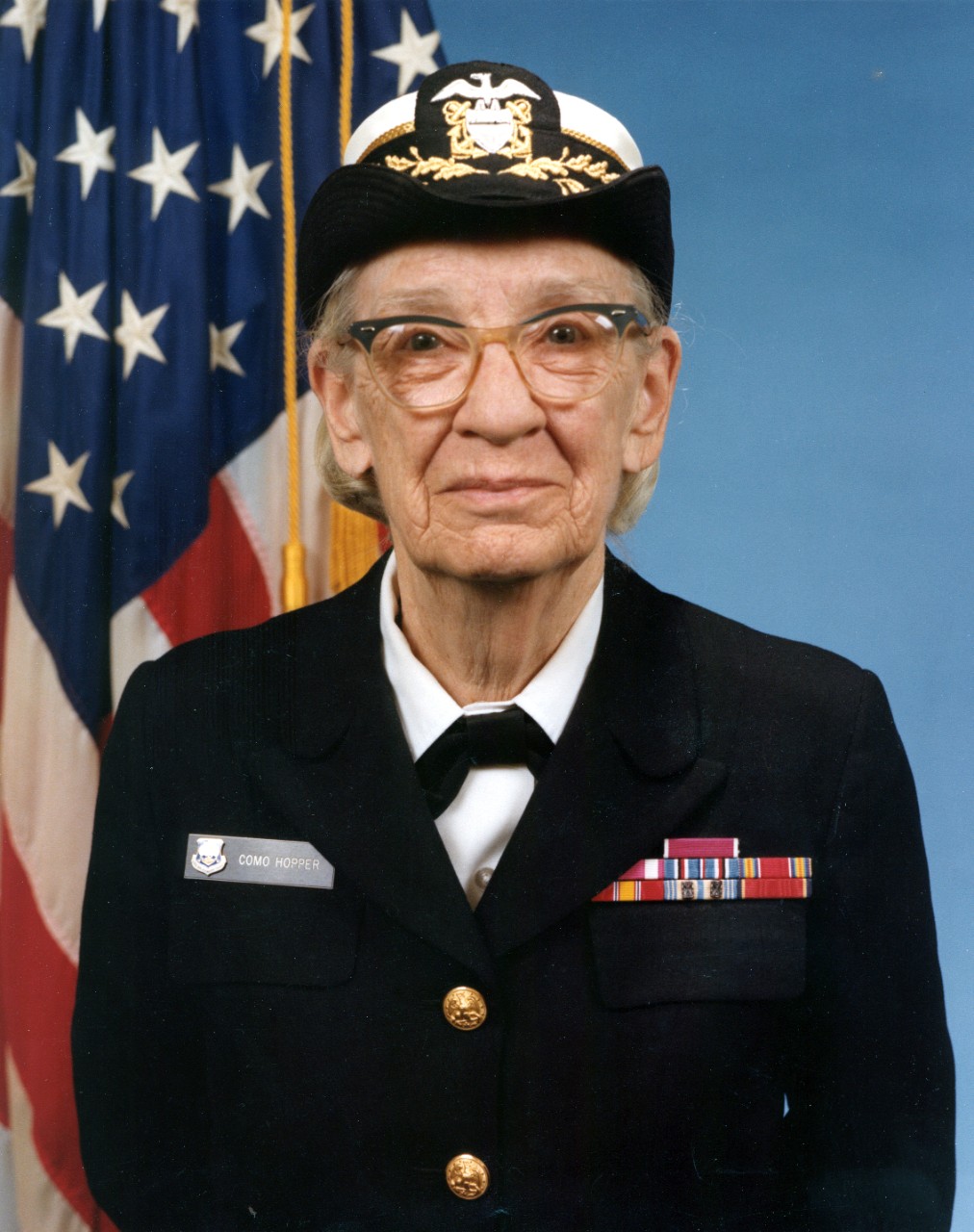 Grace Brewster Murray was born on 9 December 1906 in New York, New York.  She claims as her second hometown, Wolfeboro, New Hampshire, to which she first traveled in the summer of 1907.  She attended Vassar College, graduating in 1928, with Phi Beta Kappa and a Vassar College Fellowship.  She attended Yale University, where she received the degrees of MA in 1930, and PhD in 1934, together with election to Sigma Xi and two Sterling Scholarships.

She returned to Vassar as an Assistant in Mathematics in 1931, becoming successively, Instructor, Assistant Professor, and Associate Professor.  During this time, she received a Vassar Faculty Fellowship and studied at New York University (1941-42).

In December 1943, she entered the United States Naval Reserve and attended the UNSR Midshipman’s School-W at Northampton, Massachusetts.  Upon graduation, she was commissioned Lieutenant (JG) and ordered to the Bureau of Ordnance Computation Project at Harvard.  Here, she learned to program the first large-scale digital computer, Mark I.  In 1946, she resigned from her leave-of-absence from Vassar and joined the Harvard Faculty as a Research Fellow in Engineering Sciences and Applied Physics at the Computation Laboratory where work continued on the Mark and Mark II computers for the Navy.  In 1946, she received the Naval Ordnance Development Award.

In 1949, she joined as Senior Mathematician, the Eckert-Mauchly Computer Corporation in Philadelphia, then building the UNIVAC I, the first commercial large-scale electronic computer.  She remained with the company as a Senior Programmer when it was bought by Remington Rand and later merged into the Sperry Corporation.  She was appointed Systems Engineer, Director for Automatic Programming in 1952 when she published the first paper on compilers.  In 1964, she became Staff Scientist, Systems Programming.  She retired from the UNIVAC Division of the Sperry Rand Corporation in December 1971, while on military leave.

During the years from 1952 to the present, she has published over fifty papers and articles on software and programming languages.  Her interest in applications programming sent her to the first meeting of CODASYL with a strong interest in the development of COBOL.  She has also served on the ANSI Xe.4 Committee on the standardization of computer languages.  She also served on the CODASYL Executive Committee.

She maintained he close connection with the Naval Reserve and was successively promoted to Lieutenant, Lieutenant Commander and Commander.  At the end of 1966, she was retired with the rank of Commander in the Retired Reserve.  She was recalled to active duty on 1 August 1967.  On 2 August 1963, she was promoted to the rank of Captain on the retired list of the Naval Reserve.  She is presently serving, on active duty, with the Naval Data Automation Command, as NAVDAC-OOH.

[Note: Rear Admiral Grace Hopper retired on 14 August 1986 and passed away on 1 January 1992. She was buried in Arlington National Cemetery. The Guided Missile Destroyer USS Hopper (DDG-70) is named in her honor.]

MEMBERSHIP IN OTHER ORGANIZATIONS:

“Compiling Routines” Computers and Automation – May 1953

“Computers and Their People” Proceedings of the NOMA Conference, Kyoto, Japan, Jun 1965

“A Language of Their Own” Financial Times, London, 11 Dec 1967, Annual Computer Supplement