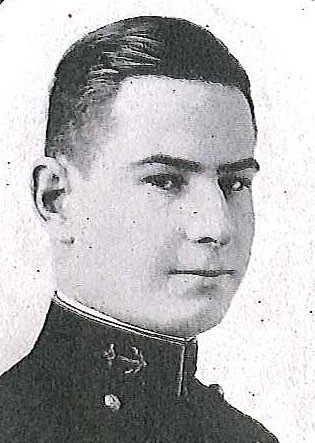 Harold Foster Fick was born in St. Joseph, Missouri, on January 3, 1899, son of Julius B. and Lillie A. (Sleeter) Fick. He attended public schools of Chicago, Illinois, and Winnfield, Louisiana, and entered the US Naval Academy, Annapolis, Maryland, on appointment from the Eighth District of Louisiana in June 1916. He had active service in World War I as a Midshipman on board USS Rhode Island during the summer of 1918, and was a one-striper at graduation on June 6, 1919, with the Class of 1920. Commissioned Ensign to rank from June 7,1919, he subsequently attained rank to the Retired List on December 1, 1946, was advanced to the rank of Rear Admiral on the basis of combat awards.

After graduation from the Naval Academy in June 1919, he was at sea until June 1922, serving successively in USS Troy, USS New Jersey and USS Hunt. He was designated Naval Aviator on June 23, 1923, at the Naval Air Station, Pensacola, Florida, where he completed flight training, and was ordered to Patrol Squadron Six, attached to the seaplane tender Whight. In November of that year he reported to the Naval Air Station, Hampton Roads, Virginia, to assist in establishing Observation Squadron Six, and subsequently served with that Squadron, the first to place planes on board battleships of the Atlantic Fleet, attached to the New York at the time of his detachment in January 1926.

Returning to Pensacola, he served as a flight instructor until July 1928, then had consecutive duty with Observation Squadron Two, aviation unit of USS Tennessee, and Observation Squadron Four, of USS California. From December 1929 until June 1932, he again served at the Naval Air Station, Pensacola, Florida, and for two years thereafter was Executive Officer of Torpedo Squadron Two, based on USS Saratoga, aircraft carrier. After duty until June 1935 with Fighting Squadron Two, based on the carrier Lexington, he had shore duty at the Navy Department, Washington, DC, serving two years in the Plans Division of the Bureau of Aeronautics.

From September 1937 until November 1938 he was Tactical and Gunnery Officer of the Staff of Commander carrier Division Two, USS Yorktown, flagship, and in that capacity served under Admirals Charles A. Blakely and William F. Halsey, Jr. USN. He next commanded the converted seaplane tender Childs in the Pacific, December 1938 to May 1940, and after brief duty at the Naval Air Station, Pensacola, assisted in the establishment of the Naval Air Station, Corpus Christi, Texas. There, from the commissioning of that station, March 12, 1941, until October 1942, he served as Superintend of Training, and for two months thereafter was Chief of Staff to the Chief, Naval Air Intermediate Training Command. While in the former assignment he had temporary additional duty early in 1942 as Naval Observer (Air) in London, England.

In December 1942 his command was transferred to Pensacola, and he continued duty as Chief of Staff until May 1943. “For outstanding performance of duty as Chief of the Naval Air Intermediate Training Command at Corpus Christi, Texas, and Pensacola, Florida, from October 2, 1942, to May 14, 1943…” he was awarded a Letter of Commendation, with Ribbon, from the Secretary of the Navy, which continues, in part:

“ … As a result of his efficient planning and untiring effort, Captain Fick was instrumental in the creation of the new Intermediate phase of fighting training, involving improvements and standardization of training syllabi, equalizing of student loads, procurement and assignment of aircraft and the construction of additional facilities. Faced by numerous handicaps in organizing the program at a time of sudden expansion, Captain Fick displayed a through comprehension of the problem involved and, by his aggressive initiative, contributed to the efficient, economical and superb training of our Naval Aviators during a period of vital and grave importance…”

From May 22, 1943 until July 11, 1944, he commanded USS Santee, an escort aircraft carrier, which operated in the Atlantic and later in the Pacific. The Santee was awarded the Presidential Unit Citation, and he was personally awarded the Legion of Merit and Bronze Star Medal, each with Combat “V,” The citation follow, in part:

Presidential Unit Citation:  “ For extraordinary heroism in action against enemy forces in the air, ashore and afloat. Operating in the most advanced areas, the USS Santee and her attached air squadrons struck with sustained fury at hostile warships, aircraft, merchant shipping and shore installations in the face of frequent and prolonged enemy air attacks. During the historic Battle for Leyte Gulf, the valiant Santee withstood successively the shattering explosion of a suicide plane in her flight deck and a torpedo hit in her side, stoutly conducting flight operations and fighting her antiaircraft guns throughout the period of emergency repairs… She sent out her planes to cover our landing operations and land offensives and to destroy the enemy’s vital airfields and his camouflaged dispersal areas. (Her) illusions record of combat achievement reflects the highest credit upon her gallant officers and men and upon the US Naval Service.”

Legion of Merit: “ For exceptionally meritorious conduct in the performance of outstanding services… as Commanding Officer of a US Aircraft Carrier during action against enemy Japanese forces in the forward areas of the Pacific from May 1943, to July 1944. Valiant and aggressive in the performance of duty, Captain Fick operated successfully for extended periods of time in dangerous waters, rendering invaluable assistance in the support of vital amphibious activities… (and) contributed materially to our sustained drive against the Japanese.”

Bronze Star Medal:  “For meritorious achievement as Commanding Officer of an Escort Carrier and as an Atlantic Fleet Anti- Submarine Task Group Commander in action against the enemy in the Atlantic Area. During a period of intense submarine and anti-submarine activity, Captain Fick maintained a continuous offensive, directing the forces under his command in locating hostile undersea craft and in launching aggressive attacks. By his forceful leadership and determined tactics, (he) contributed essentially to the sinking or probable destruction of a large proportion of the German submarine attacked.”

On August 7, 1944, he reported to the Office of the Deputy Chief of Naval Operations (Air), Navy Department, DC, where he served as Director, Aviation Planning Division, until his retirement became effective, December 1, 1946, and he was released from all active duty on December 19.