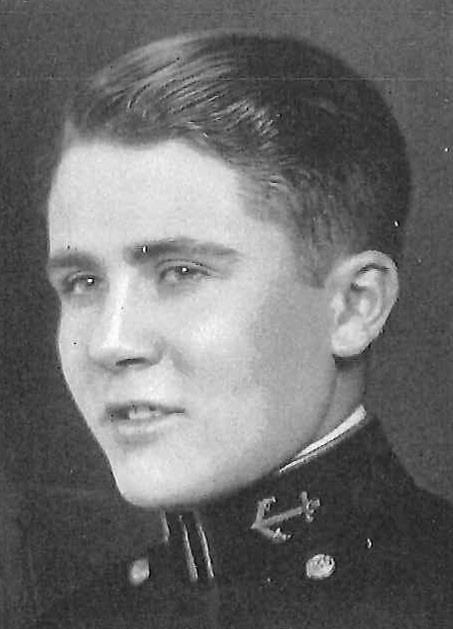 John Joseph Cassidy, Jr., was born in Altoona, Pennsylvania, on December 9, 1915, son of John J. and Mary McDonough Cassidy. He attended John Carroll University in Cleveland, Ohio, after graduation from Cathedral Latin High School there, and entered the U.S. Naval Academy, Annapolis, Maryland, on June 15, 1934, on appointment from Ohio. He was graduated with the degree of Bachelor of Science and commissioned Ensign in the US Navy on June 2, 1938, and through subsequent advancement and his transfer from the Line to the Civil Engineer Corps of the Navy, he attained the rank of Captain, CEC, USN, to date from July 1, 1956.

After graduation from the Naval Academy in June 1938, he was assigned to USS West Virginia, and served as a junior officer in Engineering and Gunnery Departments of that battleship during the next two years. He then reported to Rensselaer Polytechnic Institute, Troy, from which he received the degrees of DCE and MCE in May 1942. During the next three months he had further instruction at Camps Allen and Bradford, then returned to Rensselaer to serve from August 1942 to March as an instructor, in the grade of Lieutenant, CEC, USN.

He served as an Area Commander at Camp Peary, then from November 1943 until February 1945 was Executive Officer of the Fifth Naval Construction Regiment. During the remaining period of World War II he had month’s duty on the Staff of Commander Construction Troop, Tenth Army, and seven months as Executive Officer of the Thirty-Ninth Naval Construction Regiment. When detached in December 1945 he was ordered to the Bureau of Yards and Docks, Navy Department, Washington, DC, where he remained until May 1948 as Director, Research Division. In June 1948 he reported as Proving Ground Officer, Construction Battalion Center, Port Hueneme, California.

From June 1950 until October 1951 he was assigned to the Staff of Commander Naval Force, Marianas, his duties in Planning and Design and as Officer in Charge of Construction. He then returned to the Navy Department where, for two years, he was CEC Detail Officer. On November 1953 he became Public Works Officer and Resident Officer in Charge of Construction at the Naval Air Station, Whidbey Island, Seattle, Washington. He left there in 1956, and after a tour of duty at the Naval Construction Battalion Center, Davis Ville, Rhode Island, was ordered in February 1959 to the US Navy Academy to serve as Public Works Officer.

On May 8, 1962, he was ordered detached from duty at the Naval Academy and to duty as Director, Northwest Division, Bureau of Yards and Docks, Seattle, Washington, and in April 1964 was transferred to duty as Commanding Officer, Naval Public Works Center, Naval Base, San Diego, California.

For World War II service, Captain Cassidy was awarded the Bronze Star Medal with citation to follow: “For heroic service as Officer-in-Charge of headquarters Company, Commander Construction troops, during operations against enemy Japanese forces in the Ryukyu from April to August 1945. Working under constant threat of attack and other conditions incident operations, Commander (then Lieutenant Commander) Cassidy personally directed the immediate provision of food and shelter for staff personnel and established and maintained an effective perimeter guard against infiltration and sabotage attempts of the enemy. His organizational ability, courage and devotion to duty were important factors in the completion of a construction program of unprecedented size and upheld the highest traditions of the United States Naval Service.”