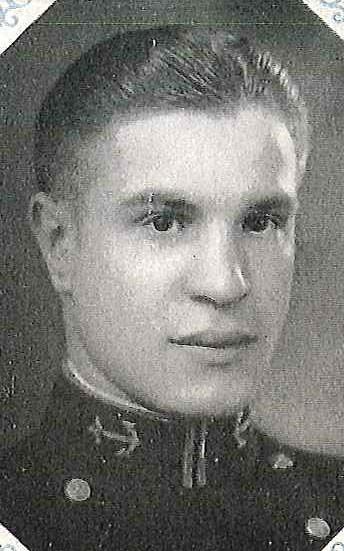 George DeMetropolis was born in New York, NY, on April 5, 1909, son of John and Helen (Gavaris) DeMetropolis. After attending high school in New York City, he entered the US Naval Academy and was graduated and commissioned Ensign on June 4, 1931. His first years at sea were spent in the battleship Texas, as a junior Officer in gunnery and engineering. He then served in the submarine tender Fulton and the destroyers J. D. Edwards and Dent, his duties primarily as Gunnery Officer and First Lieutenant. In July 1938 he was transferred to the Third Naval District and Navy Yard, New York, at Aide to the Commandant and Assistant Shop Superintendent.

Returning to sea in March 1941 he was Assistant Damage Control Officer and Assistant First Lieutenant on board USS North Carolina. Transferred to USS Pringle in April 1943, he was first Navigator, then Commanding officer of that vessel until June 1944. He was twice awarded the Bronze Star Medal, with Combat “V,” while in that assignment. He next served for two years as Commanding Officer of USS Wallace L. Lind and was awarded a Gold Star in lieu of a Third Bronze Star Medal, with Combat “V,” for meritorious service in the Western Pacific War Area. He was on board the Lind when she was present during the ceremonies in Tokyo bay marking the Japanese surrender.

In August 1946 he reported for duty at Columbia University in New York, where he was Executive Officer of the Naval Reserve Officers’ Training Corps Unit. From July 1947 until June 1950 he was Fuel and Cargo Officer with the US Naval Mission to Greece. For his services to that country he was decorated with the King George I Order of Commander.

He returned to the Third Naval District where he was Director of Distribution for a year, and Director of Naval Personnel until December 1952, at which time he was assigned duty afloat as Commanding Officer of USS Wrangell. Relieved of command of that ammunition ship in March 1954, he was assigned as Administrative Officer at the New York Naval Shipyard, Brooklyn, New York. Following several months instruction at the Naval War College, Newport, Rhode Island, he returned to Greece to serve at the Royal Hellenic War College as Advisor of the Naval Section, Joint US Military Aid Group, with headquarters in Athens.

Royal Order of George I, rank of Commander, from the government of Greece

Bronze Star Medal: “For meritorious service as Commanding Officer of the USS Pringle, during operations against enemy Japanese forces in the Solomons Islands and Bismarck Archipelago from October 1943, to March 1944…(He) efficiently commanded his ship in the initial landings on Treasury, Green and Emirau Islands, assisted in screening eight echelons to Bougainville and carried out many barge sweeps which resulted in the destruction of several hostile barges loaded with supplies and personnel…”

Gold Star in lieu of the Second Bronze Star Medal: “For meritorious achievement as Navigator of the USS Pringle, serving as Flagship for a Mining Detachment, during minelaying and bombardment operations against enemy Japanese forces on Kolombangara, Shortland and Bougainville, British Solomon islands, on the night of June 29, 1943. Operating in poorly charted waters near reefs surrounding enemy-held shores, (he) skillfully navigated his hip, leading the minelayers throughout the hazardous mission. His seamanship, courage and devotion to duty were important factors in the successful mining of waters used extensively by enemy vessels…”

Gold Star in lieu of the Third Bronze Star Medal: “For meritorious service as Commanding Officer of the USS Wallace L. Lind during action against enemy Japanese forces in the Western Pacific War Area from January 5 to May 15, 1945…(He) led his command in widespread actions against the enemy from Luzon, the Indo China Coast and Formosa to Iwo Jima, Okinawa and the Japanese Home Islands. Repeatedly subjected to fierce hostile air attacks while operating with a Fast Carrier Task Force, the Wallace L. Lind individually destroyed two enemy aircraft and aided in the destruction of many other Japanese planes attacking the formation…”