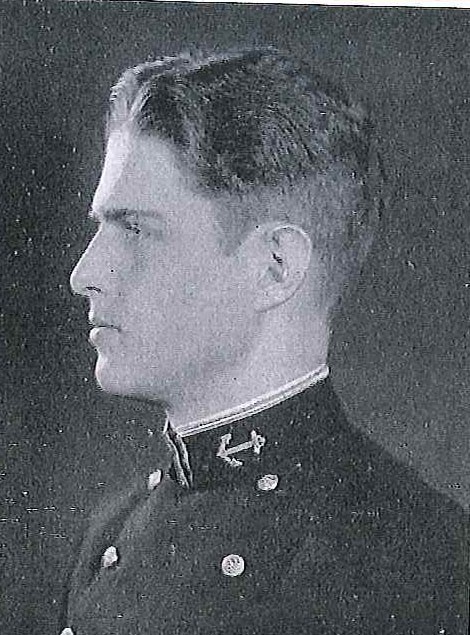 Charles Marriner Bertholf was born in San Francisco, California, on December 5, 1912, son of Mrs. Mary (Marriner) Bertholf and the late Captain Wallace Bertholf, (Class of 1901, USNA). He attended Galileo High School in his native city and Van Nuys High School, Los Angeles, California, and prior to his appointment to the US Naval Academy, Annapolis, Maryland, from the State of California in 1930, he prepared at the Werntz Preparatory School also located in Annapolis. Graduated and commissioned Ensign on May 31, 1934, he progressed in rank to that of Captain, to date from July 1953.

Following graduation from the Naval Academy in 1934, he reported aboard USS Detroit, and in May 1939 transferred to USS Pruitt. Detached from the latter in November 1941, he joined the staff of the Commander Service Force, US Pacific Fleet, as Aide and Flag Lieutenant. He was serving in that capacity at Pearl Harbor, Territory of Hawaii, when the Japanese attacked the Naval Base there on December 7, 1941.

Returning to the United States in June 1943, he became Discipline Officer at the Naval Academy, where he remained until August 1944, and in October of that year assumed command of USS Callaghan. Under his command that destroyer participated in the Philippine Liberation and in action at Iwo Jima and Okinawa. The Callaghan, last destroyer sunk in World War II, was struck by a Kamikaze plane off Okinawa on July 29, 1945, minutes before she was scheduled to return to the United States. For outstanding services while commanding the Callaghan he was awarded the Bronze Star Medal, the Gold Star in lieu of the Second Bronze Star Medal, both with Combat “V,” and the Navy Cross. The citations follow in date sequence:

Gold Star in lieu of the Second Bronze Star Medal: “For meritorious achievement…against enemy Japanese forces in the vicinity of Luzon, Formosa, the Ryukyus, French Indo China and China, from November 22, 1944 to February 9, 1945…(He) organized his ship to protect important heavy units of our Fleet from enemy submarine aircraft and surface attacks, persevering in his efforts without interruption despite adverse weather conditions….”

Bronze Star Medal: “For heroic achievement…in action against enemy forces in Japanese home waters from February 10 to March 4, 1945. Participating in carrier strikes in the Tokyo, Okinawa Gunto and Iwo Jima Areas, Commander Bertholf engaged an enemy picket boat on the morning of February 18 and contributed to its destruction and to the capture of eight prisoners of war…”

Navy Cross: “For extraordinary heroism as Commanding Officer of the USS Callaghan…in the vicinity of Okinawa Jima from March 25 to June 22, 1945. With his hip relentlessly attacked by hostile suicide planes and boats in waters that were infested with mines and submarines, Commander Bertholf furnished fire support for our troops on the island for long and intense periods of time, often firing on many targets simultaneously during the night when the area was illuminated by starshells. In the course of this long and arduous period, he directed the fire of his ship in destroying one midget submarine and downing six hostile aircraft…”

From June 1946 to August 1947 he commanded USS Frank Knox, which for six months operated on China Station, and when relieved of that command, he became Assistant Naval Attache at the American Embassy, Stockholm, Sweden. He remained there until November 1949, and the next month was assigned to the Central Intelligence Agency, Washington, DC. In October 1951 he assumed command of USS Cabildo. Which operated for nine months in Korean waters and in February 1953 was ordered to duty as US Naval Attache and US Naval Attache for Air, The Hague, The Netherlands. In July 1955 he was transferred to the Tenth Naval District, Headquarters at San Juan, Puerto Rico, and there serves as District Intelligence Officer.