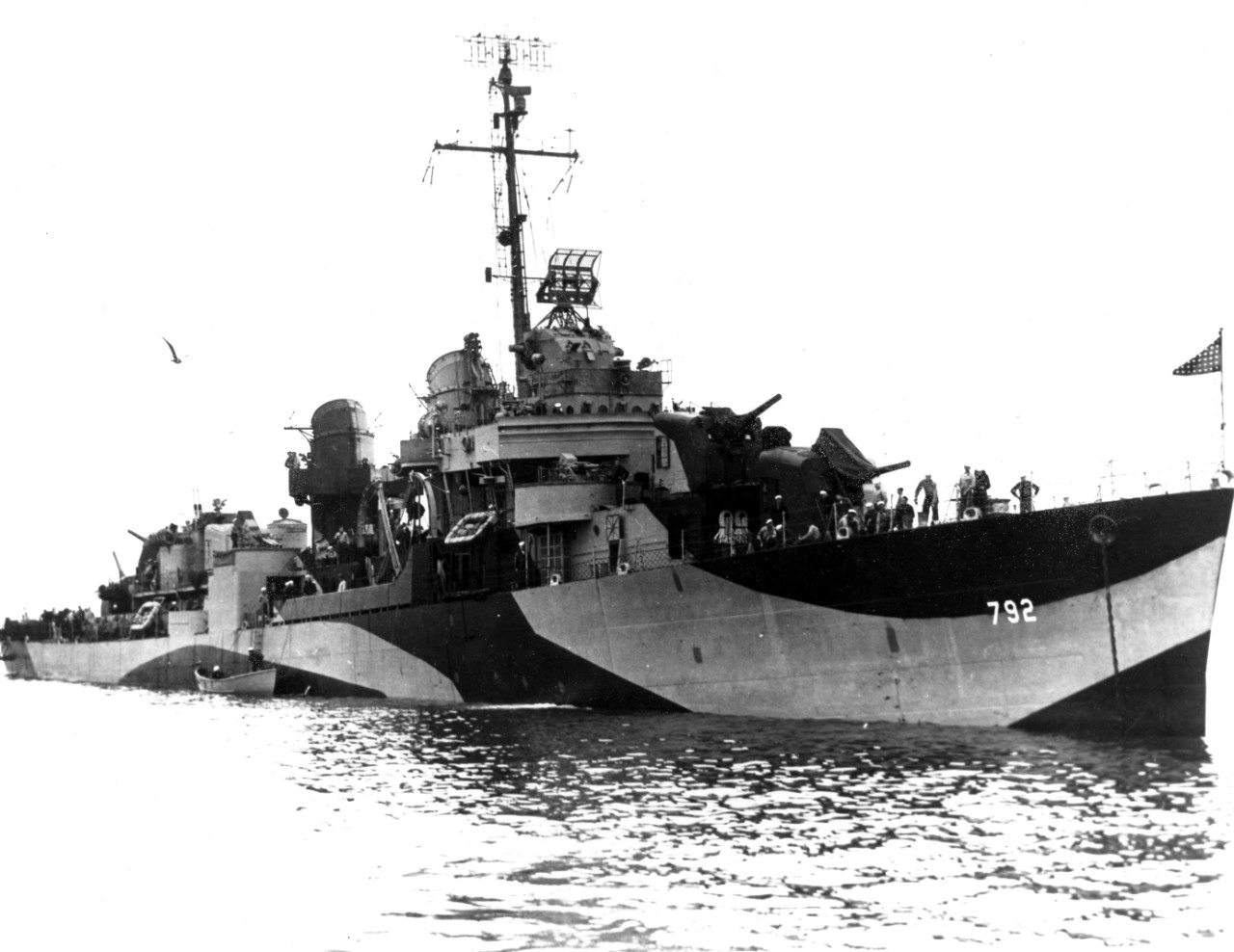 Born in San Francisco, Calif., 26 July 1890, Daniel Judson Callaghan graduated from the Naval Academy in 1911. His prewar service included command of Truxtun (Destroyer No. 14), staff duty afloat and ashore, and duty as naval aide to the president. He commanded San Francisco (CA-38) from May 1941 to May 1942, then served as chief of staff to Commander, South Pacific area and South Pacific Force. Rear Admiral Callaghan was killed in action in the bitter Naval Battle of Guadalcanal 13 November 1942 while commanding forces that helped turn back a far stronger Japanese fleet. He posthumously received the Congressional Medal of Honor for extraordinary heroism during the action in which he gave his life. 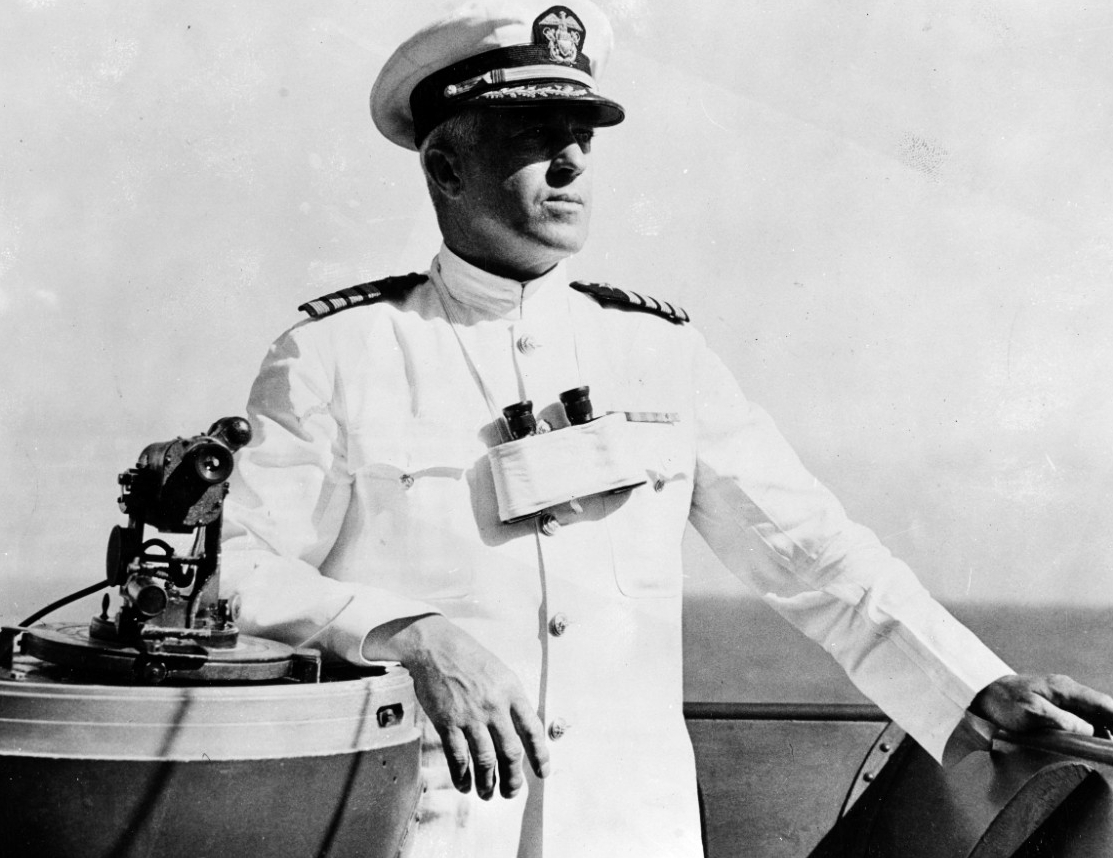 Captain Daniel J. Callaghan photographed on the bridge of San Francisco (CA-38), circa 1941-1942. As a rear admiral with San Francisco as his flagship, he led U.S. Navy task force during the Naval Battle of Guadalcanal, 12-13 November 1942, and was posthumously awarded the Medal of Honor for his extraordinary heroism in that action. Official U.S. Navy photograph now in the collections of the National Archives. Catalog#: 80-G-20824.

Callaghan sailed from the west coast 5 February 1944 to plunge into action with fast-striking 5th Fleet in smashing air raids on the Palaus, Yap, Ulithi, and Woleai from 30 March to 1 April. Based on Manus in April, Callaghan supported the Hollandia operation through important services as picket ship during air strikes, and screening the valuable tankers.

From June to August 1944 Callaghan provided screen for escort carriers softening up, and later supporting the invasions of Saipan, Tinian, and Guam. At Saipan, Callaghan's guns joined in driving off a heavy Japanese air attack on 17 June, helping splash three enemy planes. Fanshaiv Bay (CVE-70) was struck by a bomb in this attack, and Callaghan shielded the crippled escort carrier safely back to Eniwetok. Late in August Callaghan began operations as escort for air strikes on the Palaus, Mindanao, Luzon, and the Central Philippines in support of the invasion of the Palaus, a stepping stone to the Philippines.

With the long-awaited return to the Philippines scheduled for mid-October 1944, Callaghan steamed in the screen of the carrier force conducting essential preliminary neutralization of Japanese airfields in Formosa and Okinawa. During a heavy enemy air attack on 14 October, Callaghan joined in downing several planes. Sailing on to stand guard off the invasion area on Leyte, Callaghan's force contributed air power in the decisive Battle for Leyte Gulf, which insured the Allied advance in the Philippines against the desperate Japanese efforts to break up the landings. After pursuing Japanese cripples fleeing north, Callaghan returned to support the Philippine operations, in company with the 3d Fleet, for air strikes on Luzon. En route, on 3 November, Reno (CL-96) was torpedoed, and Callaghan stood by to protect the stricken cruiser until relief forces arrived, when Callaghan was able to rejoin her group for the strikes. Through December, she participated in more air strikes on the Central Philippines, and in January 1945, the destroyer sailed with the 3d Fleet for air raids on Formosa, Luzon, Indo-China, Hong Kong, and the Nansei Shoto. 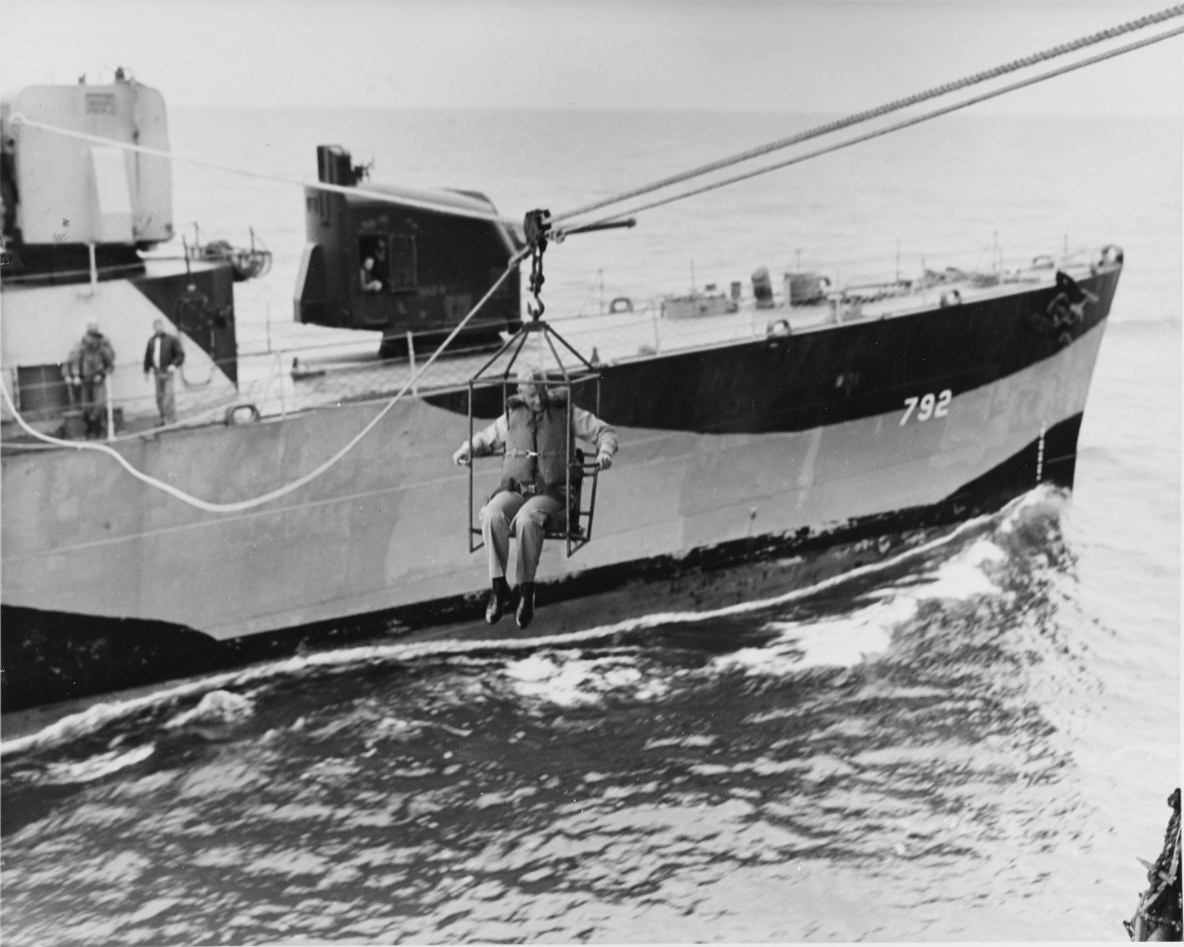 Commodore Arleigh A. Burke, chief of staff to Commander, Task Force 58, is highlined from Callaghan (DD-792) to Lexington (CV-16) while off Iwo Jima on 18 February 1945. Photographed from on board Lexington, with Callaghan's starboard bow in the background. The latter's camouflage appears to be Measure 32, Design 7D. Official U.S. Navy photograph now in the collections of the National Archives. Catalog#: 80-G-307034.

Through the following months, Callaghan operated at the same active pace, screening carrier strikes pounding Iwo Jima, Okinawa, and the Tokyo area. Callaghan assisted in sinking a Japanese picket boat on 18 February, and on 3 March joined the bombardment of Parece Vela. In late March she joined a battleship force at Ulithi, and from this base sailed for the preinvasion bombardment of Okinawa, where she threw harassing fire ashore during the night of 26 March. This initiated prolonged fire support and screening duty in the dangerous waters off Okinawa during which, in addition to invaluable aid to the troops, Callaghan joined in the sinking of a Japanese midget submarine and in the kill of three dive bombers.

On 9 July 1945, Callaghan took station on the embattled radar picket line, where on 28 July she drove off a biplane intent on suicide with well-directed fire, but the plane, skimming low and undetected, returned to strike Callaghan on the starboard side. It exploded and one of the plane's bombs penetrated the after engine room. The destroyer flooded, and the fires which ignited antiaircraft ammunition prevented nearby ships from rendering aid. Callaghan sank at 0235, 28 July 1945, with the loss of 47 members of her valiant crew.