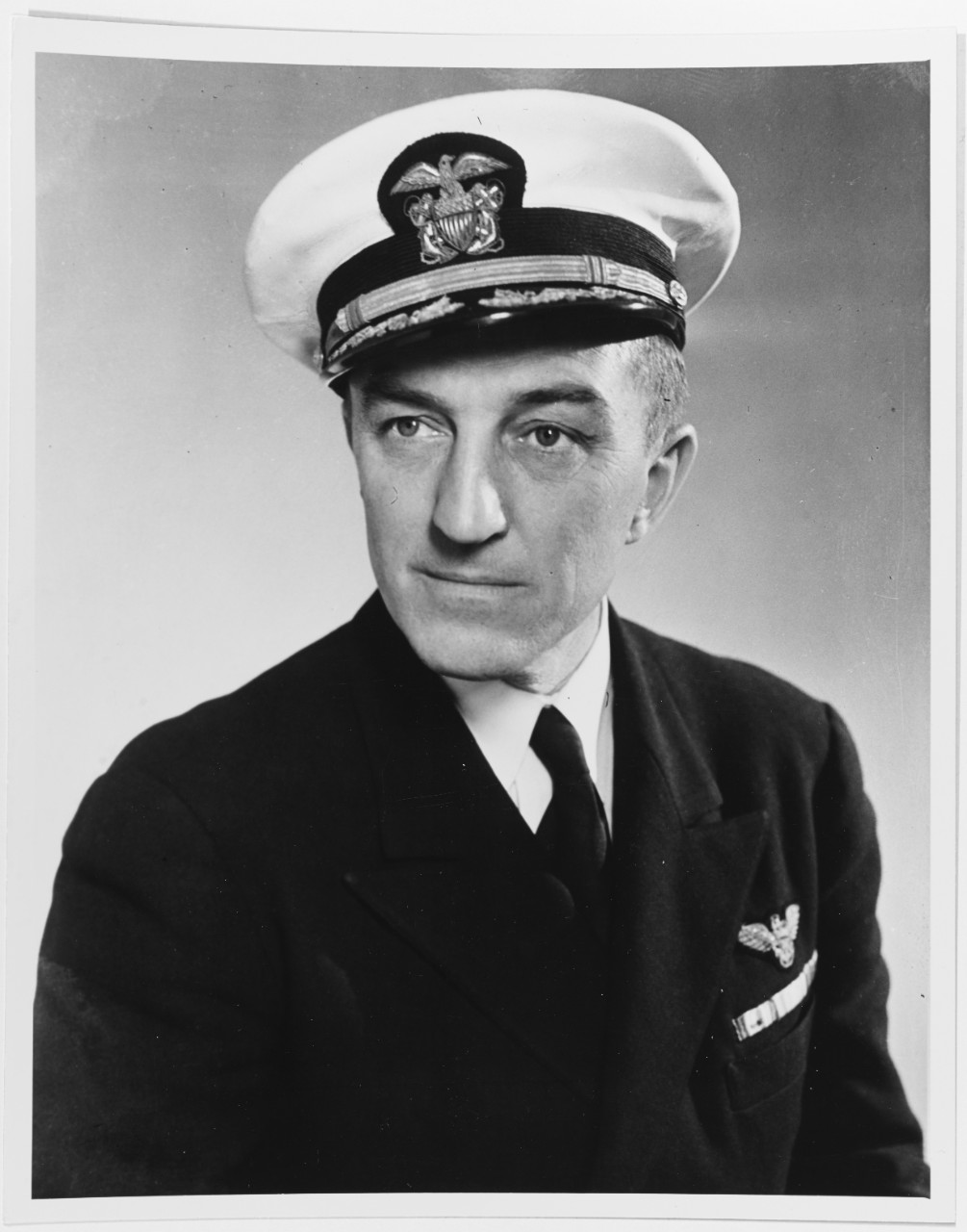 Thomas Lamison Sprague was born in Lima, Ohio, on 2 October 1894, son of Grant Madison Sprague and Olivia Lamison Sprague, both of pre-Revolutionary stock. He is the eleventh generation of male descendants of William Sprague who settled in Massachusetts in 1628 from Dorsetshire England. He attended public schools in Lima and the Ohio State University, at Columbus, before his appointment to the US Naval Academy, Annapolis, Maryland, from the Fourth District of Ohio in 1914. While he was a Midshipman he was Managing Editor of the Log. Graduated and commissioned Ensign on 29 June 1917, with the Class of 1918, he subsequently advanced to the rank of Vice Admiral, to date from 15 August 1949. He was transferred to the Retired List of the US Navy on 1 April 1952, and advanced to the rank of Admiral on the basis of Combat Awards.

After graduation from the Naval Academy in June 1917, he was assigned to the USS Cleveland, which operated on patrol and convoy service during World War One. In April 1918 he reported for duty in connection with the training of officers and men of the Navy and Naval Reserve at receiving ships, camps and schools in the Sixth Naval District, headquarters at Charleston, South Carolina. He was detached in July of that year to assist in fitting out the USS Montgomery at the Newport News Shipbuilding and Drydock Company, Newport News, Virginia, and was Engineer of that destroyer from her commissioning, 26 July 1918, until 1 January 1920, when he became her Commanding Officer.

Detached from the Montgomery in November 1920, he reported to the Naval Air Station, Pensacola, Florida, for flight training, and was designated Naval Aviator on 11 August 1921. Serving briefly at the Naval Air Station, Anacostia, DC, he reported in November, that year, for duty on the Staff of Commander Aircraft, Pacific Fleet (later redesignated Commander Aircraft Squadrons, Battle Force). In 1922 he was assigned to Aircraft Squadron SPOT 4 (attached to the aircraft tender Aroostock, airplane tender), which later became Observation Squadron 2 before his detachment in June 1923.

For three years he had duty at the Naval Air Station, Pensacola, and in July 1926 reported to Aircraft Squadrons, Battle Fleet, serving with Observation Squadron ONE, based on the aircraft carrier Langley, and later with the aviation unit of the USS Maryland. Detached from the latter in July 1928, he had a three year tour of duty at the Naval Air Station San Diego, California. In July 1931 he assumed command of Scouting Squadron 6, and while so serving had additional duty as Aide to Commander Cruiser Division THREE, the USS Concord, flagship. In June 1932 he was transferred to command of Scouting Squadron 10, attached to Cruiser Division FIVE, with additional duty as Commander of the Cruiser Wing of the Cruiser Command, US Fleet, and on the staff of Commander Cruisers, US Fleet.

Duty as Superintendent of the Aeronautical Engine Laboratory, Naval Aircraft Factory, Philadelphia, Pennsylvania, preceded a year's duty as Air Officer of the USS Saratoga, and a second year as Navigator of the USS Langley. In June 1937 he returned to the Naval Air Station, Pensacola, where he served for three years as Superintendent of Aviation Training. He was again ordered to sea, and from June 1940 until July 1941 served as Executive Officer of the USS Ranger. He assisted in the conversion of the USS Pocomcke, and was commanding that vessel at the outbreak of World War II.

After fitting out the USS Intrepid at the Newport News Shipbuilding and Drydock Company, he commanded that aircraft carrier from her commissioning, 16 August 1943, until March 1944. Under his command, the Intrepid participated in the campaign leading up to the capture of the Marshall Islands and the first carrier attacks on Truk Atoll. During the night after the first raid, she was attacked by night flying Japanese torpedo planes and struck by a torpedo, the explosion jamming her rudder and destroying the steering engines and flooding the after end of the ship. He ordered a sail rigged to assist in steering control, headed the ship clear of the battle area and returned the Intrepid 6000 miles to San Francisco for repairs. He was awarded the Legion of Merit 'For exceptionally meritorious conduct... during the attack on Truk Atoll in the Caroline Islands on February 16-17, 1944...(when) under the skillful leadership of Captain Sprague, the damage was brought under control and the ship returned to a safe port under her own power...'

Returning to the United States in March 1944, he had brief duty as Commander Fleet Air, Alameda (California), and in July assumed command of Carrier Division 22. That division, under his command, took part in the capture of Saipan and Guam in the Marianas and of Morotai in the New Guinea Campaign. During the following October, in the initial assault phase of the invasion of Leyte, Philippine Islands, units under his command furnished strategical and direct support to the successful Leyte landings of troops by conducting anti-submarine and combat air patrols. He was awarded a Gold Star in lieu of the Second Legion of Merit 'For distinguishing himself by exceptionally meritorious conduct...as Commander Task Group 77.4 and the Escort Carrier Task Group...in the planning of the largest amphibious operation undertaken in the Southwest Pacific Area, the invasion of Leyte on 20 October 1944...'

He was awarded the Navy Cross, with citation as follows: 'For...extraordinary heroism...while commander of an escort carrier task group engaged in the support of landings on a heavily defended enemy-held island base. In the Battle of Samar Island on 25 October, in action with Japanese battleships, cruisers and destroyers, while subjected to bombardment, torpedo attacks, and suicide dive bombing attacks, each of the units of his command preformed its duties in an outstanding manner...This attack was the major element in turning back a powerful Task Force of the Japanese Fleet composed of battleships, cruisers and destroyers with heavy losses and damage, and without accomplishing its objective. A situation replete with danger was turned into a brilliant victory...'

Admiral Sprague is also entitled to the Ribbon for, and a facsimile of the Presidential Unit Citation awarded the officers and men of the USS Sangamon, his flagship during the Philippine operations.

'Utilizing the maximum striking power of the forces under his command, Rear Admiral Sprague pressed home devastating attacks, directing destruction strikes against aircraft and support industries, installations and transportation facilities and concentrations of naval vessels at Yokosuka, Kure, and Kobe... (His) fearless leadership and expert tactical control of the carriers, battleships, cruisers and destroyers in Task Group 38.1 were vital factors in the infliction of extensive damage to the enemy and in the completing of hazardous missions without damage to his own ships...'

He flew his flag, as Commander Carrier Division 3, in the USS Hancock, and in the USS Wasp during part of the period from 10 October 1944 to 15 August 1945, and each carrier was awarded the Navy Unit Commendation. He is entitled to wear the Navy Unit Commendation Ribbon with bronze star. After his return to the United States he reported on 10 January 1946, as Deputy Chief of Naval Personnel, Navy Department, Washington DC. On 22 February 1947, he became Chief of the Bureau of Naval Personnel, and served in that capacity until September 1949, and in October assumed command of Air Force, Pacific Fleet. He was later assigned additional duty as Commander First Task Fleet, with Headquarters at San Diego, California. He was relieved of all active duty, and transferred to the Retired List on 1 April 1952.