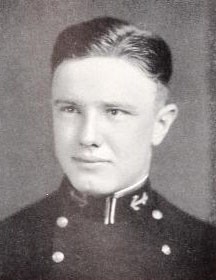 Charles Coston Coley was born on May 27, 1911, in Oklahoma City, Oklahoma son of Dr. A.J. Coley and Mrs. (Alice Coston) Coley. He attended Classesn High School, Oklahoma City University and US Hall’s Preparatory School before his appointment as a Midshipman to the US Naval Academy, Annapolis, Maryland, in 1930. He was graduated and commissioned Ensign on May 31, 1934, and through subsequent promotions attained the rank of Captain to date from July 1, 1953.

Following graduation from the Naval Academy, he was assigned first to the USS Maryland of Battleship Division 4, Battle Force. Detached in March 1936, he had six months duty aboard the USS Nitro, of Naval Transportation Service, after which he was ordered to Asiatic Station. During the period December 1936 to February 1939,  he served successively in the USS Barker of Destroyer Division 13, Asiatic Fleet, and USS Guam, on Yangtze Patrol and returned to the United States in May 1939.

From June 1939 until March 1943 he served in the USS Ranger, and that aircraft carrier participated in the Algeria-Morocco landings in November 1942, during the early period of the United States participation in World War II. Throughout the remaining period of hostilities, he was a member of the staff of Commander Service Force, Atlantic Fleet. He was awarded the Bronze Star Medal with citation, in part, as follows:

“Commander Charles C. Coley, during the period from 1943 to June 1945 displayed, as Flag Secretary to the Commander Service Force, U.S. Atlantic Fleet, exceptional devotion to duty. At a time when the Atlantic Fleet sought for and attained that expansion of its ships personnel and bases necessary to the defeat of German submarine raiders operating against supply lines, he, as Administrative Assistant to the Chief of Staff, relieved that officer and the Flag Officer Commanding of many important details and readily assumed and successfully prosecuted responsibly normally assigned an officer o much higher rank…”

In August 1945 he assumed command of the USS Fred. T Berry, continuing as Commanding Officer of that destroyer until September 1947. He then reported to the USS Cambia, flagship, for duty as Chief Staff Officer to Commander Transport Division 21. From July 1948 until October 1950 he had shore duty as Executive Officer of the Naval Reserve Officer Training Corps Unit at Cornell University. When detached, he had duty in connection with the reactivation of the USS New Jersey, and became her Executive Officer when she was recommissioned on November 21, 1950.

“For exceptionally meritorious conduct in the performance of outstanding services to the Government of the United States as Executive Officer of the USS New Jersey during operations against enemy aggressor forces in Korea from May to November 1951…” he was awarded the Legion of Merit with Combat “V,”. The citation continues: “An officer of marked skill and resourcefulness, Commander Coley succeeded in maintaining his ship at a high level of combat readiness and aided materially in the destruction of vital enemy shore installations. On one occasions when fire broke out in a gun tub during the bombardment of Wonsan Harbor, he unhesitatingly rushed to the scene and threw the burning material over board, thereby preventing possible damage to the ship and its personnel…”

Detached from the New Jersey in January 1952, he attended the Armed Force Staff College from February to July of that year, after which he reported for duty on the staff of Commander in Chief, Atlantic Fleet. While in that assignment, ending in June 1954, he has been on duty in the Office of the Chief of Naval Operations, Navy Department.