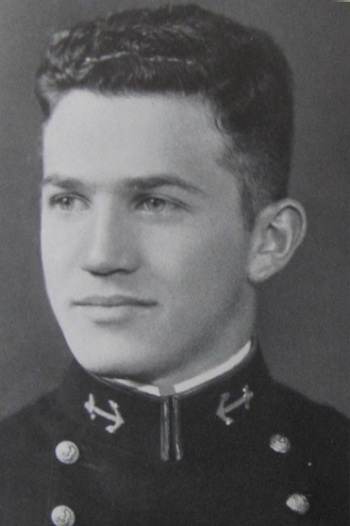 Born in Beaumont, Texas, Eli Vinock was active in high school athletics there and a leader in scouting. In 1932 he enlisted in the US Navy, and two years later entered the Naval Academy as a Midshipman from Texas. He was graduated with the Class of 1938 and for three years thereafter was at sea, first in the cruiser Northampton, later the destroyers Somers and Aaron Ward (the first of the four-stackers to be turned over to England under Lend-Lease agreement) and finally in the battleship New York.

In February 1941 he joined the battleship North Carolina, and was serving in that vessel when the United States entered World War II. Aboard North Carolina he saw action during the Guadalcanal Tulagi landings and the Eastern Solomons operation. In August 1943 he became Executive Officer of the newly-commissioned destroyer Remey, and subsequently participated in the occupation of Kwajalein and Majuro Atolls and the capture and occupation of Saipan. In August 1944 he assumed command of USS McCalla, and continued in command of that destroyer, following the cessation of hostilities, until May 1946. For outstanding service in the McCalla, he was awarded the Bronze Star Medal and a Letter of Commendation (with Ribbon), each with Combat “V.”

Between June 1946 and April 1949 he served as Operations Officer on the Staff of Commander Naval Base, Key West, Florida, after which he was Plans and Policy Officer on the Staff of Commander Naval Forces, Marianas. He served from November 1950 until June 1953 as Head of the Engineering and Damage Control Department at the General Line School, Monterey, California, and in July 1953 assumed command of the destroyer Hugh Purvis. In November 1955 he reported as Head of the Destroyer and Tender Branch, Fleet Maintenance Division, Office of the Chief of Naval Operations, Navy Department.

In November 1958 he became Chief of the US Naval Mission to Venezuela, with headquarters in Caracas. He returned to the United States in September 1962 and a month later assumed command of USS Sierra (AD-18). He commanded Destroyer Squadron EIGHT from November 1963 until September 1964. After brief duty in the Office of the Chief of Naval Operations, Navy Department, he was assigned in October to the Inter-American Defense Board, Washington, DC.

Bronze Star Medal: “For heroic service as Commanding Officer of a United States Destroyer during action against enemy Japanese forces in the Philippine-Formosa Area from October 12 to 14, 1944. Operating with a Carrier Task Group undergoing numerous enemy air attacks, (he) skillfully fought his ship and succeeded in shooting down two enemy planes…”

Letter of Commendation: “For meritorious service in connection with operations against the enemy while serving as Commanding Officer of the USS McCALLA, from September 1944 to July 1945. During September and October the McCALLA served as a screening unit with Task Force THIRTY-EIGHT in support of air strikes on enemy planes, the McCALLA shooting down two. During November and February the McCALLA performed escort and patrol duty between Kossol Roads, Ulithi and PELELIU. ON February 11, 1945, the McCALLA furnished call fire support for troops at Zamboanga. On June 14-15 she shelled Meri-Lutong, destroying gun emplacements…”