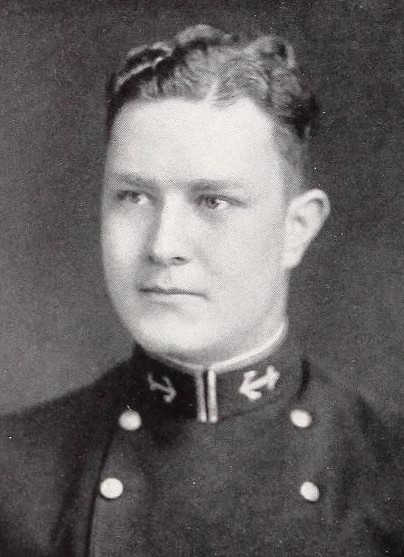 Walter Harlen Baumberger was born in McMechen, West Virginia, on January 27, 1912, son of Wesley R. and Virginia Elizabeth (Chaddock) Baumberger.  He attended Parkersburg (West Virginia) High School prior to entering the US Naval Academy, Annapolis, Maryland, on appointment from his native state in 1930.  As a Midshipman he played football and was a member of the N-Club.  Graduated and commissioned Ensign on May 31, 1934, he subsequently advanced in rank, attaining that of Vice Admiral, to date from March 17, 1967.

Following graduation from the Naval Academy in 1934, he joined the USS Pennsylvania, and while attached to that battleship coached the ship’s football team, which won the Fleet Championship in 1937.  Transferred to the USS Honey in May 1938, he remained on board that destroyer until July 1939, after which he served for several months as Assistant Football Coach at the Naval Academy.  In December 1939 he reported as Assistant Gunnery Officer on board the USS New York, was attached to that battleship when the United States entered World War II, December 8, 1941, and subsequently participated in the Algeria Morocooco landings.

Returning to the Naval Academy in June 1943, he served as an instructor in Ordnance and Gunnery and also was Officer Representative for Football in 1944.  In April 1945 he assumed command of the USS English.  Under his command, that destroyer rescued personnel, including Admiral Marc A. Mtscher, USN, and his Staff from the burning carrier USS Bunker Hill, 1945.  For outstanding services while in command of the English he was awarded the Bronze Star Medal, with Combat “V,” and the Navy and Marine Corps Medal.  The citations follow, in part:

Bronze Star Medal: “For meritorious service as Commanding Officer of the USS English in operations against enemy Japanese forces in the Pacific Area from April 30 to September 2, 1945…Displaying outstanding skill in evading and driving off numerous enemy air attacks and successfully carrying out those hazardous assignments without damage to his ship, he materially contributed to many successful bombardment missions and the possible sinking of an enemy submarine…”

Navy and Marine Corps Medal: “For heroic conduct…during a major air battle against enemy Japanese forces in the waters off Okinawa, Ryukyu Islands, May 11, 1945.  When one of our fast carriers was attacked by Japanese suicide planes and badly damaged, Commander Baumberger unhesitatingly brought his ship alongside the stricken vessel and, working tirelessly to control the raging fires, was instrumental in saving many trapped and wounded personnel…”

Detached from command of the English in May 1946, he briefly commanded the USS Gainard and in September of that year joined the USS Missouri to serve as First Lieutenant, Navigator and Operations Officer.  Between September 1948 and June 1951 he was again an instructor in Ordnance and Gunnery at the Naval Academy, with additional duty as Officer Representative for Track, Secretary to the Board of Visitors and a member of the Executive Committee of the Naval Academy Athletic Association.

He was Commanding Officer of the USS Canberra from January to November 1960, after which he served as Chief of Staff and Aide to Commander Cruiser-Destroyer Force, Pacific.  In February 1962 he became Commander Cruiser-Destroyer Flotilla Three, and served as such until May 1963, when he reported as Director of the Ships Material Readiness Division, Office of the Chief of Naval Operations, Navy Department.  “For exceptionally meritorious service from May 1963 to May 1965…” in the latter assignment, he was awarded the Legion of Merit.  The citation continues in part:

On May 28, 1965 he reported as Commander Cruiser-Destroyer Force, Pacific Fleet and for “exceptionally meritorious service from May 1965 to March 1967…” in that capacity, he was awarded a Gold Star in lieu of the Second Legion of Merit.  The citation further states in part: “Responsible for maintaining the Cruiser-Destroyer Force at a high level of readiness while the number of ships deployed to the waters of Southeast Asia was increased, Rear Admiral Baumberger immediately and effectively met the challenge, skillfully utilizing his knowledge and understanding of cruiser-destroyer operations, his background in maintenance and material management, and his dynamic leadership…”

In September 1970 he reported as Commander of the United States Taiwan Defense Command and served as such until September 1972.  He was awarded a Gold Star in lieu of the Third Legion of Merit and cited in part as follows: “…Through his vast professional knowledge and capabilities, along with his perceptive judgment, keen foresight and fine sense of diplomacy, (he) has contributed essentially to the continuation of the historically warm and cooperative relationships existing between the Governments of the Republic of China and the United States…”

Ordered to Headquarters, Eleventh Naval District, San Diego, California, he remained there until relieved of all active duty pending his retirement, effective January 1, 1973.