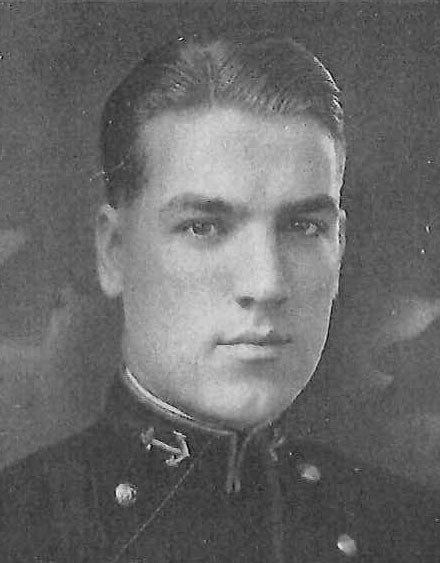 Captain Cease was born on October 17, 1903, at Harbor Springs, Michigan, the son of Mrs. Edith Margaret (Moore) Cease and the late Mr. Willard Lewis Cease. He attended Canton High School, Canton, Pennsylvania, before his appointment to the US Naval Academy at Annapolis, Maryland, from Pennsylvania in 1922. While a Midshipman he participated in baseball, gymnastics, and wrestling. Graduated and commissioned Assistant Paymaster, with the rank of Ensign, in the Supply Corps of the US Navy, on June 3, 1926, he advanced progressively to the grade of Pay Director, with the accompanying rank of Captain to date from October 10, 1944.

Following graduation from the Academy in 1926, Captain Cease served as Assistant Supply Officer of USS Pennsylvania for a year. In August 1928 he reported in the same capacity at the Navy Yard., Puget Sound, Washington, and remained there until September 1930. For two months thereafter he was assigned to the Navy Yard, Sixteenth Naval District, Cavite, Philippine Islands.

Reporting for sea duty as Assistant for Disbursing aboard USS Black Hawk, he was attached to that vessel when she was present at Shanghai, China, during the Japanese occupation of that city in 1932. Completing a month’s assignment at the Naval Supply Depot, New York, New York, during February and March 1933, he transferred to the Navy Yard, New York, New York. Between September 1933 and June 1935, he attained a special course in textile engineering at the Philadelphia Textile School, Philadelphia, Pennsylvania, and thereafter had duty at the Navy Clothing Depot, New York, New York. He served as Disbursing Officer aboard USS Phelps, during November and December 1936, and accompanied the late President Franklin D. Roosevelt on a cruise to South American in 1936.

In January 1937, Captain Cease reported aboard the carrier Lexington, as Assistant for Disbursing with additional duty as Assistant to the Supply Officer. He was detached from the Lexington in July 1939 for duty as Supply Officer attached to Pearl Wing Five. Continuing in that assignment until August 1940, he reported the following month as Supply Officer aboard USS New Orleans.  While in that capacity he participated in the battles of Pearl Harbor, landing on Guadalcanal, Battle of Midway and the Battle of the Eastern Solomons. Relieved of supply duty aboard the New Orleans in October 1942, he assumed duty as Assistant to the Aviation Supply Officer at the Navy Yard, Philadelphia, Pennsylvania.

Returning to the United States, Captain Cease had duty as Supply Officer in the Progress Section of the Office of the Chief of Naval Operations, Navy Department, Washington, DC , from February 1943 to April 1944. Thereafter he had instruction at the Army-Navy Staff College, Washington, DC Upon completing the course there in November 1944, he was assigned in December of that year to the staff of Commander, Service Squadron Eight, Service Force, Pacific. For meritorious service in that assignment, from December 1944 to September 1945, he received a Letter of Commendation, with authorization to wear the Commendation Ribbon, from the Commander in Chief, US Pacific.

From September 1945 to July 1946, Captain Cease served as Logistics and Supply Officer on the staff of Commander, Philippine Sea Frontier, and Naval Force, Philippines. Relieved of staff duty in July 1946, he reported the following month as Supply Officer at the San Francisco Naval Shipyard, San Francisco, California. In April 1948, he reported for duty in the Bureau of Supplies and Accounts, Navy Department, Washington, DC, and remained there until ordered, on May 9, 1949, to duty as District Supply Officer, Tenth Naval District, San Juan, Puerto Rico.