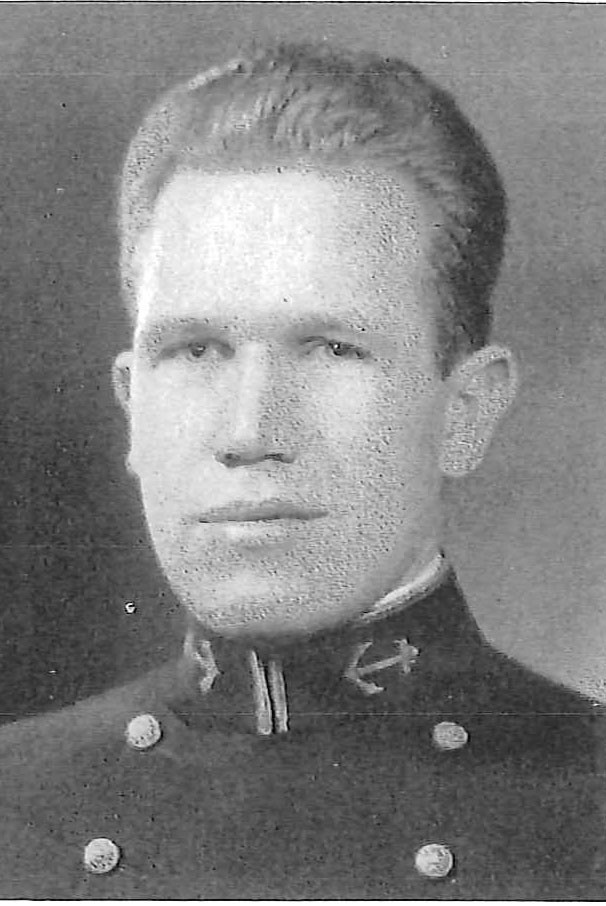 Jay Valentine Chase was born in Chevy Chase, Maryland, on November 1, 1910, son of the late Rear Admiral J. V. Chase, USN, and Mrs. (Mary Taylor) Chase. After attending Schadman’s Prep School, in Washington, DC, he entered the United States Naval Academy, Annapolis, Maryland, in 1929 by Presidential appointment at large. Graduated and commissioned Ensign in June 1, 1933, he subsequently advanced in rank of Captain (for temporary service) to date from July 1, 1951.

Upon his graduation and detachment from the Naval Academy, he was ordered to USS Tennessee, and served in that battleship two years. On June 17, 1935, upon commissioning of USS Dale at the Navy Yard, New York, New York, he went aboard that destroyer as Assistant Engineer Officer, and in November, 1936 transferred to USS Zane as Engineer Officer. When detached from that duty in June, 1939, he returned to Annapolis to attend the Naval Postgraduate School course in Naval Engineering, and after two years he continued under its supervision at the Naval Boiler and Turbine Laboratory, Philadelphia, Pennsylvania; Massachusetts Institute of Technology in Cambridge; and the General Electric Company in Schentady, New York.

Upon completion of the course in June, 1942 he joined USS San Francisco in the Pacific War Area, and served the remainder of that year. He received the ribbon for and facsimile of the Presidential Unit Citation awarded that cruiser, “For outstanding performance in action against enemy Japanese forces of Savo Island in the Solomon Islands on the night of October 11-12, and again in the early morning of November 13, 1942.” The citation states further: “In the latter engagement, the San Francisco silenced and disabled an enemy battleship at a range of 3,000 yards, sank one enemy destroyer and damaged two others. Although heavily damaged by fifteen major caliber hits, she lived to fight again, her survival a distinct tribute to the valorous spirit of her officers and men.”

In January, 1943 he reported in the Bethlehem Shipbuilding Company, San Francisco, California, where USS Oakland was fitting out. When that cruiser was commissioned, July 17, 1943, he had duty aboard as Engineer Officer, serving in the Pacific until detached in November, 1944. He was awarded the Bronze Star Medal with combat distinguishing device, V, “For meritorious achievement… in forward Pacific Area, from November 15, 1943 to July 20, 1944. Working tirelessly to maintain his engineering personnel at the highest peak of efficiency, (he) rendered invaluable service to his ship and crew and, remaining cool and resolute under hostile fire, contributed immeasurably to the success of his ship in combat…”

Returning to the United States , in February, 1945 he reported to the New York Shipbuilding Company, Camden, New Jersey, for fitting out USS Fall River, heavy cruiser, and from her commissioning, July 1, 1945, until March, 1946 he served aboard as Engineer Officer. Transferring to the cruiser Vicksburg, he was Navigator, and later also Executive Officer from March to December, 1946. From January, 1947 he commanded USS Moale (DD 693), and when relived of that command reported, in March, 1948, in the Navy Department, Washington, DC, Office of the Chief of Naval Operations, for an assignment to duty in the Material Control Division. Upon being detached in November, 1951 he assumed command of USS Tolovana, oiler, where he is currently serving.