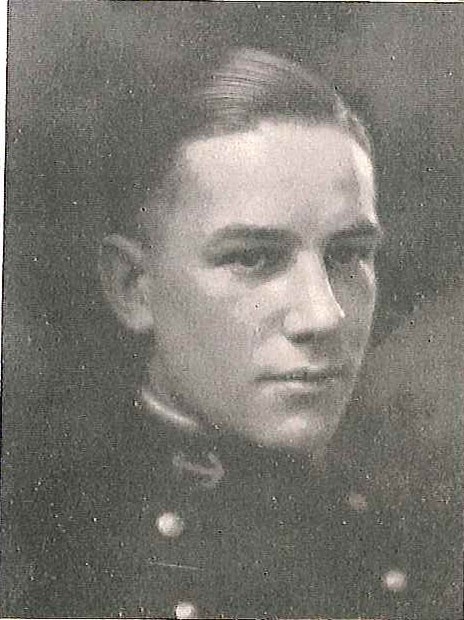 Russell John Bellerby was born July 8, 1902 in Dawson, Yukon Territory, Canada. He completed high school at Fairbanks, Alaska, permanent home of his parents in 1920 and became the first appointee to the US Naval Academy from Central Alaska when designated Midshipman that year by Delegate to Congress Sulger from that Territory. Graduated and commissioned Ensign in June 1924, he was periodically advanced in grade until he attained the rank of Captain in November 1944, to date from July 10, 1943.

Following graduation he served from August 1924 to May 1925 aboard USS Pennsylvania and from June to October 1925 in USS Pecos of Asiatic Fleet. Transferred to USS Elcano on Yangtze Patrol, he continued Asiatic duty until December 1927 when he went aboard USS General Alava for transportation to the United States where in June 1928 he reported for duty in USS Texas, flagship of the US Fleet.

After three years aboard the Texas as Deck Division Officer, he was detached as ordered to Headquarters, Twelfth Naval District, San Francisco, where he was on duty from June 1931 to May 1933, before going to sea again in USS Langley, a unit of Carrier Division Two, Battle Force. In April 1935, he was transferred to the Battleship Idaho, Battleship Division Three, Battle Force, and served as Turret Officer until June 1936 in Pacific waters.

He served as Recruiting Officer, US Naval Recruiting Station Denver, Colorado, from July 1936 through 1938. He next was assigned duty as Communications Officer in USS Minneapolis, flagship Cruiser Division 6 of Scouting Forces and the Hawaiian Detachment, until late 1940, when he became Executive Officer of the Zeilin, attack transport. He remained in that duty after World War II began in the Pacific and until his vessel was struck by enemy bombs November 11, 1942 at Guadalcanal.

“For exceptionally meritorious conduct….as a member of the Staff of a Transport Group Commander in the Zeilin during amphibious operations in the South, North, and Central Pacific areas during World War II….” he was awarded the Legion of Merit Medal with combat “V”. On November 11, 1942, his ship was struck by a bomb from a Japanese plane, and was successfully returned to the Untied States and repaired for further service. The USS Zeilin also received the Navy Unit Commendation and he is entitled to the ribbon for and a facsimile of that citation.

From 1942 through 1944, he served on the staff of various Transport commands, participating in the landings at Attu, Aleutian Islands, and later at Kwajalein, Pelelieu, Guam, and Samar in the Central Pacific. “For meritorious achievement as a member of the Staff of Commander, Transport Division 24 during operations against enemy Japanese forces at Palau from September 15 to 27, 1944, and during the assault on Leyte Island, Philippine Islands, October 20, 1944,” he was awarded the Bronze Star Medal with Combat “V.”

He returned to the United States in early 1945, and was on duty that year as Fleet Support Officer, Los Angeles Naval Base, Los Angeles, California. The following year he assumed command of the USS Pitt, Amphibious Force, Pacific Fleet to participate with the Sixth Army in the first post-war amphibious training in the Pacific. Early in 1947, he became Commanding Officer of the Tsingtao Unit, Joint US Military Advisory Group to the Republic of China. That unit was engaged in training of Chinese to man excess US Naval vessels turned over to China and as advisors to the Chinese Naval Academy of 500 cadets. From December 1948 to March 1949, he was Chief of Staff to Commander, Amphibious Group 3, charged with the assistance of US Nationals in the Yangtze River Valley.

Upon returning to the United States, he reported in May 1949 as Inspector of Navy Recruiting, Fourth Recruiting Area comprising Ohio, Indiana, Kentucky, Missouri and southern Illinois (with headquarters in Columbus, Ohio). In September 1949, he was transferred to similar duty in the Eighth Recruiting Area (Washington, Oregon, California, Idaho, Nevada, Utah Arizona, and western Wyoming,) with Headquarters in Douglas, Utah. That is his present assignment.

In addition to the Legion of Merit with “V”, Bronze Star Medal with “V” and the Ribbon for the Navy Unit Commendation, Captain Bellerby is entitled to the Yangtze Service Medal (1927); American Defense Service Medal; Asiatic-Pacific Campaign Medal with seven stars; Philippine Liberation Ribbon; American Campaign Medal; and the China Service Medal. He also has the Special Brest Order of Cloud and Banner, awarded by the Republic of China.