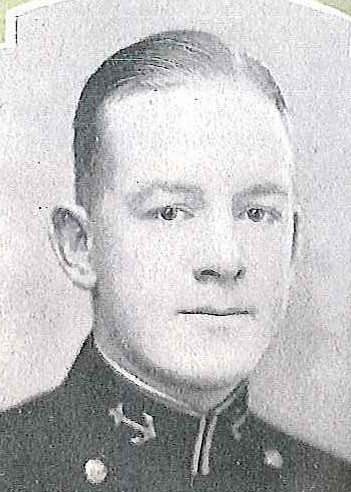 Henry Jacques Armstrong was born in Salt Lake City, Utah, on June 14, 1903, son of the late Henry J. and Elizabeth (Green) Armstrong.  He was graduated from East Side High School in Salt Lake City and attended the University of Utah for a year before entering the US Naval Academy, Annapolis, Maryland, on June 3, 1923.  As a Midshipman, he played Class and Company football, belonged to the Dramatic and Musical Clubs, and was a member of the Stage Gang.  Graduated and commissioned Ensign on June 3, 1927, he subsequently attained the rank of Captain, to date from March 10, 1945.

After graduation from the Naval Academy in 1927, he had sea duty until 1929, serving successively as watch and junior division officer in the USS Medusa, the USS Colorado, and as Assistant Engineer Officer of USS Henshaw.  He had brief flight training at the Naval Air Station, North Island, San Diego, California, in 1929 and 1930 and for 5 years thereafter, again at sea, first as Engineer and Watch Officer of the USS Pruitt, later as Ship’s Secretary and Direction Operator in USS Saratoga.

He was a student in General Line at the Postgraduate School, Annapolis, Maryland, in 1935-1936, and the next year, after completing the Hydrographic Course, reported as Executive Officer and Navigator of the USS Fairfax of Special Service Squadron.  At sea during the period 1938-1939, he served in USS Nokomis, on survey duty, as Officer in Charge, US Navy Houseboat #1, Ocean and Lakes Officer; and in USS Oklahoma, a unit of Battleship Division 2, Battle Force.  Upon his return to the United States, he was assigned duty as an instructor in the Naval Reserve Officers Training Corps Unit of the University of California at Berkeley.

After attending Sound School at San Diego, California, he assumed command, in July 1941, of USS Waters, and took that destroyer from Honolulu to the Aleutian Islands late in 1941.  He was in command of the Waters in the vicinity of Dutch Harbor, Alaska, when the United States entered World War II.  During the period 1942-1944, he commanded USS Spence (DD 512), participating in the Casablanca Convoy and operations in the Southwest Pacific as a part of Destroyer Squadron 23, “Little Beavers” including the bombardment of Kavieng, the Battle of Empress Augusta Bay, and others.  He is entitled to the Ribbon for, and a facsimile of, the presidential Unit Citation to Destroyer Squadron 23:

“For extraordinary heroism in action against enemy Japanese forces during the Solomon Islands Campaign, from November 1, 1943, to February 23, 1944…”  The citation is concluded with:  “The brilliant and heroic record achieved by Destroyer Squadron TWENTY-THREE is a distinct tribute to the valiant fighting spirit of the individual units in this indomitable combat group and of each skilled and courageous ships’ company.”

He was personally awarded the Navy Cross, a Gold Star in lieu of the Second Navy Cross, and Bronze Star Medal with Combat “V”, for service during the period of his command.  The citations follow in part:

Navy Cross:  “For extraordinary heroism…during a night engagement with sex enemy Japanese warships off Bougainville, British Solomon Islands, on November 24-25, 1943… (He) fought his ship with resolute courage and daring aggressiveness, frequently risking his own personal safety to press home vigorous, unrelenting attacks upon Japanese surface forces… to contribute materially to the crushing defeat imposed upon the enemy in the sinking of four ships and the serious damaging of two others…”

Gold Star in lieu of the Second Navy Cross:  “…on the night of November 1-2, 1943.  With his Task Force engaging a Japanese surface force of superior fire power, (he) hured the full fighting a strength of his ship against the enemy and…aided his Task Force in sinking five hostile warships, in damaging four others and in completely routing the enemy, thereby contributing materially to the successful establishment of our beachhead on Bougainville Island…”

Bronze Star Medal, “V”:  “For heroic achievement as Commanding Officer of the USS Spence, a unit of Destroyer Squadron TWENTY-THREE, in action against enemy Japanese forces Northwest of the Bismarck Archipelago, at Kavieng, New Ireland, and on the Duke of York Island, February 17 to 23,  1944…He directed the Spence in destroying two Japanese auxiliary vessels, one large cargo ship, a ine layer and four barges, and in inflicting heavy damage on important shore installations subsequently bringing his destroyer through these hazardous engagements without damage…”

Returning to the United States, he was ordered to USS Adams (DM 27) building at the Bath Iron Works, Bath, Maine.  He assumed command of that minesweeper at her commissioning in October 1944, and early in 1945 participated in action at Kerama Rhetto and Okinawa.  The Adams was truck twice and seriously damaged by suicide planes and returned to San Francisco steering by engines.  He was awarded the Silver Star Medal and a Gold Star in lieu of a Second Bronze Star Medal with Combat “V”, with the following citations:

Silver Star Medal:  “For conspicuous gallantry and intrepidity as Commanding Officer of the USS Adams in action against enemy Japanese forces at Okinawa Gunto from March 23 to April 1, 1945…When hostile aircraft launched repeaed air attacks against his ship as well as against vessels being supported, he ably directed his crew in destroying several of the enemy planes and in repelling others, thereby preventing much probably damage to these ships…”

Gold Star in lieu of Second Bronze Star Medal, “V”:  “For heroic achievement…in the Pacific War Area from April 7 to May, 1945.  Although seriously handicapped by the loss of his ship’s rudder through enemy action a Okinawa, Captain Armstrong Skillfully handled the Adams on her return trip to the West Coast of the United States, keeping his ship on station in areas whee attack by enemy submarines was imminent and affording protection to damaged heavy units in company…”

He is also entitled to the Ribbon for and facsimile of the Navy Unit Commendation awarded the USS Adams for “outstanding heroism in action while serving as Flagship of Mine Division EIGHT during operations for the seizure of enemy Japanese-held Okinawa, Ryujyu Islands, from March 24 to April 1, 1945…”

He detached from the Adams and given command of Mine Division EIGHT, and later was Task Unit Commander of a “Guinea Pig Group” for ocean sweeps in the China Sea and to test channels before entrance of our forces into Japan channels.  A Legion of Merit, with Combat “V”, was awarded him “For exceptionally meritorious conduct…as Commander of a Division of Fleet Mine Sweepers, and later as Commander of Task Group engaged in ‘Guinea Pig’ operations from May 7, 1945 to December 23, 1947.  During that period he displayed outstanding courage and leadership in the sweeping and buoying of enemy mine fields in the East China Sea and Japanese waters…”

His next assignment, after his return to the United States, was a tour of duty in the Office of the Chief of Naval Operations, Navy Department, Washington, DC.  He then reported to Commander Cruisers-Destroyers, Pacific, for four months’ duty, after which from February 1951 to February 1952 he served as Commander Destroyer Squadron 15.  During this period he served as Screen Commander of fast carrier operations off Korea during three difference periods, and successively as “Mayor of Won” and Governor of Wonson, conducting extensive shore bombardments and patrol activities.

As a result of these operations, he was awarded a Gold Star in lieu of the Second Legion of Merit with Combat “V”.  The citation follows in part:

“For exceptionally meritorious conduct…as Commanding Officer of Destroyer Squadron FIFTEEN during operations against enemy aggressor forces in Korea from May 9 to December 7, 1951…Captain Armstrong was highly successful in directing the operations of the Destroyer Squadron during this period and maintain a high standard of combat efficiency within the group throughout repeated  interdiction and bombardment strikes along the coast of Korea.  Exercising a thorough understanding of the naval mission in the Korean conflict, he greatly aided in formulating plans for combat activities, maintained close liaison with other units and higher ochelons and rendered invaluable service in matters concerning naval operations. By his outstanding professional skill, sound judgment and zealous devotion to duty, (he) contributed materially to the success of vital operations against the enemy…”

In March 1952, he joined the staff of Commander Caribbean Sea Frontier to serve as Director of Intelligence.  On October 26, 1953, he was ordered to duty as commanding Officer of USS Worcester (CL 144), and continued in command of that cruiser until detached on orders of April 7, 1955), to duty as Chief of Staff to the Commandant, Ninth naval District, Great Lakes, Illinois.