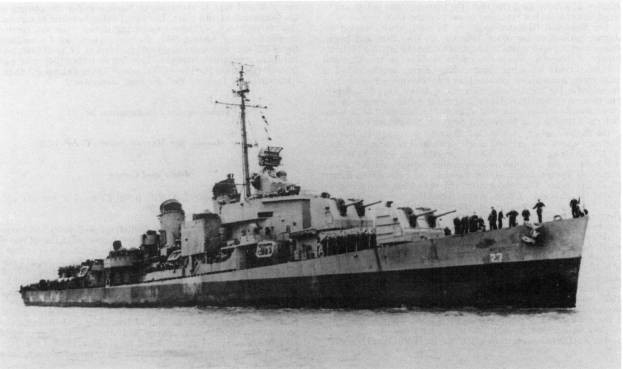 The first and second ships named Adams honored John Adams, the second President of the United States and an ardent champion of the Navy. See John Adams (q.v.) for biography.

Yorktown, to which VB-5 was attached, operated with the Pacific Fleet until the spring of 1941, when she was transferred to the Atlantic. Early in that period, VB-5 operated from Ranger (CV-4) as VB-5 and otherYorktown squadrons exchanged with units from that carrier, carried out neutrality patrols in the North Atlantic. Adams remained with the squadron through its transition at Norfolk from the Northrop BT-1 to the Douglas SBD Dauntless, and flew patrols from Yorktown when that carrier covered convoys in the North Atlantic in the fall of 1941.

Soon after Pearl Harbor, Yorktown returned to the Pacific, and took part in the raids on Japanese advanced bases in the Marshalls and Gilberts. Adams, by that point one of the more senior pilots in the group, led a section of SBDs from VB-5 in raids on Japanese shipping and installations at Jaluit on 1 February 1942. A little over a month later, he again led a section, in the combined Yorktown-Lexington (CV-2) air group strike on Japanese shipping off Lae and Salamaua, New Guinea, on 10 March 1942. He also led sections in the raids on Tulagi (4 May 1942) and in the Battle of the Coral Sea (7 and 8 May 1942). For his performance in those engagements in the first six months of the war, he received two Navy Crosses.

Although VB-5 had performed arduous duty in the early wartime period, the circumstances prevailing shortly before the Battle of Midway meant that there would be no rest for it. Temporarily redesignated as "Scouting" Squadron 5, VB-5 returned to the fray in Yorktown, which had been rendered seaworthy after being damaged in the Coral Sea.

During the action at Midway on 4 June 1942, dive bombers from Yorktown and Enterprise mortally damaged three of the Japanese striking force's four carriers. Adams and his wingman, Lt. Harlan R. Dickson, were among the VB-5 pilots assigned a search sector in the effort to locate Hiryu, the one carrier left undamaged.

They found their quarry, and although Adams and Dickson were attacked by a Mitsubishi A6M2 Type 00 carrier fighter [Zero] fighter, Adams radioed a precise contact report that enabled a strike group from Enterprise (CV-6) -- whose complement included planes from Yorktown's orphaned VB-3 -- to locate Hiryu and score hits that knocked her out of the battle and led to her ultimate abandonment.

The next afternoon [5 June 1942], while flying a search mission from Enterprise, Adams spotted the Japanese destroyer Tanikaze. As he began his dive, he urged his wingmen to take their time in order to make accurate attacks. His SBD dove into the cloud cover, and was never seen again. Adams and his radio-gunner, Aviation Radioman 1st Class Joseph J. Karrol, fell to the destroyer's antiaircraft fire.

For his significant role in the Battle of Midway, Adams was posthumously awarded a third Navy Cross.

After fitting out there, she embarked upon her shakedown voyage on 1 November 1944. That cruise, which took her to Bermuda waters, lasted for the entire month. On the 29th, she headed back toward the United States and arrived at Norfolk, Va., on 3 December. Following post-shakedown availability in the navy yard there, she put to sea on 11 December with sistership Shea (DM-30), bound for New York and a rendezvous with Bennington (CV-20). The two destroyer minelayers departed New York with the aircraft carrier on 15 December and set a course for the Panama Canal. The three warships transited the canal on 20 December and, on the 22nd, headed for the California coast. They arrived at San Diego on the 29th and remained there two days undergoing repairs. On New Year's Day 1945, they got underway again, headed for Oahu, and they arrived in Pearl Harbor six days later.

For almost two months, Adams remained in the Hawaiian operating area. During that time, she acted as plane guard for Bataan (CVL-29) while the small carrier conducted landing qualifications for naval aviators. She also carried out gunnery exercises and shore bombardment practice. The warship spent two periods in the Pearl Harbor Navy Yard, once for the installation of VF radar equipment and again to have her main deck plating strengthened. Early in February, she laid mines and tested mine detection equipment on them. Later, the warship conducted mine laying exercises. She finished out her tour of duty in the Hawaii area late in February with another plane guard mission with Bataan.

The light minelayer stood out of Pearl Harbor on 2 March 1945, bound for the western Pacific. She arrived in Ulithi Atoll on 14 March and remained until the 19th, when she put to sea with a task group of the Okinawa invasion force. The warship saw her first combat on 23 March, the day before she arrived off Okinawa. That evening, enemy aircraft attacked her task group. Adams sustained her first casualties when a projectile fired from the after five-inch mount exploded prematurely killing two sailors and injuring another 13. At dawn the following day, she began minesweeping operations off Okinawa. The light minelayer provided gunfire support and mine destruction services to the wooden-hulled minesweepers doing the actual sweeping.

Those operations continued over the next few days in spite of Japanese air resistance. During that time, she was attacked by at least twelve different planes. She knocked six of her tormentors out of the air and claimed probable kills of two others. On the 28th, one of those attackers splashed about 25 feet from her port bow showering her with debris and gasoline. The damage she sustained in a collision with a salvage vessel forced her into the anchorage at Kerama Retto for emergency repairs. On 1 April, while she was operating to the southeast of Kerama Retto, a badly damaged Japanese plane splashed close aboard her stern; and what must have been two bombs exploded under her fantail causing severe damage and jamming her rudders at hard right. While she steamed in righthand circles, two more suicide planes swooped in at her. Adams destroyed one while the other succumbed to the antiaircraft battery of Mullany (DD-528), the ship dispatched to assist Adams. Later, Adams was towed into Kerama Retto to begin temporary repairs alongside the landing craft repair ship Endymion (ARL-9).

Adams departed Kerama Retto on 7 April 1945, bound, ultimately, for the United States and permanent repairs. She made stops at Guam and at Pearl Harbor before arriving at the Mare Island Navy Yard, Vall;ejo, Calif., on 7 May. She completed repairs and post-repair trials and calibrations during the first week in July. On 6 July, she put to sea for exercises off Santa Catalina and entered port at San Diego on the 10th. After brief post-repair shakedown training and inspections, the destroyer minelayer stood out of San Diego on 17 July on her way back to Hawaii. She arrived at Oahu on the 23rd and spent the next 11 days in gunnery exercises--both antiaircraft and shore bombardment--in the Hawaiian operating area.

On 4 August 1945, Adams and the escort vesselKoiner (DE-331) departed Pearl Harbor, bound for the western Pacific. The two warships stopped overnight on the 11th and 12th at Eniwetok Atoll where they picked up the attack transport Sitka (APA-113). They escorted her to the Marianas and arrived at Guam on 15 August, the day hostilities ceased. The following day, she got underway for Okinawa, arrived in Buckner Bay on 18 August, and remained there through the 31st. On 1 September, she stood out of Buckner Bay on her way to Japan. She arrived off Kagoshima, Kyushu, on the 3rd and began sweeping a channel into the port. That operation continued until 9 September at which time she headed back toward Okinawa. She reached Buckner Bay on 11 September and remained at anchor until the 16th. On that day, she put to sea to evade a typhoon but returned to port on the 18th.

Adams departed Okinawa again on 24 September 1945; headed for Japan; arrived in Ise Wan, Honshu, on the 26th; and began minesweeping operations in preparation for the landing of Army troops at Nagoya. She anchored in Ise Wan on the 28th and remained there while her commanding officer, double-hatted as task group commander, directed the minesweeping mission. She remained at Ise Wan through the end of October. On 1 November, the destroyer minelayer laid a course for Sasebo where she arrived two days later. She stayed there through most of November provisioning ship from units preparing to return home.

On 25 November 1945, Adams left Sasebo to voyage to Kiirun, Taiwan, where she arrived on the 28th and reported for duty with Task Group (TG) 70.5. She returned to sea with TG 70.5 on 4 December for a 10-day minesweeping assignment in Taiwan Strait. At the conclusion of that mission, she returned to Kiirun on 15 December. Four days later, she put to sea with a convoy bound for Shanghai, China, and entered the Yangtze River on the 21st. Adams remained at Shanghai until 3 January 1946. Between 3 and 6 January, the warship voyaged back to Sasebo where she rejoined the Fifth Fleet.

Adams continued similar duty in Far Eastern waters until early April 1946 when she headed back to the United States. Upon her arrival home, she was assigned to the First Fleet and served in it until decommissioned in December. The light minelayer was berthed with the San Diego Group, Pacific Reserve Fleet, and remained in reserve for almost 23 years. On 7 February 1955, while still in reserve, she was redesignated a fast minelayer MMD-27.