Thomas Andrew Ahroon was born in Baltimore, Maryland, on 3 May 1907, son of Dr. Carl R. Ahroon and Mrs. (Jennie L. Alstrom) Ahroon. He attended Roland Park Grade School and Baltimore Polytechnic Institute and entered the US Naval Academy, Annapolis, Maryland, on appointment of Senator Bruce of Maryland in July 1924. As Midshipman he was continuously engaged in soccer, water polo, and intramural lacrosse. He was graduated and commissioned Ensign on 6 June 1928, and through subsequent advancement attained the rank of Captain to date from 25 March 1945. His selection for the rank of Rear Admiral was approved by the President on 17 July 1956, his date of rank, 1 August 1956.

After graduation in June 1928 he remained at the Naval Academy for the summer course in aviation, and in September of that year joined USS Arkansas. In that battleship he served in various capacities as a junior officer (Assistant Navigator, Division Officer, Turret Officer, and others), until March 1930. He then reported to the Naval Air Station, Pensacola, Florida, for flight training and was designated Naval Aviator on 12 December 1930. Thereafter, until June 1934, he served as an aviator in the Observation Squadron attached to the battleship USS Pennsylvania.

Assigned from July 1934 until June 1937 as a Flight Test Pilot and Communication Officer at the Naval Air Station, Anacostia, DC, he next had duty with Fighting Squadron 5 of USS Yorktown (CV 5) serving as a pilot, Engineering Officer and Operations Officer of that squadron until August 1940. Upon detachment he reported to the Naval Air Station, Norfolk, Virginia, where he was on duty as Assistant Operations Officer, Communication Officer and Photographic Officer when the United States entered World War II in December 1941. In February-March 1942 he assisted in the conversion of USS Charger, escort carrier, which he joined at her commissioning in March. He was her Air Officer from November 1942 until May 1943 and Executive Officer for five months thereafter.

He reported in October 1943 to the Naval Station, Astoria, Oregon, for duty in connection with fitting out USS White Plains, another escort carrier, then served from her commissioning, 15 November 1943 until July 1944 in the Pacific area as her Executive Officer. Immediately after the surrender of Saipan he was transferred at sea to USS Lexington (CV 16), in which he served as Air Officer and Executive Officer until the end of hostilities. He was awarded the Legion of Merit with Combat "V,", and the Bronze Star Medal also with "V". The citations follow in part:

Legion of Merit: "For exceptionally meritorious conduct in the performance of outstanding services to the Government of the United States as Air Officer attached to the USS LEXINGTON, during operations against enemy Japanese forces in the Western Pacific from July through October 1944. A skilled and aggressive leader, Lt. Cdr. Ahroon supervised movements of the air group under his command, by his exceptional professional ability and untiring efforts, succeeded in maintaining it at the peak of operational efficiency during numerous fierce actions against enemy forces. While his ship was under a relentless attack by hostile aircraft on October 24, he skillfully directed the launching, landing and rearming of attached friendly planes and thereby contributed in large measure to the extensive and costly damage inflicted on the Japanese in this engagement..."

Bronze Star Medal: "For meritorious achievement while serving successively as Air Officer and Executive Officer on board the USS LEXINGTON during operations against enemy Japanese forces in the Southwestern, Central, and Western Pacific War Areas from November 1, 1944 to September 2, 1945. After the Executive Officer was incapacitated when a suicide plane struck his ship, Comdr. Ahroon efficiently carried out both the duties of Air Officer and Executive Officer, contributing materially to the successful control of damage to the ship. He was largely instrumental in placing the ship in condition to resume offensive action against the enemy in the short space of three hours. As Executive Officer during the many offensive and defensive combat operations carried out between November 1944, and the surrender of Japan, he skillfully maintained cognizance in a high state of combat readiness with the with the result that heavy damage was inflicted on the enemy..." 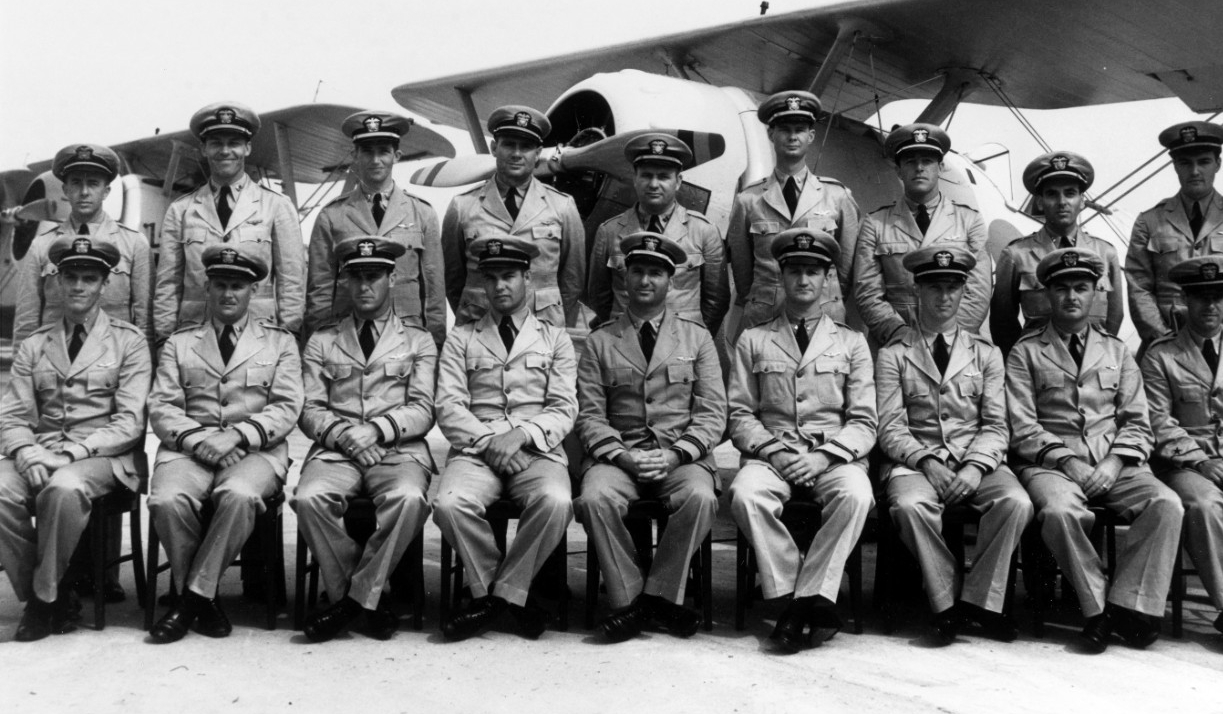 He was also entitled to the Ribbon and two stars for, and facsimilies of the Presidential Unit Citations to USS White Plains and USS Lexington.

After leaving the Lexington in Tokyo Bay, he flew back to the United States for a tour of shore duty as Aircraft Armament Officer at the Naval Gun Factory, Washington, DC. In May 1948 he assumed command of USS Norton Sound, auxiliary seaplane tender. Under his command that 14,000 ton aircraft tender operated as the first (experimental) Guided Missile Vessel to prosecute the advancement of that weapon. Detached in July 1949, he was a student at the Industrial College of the Armed Forces, Washington, DC, for a year, and during the two years to follow served at the Armed Forces Special Weapons Project Headquarters, in the Weapons Development Division.

In July of 1956 a reorganization of the Research and Development Group of the Bureau of Aeronautics to which he had contributed materially, resulted in his supervising the development of aircraft power plants, armament, airborne equipment and electronics. He was detached on short notice in November 1956 to assume command in less than a week of Carrier Division Seventeen. On 17 December, while at sea in command of a task group he was promoted to Rear Admiral and broke his flag. He was deployed as commander of a Hunter Killer Task Group to the Far East as part of the US SEVENTH Fleet for eight months, and deployed in the same capacity again in January 1958. On 6 February 1958, he reported as Assistant Chief of the Bureau of Ordnance for Plans and in October 1959 was designated Deputy and Assistant Chief of that Bureau. In March 1960 he was assigned as Assistant to the Deputy Chief of Staff for Plans and Operations on the Staff of the Commander in Chief Northern Air Defense/Commander in Chief, Continental Air Defense and later that month was ordered to duty as Commander Naval Forces, Continental Air Defense Command, with headquarters at Ent Air Force Base, Colorado.