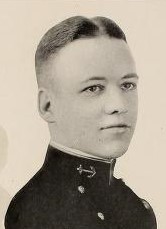 Rear Admiral Challenger was born on January 30, 1898, at Bridgeport, Connecticut, son of Howard Stanley Challenger and Mrs. (Julia Coughlin) Challenger. He was graduated from Bridgeport High School before entering the US Naval Academy, Annapolis, Maryland, from his native state in 1914. Graduated and commissioned Ensign on June 6, 1918, he subsequently attained the rank of Captain to date from June 20, 1942. He was transferred to the Retired List of the Navy on January 1, 1947, and having been especially commended by the Head of the Executive Department for performance of duty in actual with the enemy, was promoted to the rank of Rear Admiral.

Following his graduation from the Naval Academy in June 1918, Rear Admiral Challenger had World War I service aboard the battleship New Jersey for a month, and throughout the remaining months of the war in the destroyer Davis, operating of Queenstown, Ireland, with Destroyers, Atlantic Fleet. He was transferred in January 1919 to the USS Wyoming, in which he served until October of that year. He then returned to the United States for duty at the Navy Yard, Mare Island, California, and aboard the Receiving Ship there, until June 1920.

Rear Admiral Challenger reported for duty under instruction at the Submarine School, New London, Connecticut, attached to the USS Fulton, and qualified for submarine duty in September 1920. Thereafter he served until May 1922 in the USS-0-10, after which he successively commanded the USS L-2 , the USS 0-9 and the USS 0-13, all operating with Submarine Division 8, based on Coco Solo, Canal Zone. When the latter vessel was placed out of commission in June 1924, he was detached to duty as Executive Officer of the USS s-24. In October of that year he assumed command of the USS S-12, operating with Submarine Division 3. From August 1925 until May 1926 he had duty in the USS Chewink, tender for the Submarine Base, New London, Connecticut.

Rear Admiral Challenger served from May 1926 until August 1927 as Aide and Flag Lieutenant on the staff of Commander Control Force, operating in the Atlantic, and during that period was attached to the USS Camden, flagship. He then returned to the Naval Academy for duty until August 1940. And while in that assignment had additional duty aboard the USS Babbitt, for the Midshipman’s Summer Cruise, training personnel in Seamanship, Navigation and Gunnery. For two years thereafter he had duty first at the Philadelphia Navy Yard, in connection with fitting out Submarine Division 9, and upon commissioning on September 5, 1940, as Commander of that Division, later redesignated Submarine Division 31.

For outstanding services in command of Submarine Division 31, operating with Submarine Force, Atlantic Fleet, during the early period of the War, December 1941 until May 1942, Rear Admiral Challenger received a Letter of Commendation, with authority to wear the Commendation Ribbon, from the Commander in Chief, Atlantic Fleet.

Rear Admiral Challenger completed the Junior Course at the Naval College, Newport, Rhode Island, in November 1942, and reported to the Office of the Chief of Naval Operations, Navy Department, Washington, DC, where he remained throughout most of the war as Logistics Planning Officer. For exceptionally meritorious service in that assignment, from November 10, 1942 until March 10, 1945, he was awarded the Legion of Merit with the following citation:

“For exceptionally meritorious conduct in the performance of outstanding services to the Government of the United States as a Logistics Planning Officer, Division of Logistics Plans, Office of the Chief of Naval Operations, from November 10, 1942, to March 10, 1945. Applying his comprehensive knowledge and a well-balanced sense of judgment to the fulfillment of a difficult assignment, Captain Challenger was largely responsible for the successful development of the logistics planning of the Navy for operations in the Northwest European and Mediterranean theaters of war and for the preparation of the Navy Overall Logistics Plan. By his diligence, initiative and loyal devotion to duty, Captain Challenger contributed notably to the success of the entire logistics program of support of Naval operations during World War II, thereby reflecting great credit upon himself and the United States Naval Service,”

In May 1945 Rear Admiral Challenger reported for duty with Commander Cruisers, Pacific Fleet, and was assigned command of the USS Phoenix. For meritorious service during the assault and occupation of Brunei Bay and Balikpapan, Borneo, in June and July 1945, he was awarded the Bronze Star Medal with Combat “V.” (Citation not available.) He was detached from the Phoenix in November 1945, and returned for duty in the Office of the Chief of Naval Operations, Navy Department, until January 1946. For a year afterward he served as Navy Member of the Executive Committee, Army- Navy Munitions Board, Washington, DC.

Rear Admiral Challenger was retired at his own request on January 1, 1947, after thirty years of Naval Service, and was at that time relieved of all active duty.