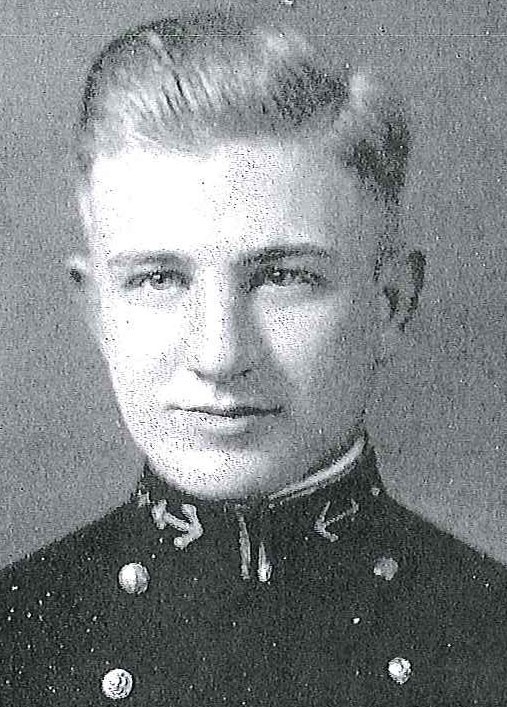 Henry Albert Arnold was born in Chewelah, Washington, on February 18, 1914, son of Mrs. Augusta Hoff Arnold and the late Mr. Henry Arnold. He attended Washington State College for a year prior to his appointment to the US Naval Academy, Annapolis, Maryland, in 1932. As a Midshipman he played football for four years and was Sports Editor of “The Log.” He was graduated and commissioned Ensign on June 4, 1936, and through subsequent promotions attained the rank of Commander to date from March 15, 1944.

Upon graduation from his Naval Academy in June 1936, he was assigned to USS Mississippi, and served for two years as a junior officer in that battleship, operating with battleship Division Three, Battle Force. He next had postgraduate instruction at the Massachusetts Institute of Technology, at Cambridge, graduating with the degree of Master of Science in Naval Construction in June 1941 for duty at the Navy Yard, Portsmouth, New Hampshire, He remained there throughout most of the World War II period, engaged in design and construction of submarines.

In 1945 he was detached and ordered to duty as a member of the US Naval Technical Mission to Europe, to investigate German submarines. For this service he received a Letter of Commendation, with Ribbon, from the Secretary of the Navy. The Commendation states that “During the exploitation of the North German Coast by the Naval Technical Mission in Europe, Commander Arnold was leading investigator in the evaluation of German Submarine Design….”

He was assigned in 1946 to the Bureau of Ships, Navy Department, Washington, DC, and as a Representative of that Bureau was a member of Joint Task Force ONE. For his part in the Operation CROSSROADS (Submarines), the Atom Bomb Tests at Bikini in the summer of that year, he received a Letter of Commendation from the Secretary of the Navy. In January 1947 he was transferred to the Mare Island (California) Naval Shipyard, and remained on duty there until February 1950, first as Design Superintendent, later as Assistant and Acting Repair officer. He is now on duty as Industrial Officer and Submarine Program Officer at the David Taylor Model Basin, Carderock, Maryland,