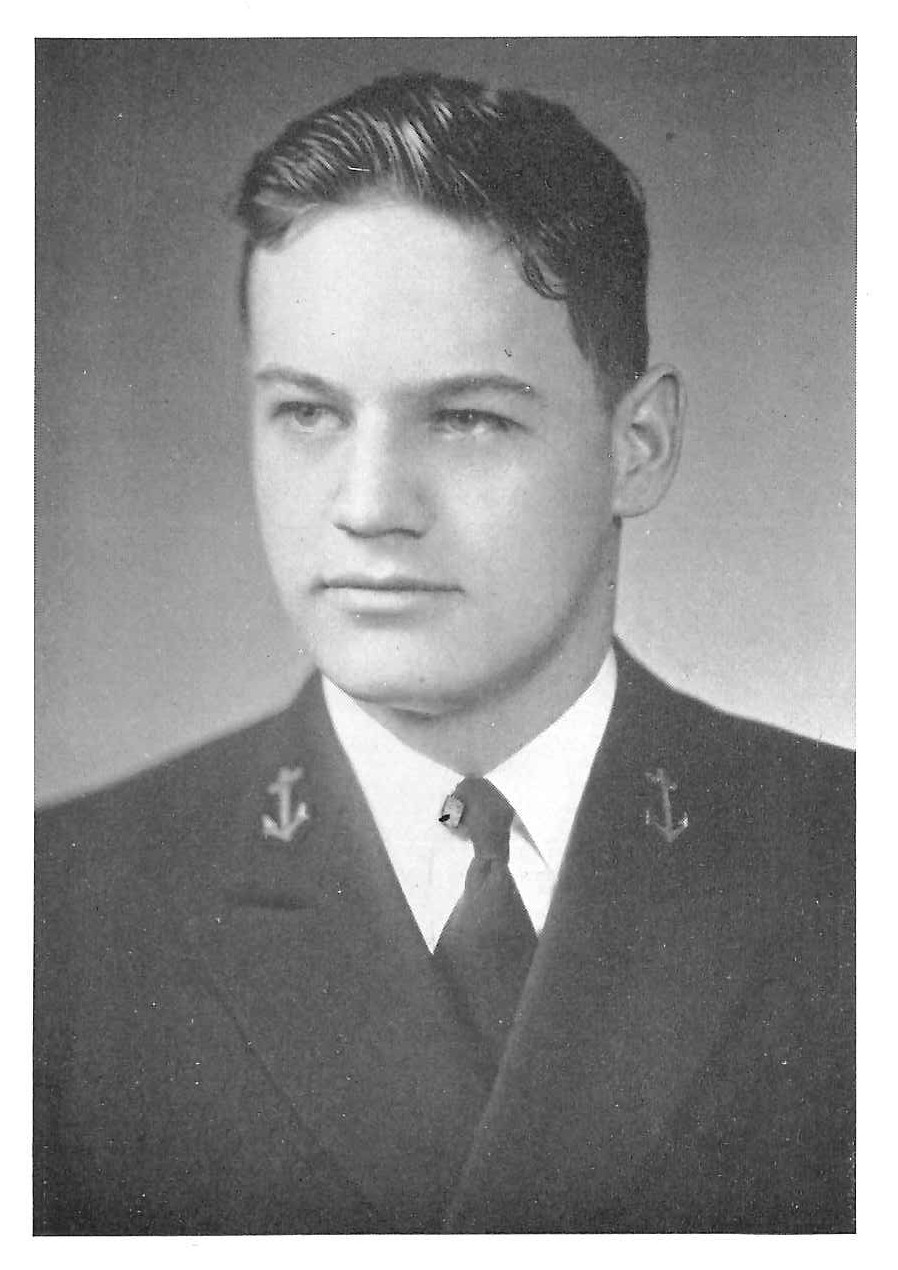 William Roy Barnes was born on March 26, 1913, at Quincy, Illinois, son of Roy H. and Mary Louise (Snyder) Barnes.  He attended Burlington High School and Junior College in Burlington, Iowa, and entered the US Naval Academy, Annapolis, Maryland, on appointment from the First District of Iowa in 1931.  Graduated with the degree of Bachelor of Science and commissioned Ensign in the US Navy on June 6, 1935, he subsequently advanced to the rank of Captain to date from May 1, 1954.

Following graduation from the Naval Academy in June 1935, he was assigned to the USS Houston, and had duty as a junior officer on board that cruiser for one month, then was transferred to the USS Omaha for two years’ service.  He remained at sea, with successive service as Communications Officer of the USS Sirius and USS Russell, and was Gunnery Officer of the latter (DD-414) on Neutrality Patrol in the North Atlantic during the period prior to the outbreak of World War II in December 1941.  He assisted in fitting out the USS Forrest(DD-461) and served as her Gunnery Officer, later Executive Officer, from her commissioning on January 13, 1942, until February 1944, in the North Atlantic.

The same month he assumed command of the USS Ludlow (DD-438), which was assigned to the Mediterranean Sea and the EIGHTH Fleet during his period of command, until March 1945.  He was awarded the Legion of Merit, with Combat “V” and later was awarded the Silver Star Medal.  Citations follow, in part:

Legion of Merit: “For exceptionally meritorious conduct…as Commanding Officer of the USS Ludlow, operating as a unit of an anti-submarine hunting group in the search for and destruction of an enemy submarine (the U-960) off Oran, Algeria, on May 18 and 19, 1944.  After making sound contact with the hostile craft, Lieutenant Commander Barnes skillfully coordinated his attack with that of the USS Niblack to carry out brilliantly executed depth charge pattern on the submerged enemy vessel and assist in forcing it to the surface to be sunk by the accurate combined gunfire of both ships…(He) contributed materially to clearing the Mediterranean coast routed of hostile U-boats…”

Silver Star Medal: “For conspicuous gallantry and intrepidity as Commanding Officer of the USS Ludlow in action against enemy forces during amphibious operations off Southern France in August and September 1944.  Operating as a unit of the fire support group attacking enemy coastal defenses on the right flank of the main assault area, Commander Barnes approached the shore through mine-infested waters and, in the face of intense hostile fire, laid down smoke screen and carried out a bombardment against enemy installations and concentrations, subsequently assisting in an attack on a number of human torpedoes and the capture of their operators as prisoners of war.  By his skill and courage, he aided directly in the establishment of the beachhead and the rapid advance of the Allied assault forces…”

Upon detachment from the LUDLOW, he returned to the Naval Academy, reporting on March 26, 1945, and served in the Executive Department during the remaining war period and until June 1947.  He then assumed command of the USS Ernest G. Small (DD-838), which was assigned to occupation duty in the European Area.  Detached in March 1949, he had two years as Executive Officer and Associate Professor with the Naval Reserve Officers Training Corps Unit, Rensselaer Polytechnic Institute, Troy, New York.  He them commanded the USS Noa (DD-841) from March 1951 until April 1952, and for sixteen months thereafter served as Executive Officer of the USS Newport News (CA-148).

He was Officer in Charge of the Gunfire Support School, Naval Amphibious Training Unit, Amphibious Base, Little Creek, Virginia, for three years, after which, from August 1956 until June 1960 he was again at sea, serving successively as Commander Destroyer Division 62; Commanding Officer of the USS Pawcatuk (AO-108); and Commander Destroyer Squadron 28.  Under orders of March 9, 1960, he served as Commander Fleet Training Group, San Diego, California, and on July 25, 1961, was ordered detached for duty as Chief of Staff and Aide to Commander Training Command, Pacific.

In addition to the Silver Star Medal and the Legion of Merit, with Combat “V,” Captain Barnes has the American Defense Service Medal, with Bronze “A”; the European-African-Middle Eastern Campaign Medal with four operation stars; American Campaign Medal; World War I Victory Medal; Navy Occupation Service Medal, Europe Clasp; and the National Defense Service Medal.  He also has been awarded the Croix de Guerre with Silver Star by the French Government for his service in the liberation of France, and the Brazilian Order of Naval Merit by the Government Brazil.