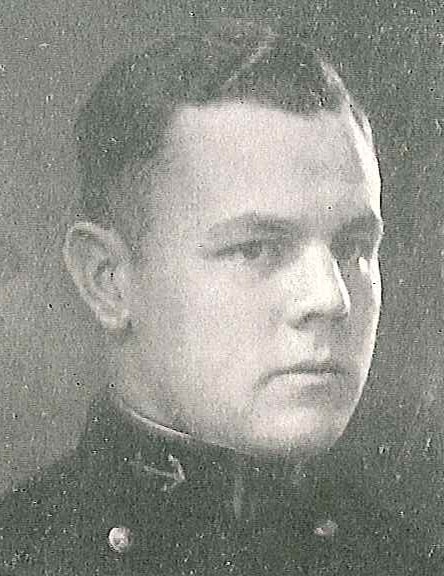 Barton Elijah Bacon was born in Rockwood, Tennessee, on October 18, 1901, son of Mrs. Margaret L. (McDaniel) Bacon, and the late Barton E. Bacon, and a descendant of Sir Francis and Roger Bacon.  He attended public schools in Rockwood, and Marion Institute, Marion, Alabama, before entering the US Naval Academy, Annapolis, Maryland, from his native state in 1921.  As a midshipman he played class football for four years.  Graduated and commissioned Ensign on June 4, 1925, he subsequently progressed in grade to that of Captain to date from July 20, 1943.

After graduation from the Naval Academy in June 1925, he served for two years in USS Idaho, a unit of Division 4, Battleship Divisions, Battle Fleet.  Instruction in submarines at the Submarine School, New London, Connecticut, from July until December 1927 was followed by more than four years’ duty in USS S-26, operating with Submarine Division Four and later with Submarine Divisions Eleven and Eight, of Submarine Force, Pearl Harbor, Territory of Hawaii.

On July 15, 1932, he reported for brief instruction at Twelfth Naval District Headquarters, San Francisco, California, after which he served as Communication Watch Officer there for a year.  He next had three years’ duty in the submarine Argonaut, a unit of Submarine Division 7, Submarine Force, Pearl Harbor, and during that period of service had duty as Gunnery Officer of that submarine.  In 1937, he returned to the West Coast for duty as Ship Service Officer and Aide to the Executive Officer of the Naval  Air Station, San Diego, California.

In April 1939, he assumed command of USS Pickerel, and remained in that command for three years.  During that time, the United States entered World War II (December 8, 1941) and the Pickerel engaged in War Patrols in the Asiatic Area.  For “extraordinary heroism as Commanding Officer of the USS Pickerel during five war patrols in the Asiatic Theater of operations…” he was awarded the Navy Cross.  The citation states further “… (he) aggressively attacked a Japanese supply ship and a troop transport, sinking both vessels.  In other actions…inflicted heavy damage on a number of Japanese ships…”

Relieved of command of the Pickerel, he reported in October 1942 for duty as an instructor in the Submarine School, New London, Connecticut, until January 1944, and for nine months thereafter, as Officer in Charge of the Submarine School.  He was awarded the Legion of Merit for “exceptionally meritorious service” in that assignment, the citation stating further “By his initiative and devotion to duty, he contributed materially to the subsequent combat successes of graduates of the school and upheld the highest traditions of the United States Naval Service.”

Again ordered to duty afloat, he reported in October 1944 as Commander Submarine Division One Twenty One, operating out of Australia.  During the months prior to the cessation of hostilities in August 1945, he also commanded Submarine Squadron Twenty-Six in Subic Bay, and was in command of a Repair and Maintenance Group in connection with operations against enemy Japanese forces.  The citation accompanying the Gold Star in lieu of the Second Legion of Merit awarded him for “exceptionally meritorious conduct” in those assignments, from November 1944 until August 1945, states in part:

“Serving with distinction throughout, (he) demonstrated outstanding ability in administering, refitting, and training the submarines under his command.  As a result of his untiring efforts, his squadron refitted twenty-nine submarines in a period of eight months and effected emergency and voyage repairs to twelve submarines.  By instituting an excellent training program, he aided immeasurably in the destruction of all ships ttotaling66, 570 tons, and the damaging of five ships totaling 2,200 tons…”

After serving from December 21, 1945 until December 1946 in command of USS War Hawk (AP 168), on “Magic Carpet” duty, returning veterans from combat areas to the United States, he again had submarine duty, this time in command of Submarine Squadron 5 based a Pearl Harbor.  On September 3, 1947, he was ordered detached and to duty as Chief of Staff and Aide to Commander, Submarine Force, Pacific Fleet, in which capacity he served for two years.

He was Commander Submarine Force Administration, US Pacific Fleet, with headquarters at Mare Island Naval Shipyard, Vallejo, California, from September 1948 until October 1950, when he was assigned to the Twelfth Naval District with headquarters in San Francisco, California, for duty in connection with legal matters, and on the Physical Evaluation Board.  In July 1951, he became Administrative Officer at the Puget Sound Naval Shipyard, Bremerton, Washington, and in that capacity was concerned with the supervision of military and civilian personnel and was Chairman of the Security Board and of the Development Board.  In April 1954, he was ordered to report as Deputy Chief of Staff to Commander Naval Forces, Far East.

In addition to the Navy Cross and the Legion of Merit with Gold Star, Captain Bacon has the Army Distinguished Unit Badge (defense of the Philippines); the American Defense Service Medal; the American Campaign Medal; the Asiatic-Pacific Campaign Medal with three engagement stars; World War II Victory Medal; Navy Occupation Service Medal; Philippine Defense Ribbon with one star; and the Philippine Liberation Ribbon.