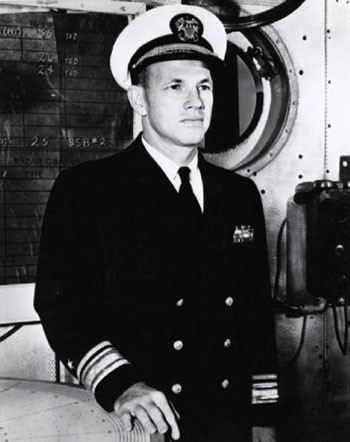 Lloyd Montague Mustin was a Vice Admiral in the US Navy who served during World War II. He was born at the Navy Yard, Philadelphia, Pennsylvania to a family rich in naval tradition. His father, Captain Henry C. Mustin, USN, was a pioneer in naval aviation. His great grandfather, Commodore Arthur Sinclair, USN, commanded the US Naval Squadron on Lake Ontario during the War or 1812. His great grandfather, Captain Arthur Sinclair, USN, commanded one of Commodore Perry's ships in the opening of Japan and later served as a captain in the Confederate States Navy during the Civil War.

He entered the United States Naval Academy in 1928. After receiving his diploma in 1932, he was assigned to the cruiser Augusta (CA 31). Four years later he was transferred to the destroyer Lamson (DD 367). He received instruction in ordnance engineering at the Naval Postgraduate School in 1938 before attending the Massachusetts Institute of Technology where he completed course work leading to a Master of Science Degree in Electrical Engineering, awarded in June 1940. In the fall of 1940 he was assigned to duty in the Bureau of Ordnance were he served as Assistant Production Office at the Naval Gun Factory, Washington, DC and took part in developing the Mark 14 gunsight.

At the outbreak of World War II, Mustin was Assistant Gunnery Office of the cruiser Atlanta (CL 51) and was in her when she was sunk during the Battle for Guadalcanal on the night of 13 November 1942. He received the Fleet Commander's Commendation (with ribbon) for outstanding service in the battles. He landed on Guadalcanal with the survivors and served there for three months with the small naval unit attached to the First Marine Division.

In 1943-1944 he had consecutive duty in the cruisers San Diego (CL 53) and Miami (CL 89). He next served as Gunnery, Radar, and CIC Officer on the staff of Commander Battleship Squadron Two, Vice Admiral Willis A. Lee, USN, and in the summer of 1945 was with Admiral Lee in establishing the Operational Development Force, as Gunnery, Radar, and CIC Officer.

After World War II, Mustin was ordered to the Navy Department, Washington, DC, for duty as Head of the Fire Control Branch, Research Division, Bureau of Ordnance. This duty was followed by service afloat in command of the destroyer Keppler (DD 765) and later as ASW Officer and Readiness Officer on the Staff of Commander Destroyer Force, Atlantic. Between 1951 and 1954 he was assigned to the Weapons System Evaluation Group, Office of the Secretary of Defense, and after command of the destroyer tender Piedmont (AD 17), had command of Cruiser-Destroyer Force, Pacific, from April 1957 until May 1958, when he reported as Commander Destroyer Flotilla Two.

While so serving he had additional duty from May to October 1958, in command of Task Force 88, a special task force organized to plan and conduct the Argus high-altitude nuclear tests which were fired in a remote part of the South Atlantic. In October 1958 he assumed additional duty in command of Antisubmarine Defense Group "Charlie", and from February through April 1959 commanded Task force 88 conducting combined ASW training operations with the navies and air forces of the countries on the west coast of South America.

On 13 June 1959, he became Commander Naval Base, Key West, and Commander Key West Force and in May 1960 reported for duty in the Office of the Chief of Naval Operations, first as Antisubmarine Readiness Executive and then as Director of Antisubmarine Warfare.

On 1 June 1964, he became Director for Operations, J-3, Joint Staff, Joint Chiefs of Staff, Washington, DC. In May 1967 he became Commander Amphibious Force, US Atlantic Fleet and in July 1968 assumed duty as Director of the Defense Atomic Support Agency, Washington, DC. He served in that capacity until relieved of active duty pending his retirement, effective 1 August 1971. 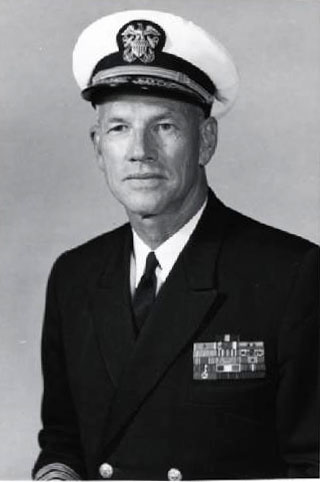 Foreign Decorations:
Peruvian Cross of Naval Merit in the Degree of Senior Officer White Badge
Decoration of the Grand Star of Military Merit (Republic of Chile)

"For exceptionally meritorious service...as Director for Operations, Joint Staff, Organization of the Joint Chief of Staff, from June 1964 to May 1967. As Head of the Operations Directorate - the instrument for direction of the unified and specified commands - Vice Admiral Mustin developed a highly efficient and responsive organization, capable of directing a major war effort, from a relatively untested structure. As a result of his keen and imaginative guidance, astute judgment, comprehensive knowledge and able administration, complex operational analyses were made, and strategic plans developed and implemented, for two critical national undertakings - intervention in the Dominican Republic crisis of 1965, and combat operations in Southeast Asia. Vice Admiral Mustin played a leading role in formulating the plans for the air campaign against North Vietnam, and was personally instrumental in developing a combat reporting system to support operational analyses, resulting in reduced aircraft losses. In other fields, he took the lead in refining the National Single Integrated Operations Plan, in improving the national command and control systems, and in applying modern operations analysis techniques to military operations at the National level. By his outstanding professional competence and inspiring devotion to duty, Vice Admiral Mustin has rendered exceptionally distinguished service of enduring value to the nation, contributing greatly to the security of the United States . . ."

Gold Star in lieu of the Second Distinguished Service Medal:

"For meritorious service...as Director, Defense Atomic Support Agency, from July 1968 to August 1971 consistently displaying an outstandingly high degree of professional skill, foresight, Initiative and dedication, (he) successfully directed a wide range of technical, operational and administrative activities which substantially strengthened the entire spectrum of national nuclear weapon capabilities, while at the same time achieving major economies of personnel and money...In connection with the exchange of atomic information for mutual defense purposes, he displayed exceptional judgment and diplomacy toward strengthening existing ties and maintaining the most cordial relationships with representatives of North Atlantic Treaty Organization countries in the complex matter of the exchange of sensitive information of a politically delicate context . . ." 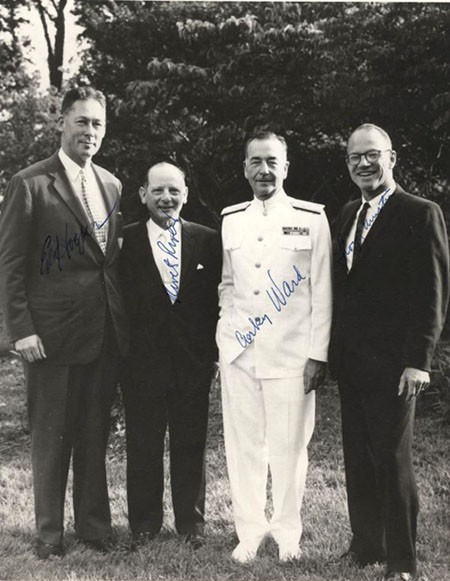 "For exceptionally meritorious conduct in the performance of outstanding services as Commander Task Force Eighty-Eight, during the period May 22, 1958 through October 1, 1958, in which Task Force Eighty-Eight conducted a particularly complex and difficult special test program of great importance to the Navy. Exercising unusual technical and professional competence, Rear Admiral Mustin, planned, organized, and personally directed a major task force in carrying out extended operations at sea without external logistic support for a period of approximately sixty days. These operations were successfully completed under the most adverse conditions. By his outstanding leadership and inspiring devotion to duty throughout, Rear Admiral Mustin upheld the highest traditions of the United States Naval Service."

"For exceptionally meritorious conduct...from November 25, 1961 to May 25, 1961...During this period, (he) served as Deputy Commander, Joint Task Force Eight, as Commander of the Naval Task Group of that force, and from October 27, 1962 to May 25, 1964 as Commander of Joint Task Force Eight. He directed planning for and execution of the most complex and most successful operations in the history of United States nuclear testing, first as Commander of Naval Forces, the largest Task Force component, and subsequently as Commander of the entire 22,000-man Task Force. His astute judgment in implementing test objectives resulted in maximum operational effectiveness without the sacrifice of safety for test participants, and enabled the United States to secure an unprecedented volume of very important scientific data that significantly increased its nuclear weapons preparedness and defense capabilities. (He) has been instrumental in achieving a readiness-to-test status which will make possible a rapid United States reaction to abrogation of the Limited Nuclear Test Ban Treaty. His actions have contributed significantly to the nation's security through the establishment of an atmospheric nuclear test capability which serves as a strong deterrent to the resumption of testing by other nations..."

"For devotion to duty under adverse conditions while serving on board a ship which was badly damaged during the engagement with Japanese naval forces off Guadalcanal on November 13, 1942. Lieutenant Commander Mustin with complete disregard for his own safety and with outstanding ability organized crews of the remaining guns to repel further attack. He also exposed himself to extreme hazard in assisting with damage control measures, and in evaluating the damage to his ship..."

"For meritorious conduct...while serving as Gunnery Officer of the USS Miami during the Marianas, Western Carolines, Leyte, and Luzon campaigns from December 28, 1943 to February 1, 1945. His professional skill and devotion to duty contributed materially to the maintenance of the Gunnery Department in a high state of efficiency, thus enabling the ship to successfully carry out its mission. He assisted his Commanding Officer in fighting the ship during repeated enemy air attacks, shore bombardments on enemy-held territory and extensive operations in support of carrier strikes against the enemy..."

"For outstanding performance during action against enemy Japanese forces off Guadalcanal Island, November 12/13, 1942. Struck by one torpedo and no less than 49 shells, the Atlanta, after sinking an enemy destroyer and repeatedly hitting a cruiser which later went down, gallantly remained in battle under auxiliary power with one-third of her crew killed or missing, her engine room flooded and her topside a shambles. Eventually succumbing to her wounds after the enemy had fled in defeat, she left behind her a heroic example of Invincible fighting spirit."

"The officers and enlisted men of the First Marine Division, Reinforced...demonstrated outstanding gallantry and determination in successfully executing forced landing assaults against a number of strongly defended Japanese positions...completely routing all the enemy forces and seizing a most valuable base and airfield within the enemy zone of operations in the South Pacific Ocean...This Reinforced Division not only held their important strategic positions despite determined and repeated Japanese naval, air and land attacks, but by a series of offensive operations against strong enemy resistance drove the Japanese from the proximity of the airfield and inflicted great losses on them by land and air attacks..."