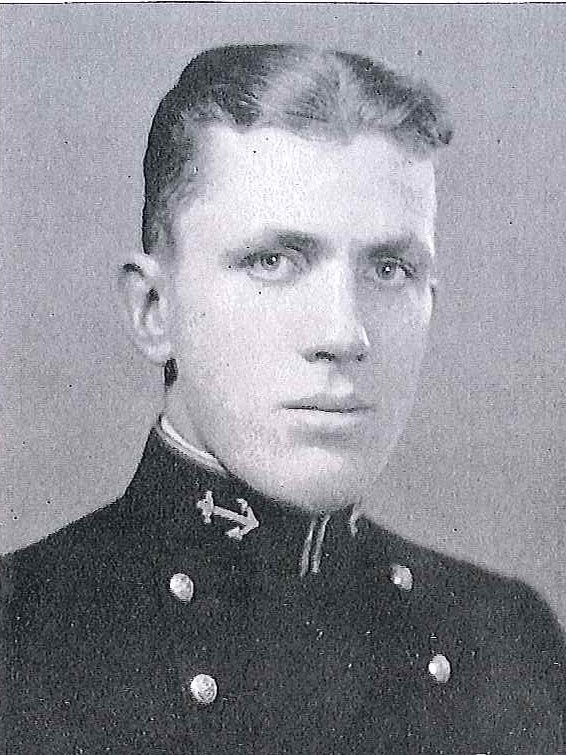 Daniel Carlson was born in Carthage, Missouri, on October 3, 1905, son of Andrew Peter and Hulda Josephine (Anderson) Carlson, both now decreased. He attended Bagley and Ballard High Schools in Seattle, Washington and in January 1923 enlisted in the US Navy. He had “boot training” at Goat Island, San Francisco, California, duty in USS Milwaukee and attended the Naval Academy Preparatory School at the Naval Training Station, San Diego, California. He was honorably discharged to enter the US Naval Academy, Annapolis, Maryland, on appointment of President Coolidge (at large) in 1925. As a Midshipman he won 1929, he subsequently advanced in rank attaining that of Captain, to date from March 30, 1945.

After graduation from the Naval Academy in 1929, he had successive service afloat in the battleships New Mexico, Idaho, and Nevada and the seaplane tender Wright. For a year, June 1933-June 1934, he had temporary additional duty with the US Army as Camp Commander of the Civilian Conservation Corps Camps in Oregon and California.

After submarine training at the Submarine Base, New London, Connecticut, he reported in May 1935 on board USS S-28, operating with the Submarine Force based at Pearl Harbor, TH.  In April 1937 he was detached from that submarine for duty as War Plans Officer on the staff of the Commandant of the Thirteenth Naval District with headquarters in Seattle, Washington. While in that assignment he had temporary additional duty in command of USS Eagle 57.

He joined USS Phelps in June 1939 and served as her Gunnery Officer until June 1941, and as her Executive Officer until detached in January 1942, shortly after the United States entered World War II. He next assisted in the fitting out of USS Massachusetts and served in that battleship from her commissioning, May 2, 1942 until July 1944, participating in the Algeria-Morocco landings and in action off Casablanca. During the latter the Massachusetts was credited with the sinking of the French battleship Jean Barte, two destroyers, a submarine and many merchant ships.

On November 17, 1944 he assumed command of USS Paul Hamilton, which under his command took part in the landings at Mindoro, Lingayen Gulf, Iwo Jima and Okinawa. For distinguished service in the Pacific Area, he was awarded the Legion of Merit with Combat “V”, and the Bronze Star Medal, also with “V”. The citations follow in part:

Legion of Merit: “For exceptionally meritorious conduct . . . as Commanding Officer of the USS Paul Hamilton, in operations against enemy Japanese forces while escorting a Resupply Echelon  between Leyte Gulf and Mangarin Bay, Mindoro, Philippine Islands, from December 27, 1944 to January 2, 1945 . . . (contributing) in large measure to the protection of his convoy during this hazardous operation by assisting in the destruction of thirty-seven enemy planes and by repulsing and damaging  numerous others. . .”

Bronze Star Medal: “For meritorious achievement as Commanding Officer of USS Paul Hamilton . . . during the assault and capture of Okinawa from March 25 to June 17, 1945. . . (he) directed the operation of his ship to accomplish successfully every assigned mission, and in inflicting maximum damage on enemy aircraft and shore installations, contributed materially to the success of a very difficult amphibious operation. . .”

Detached from the Paul Hamilton in September 1945, the next month he became Commanding Officer of the U.S. Naval Personnel Seperation Center at the Naval Air Technical Training Center, Norman, Oklahoma. While in command of that Center 80, 000 men from the States of Oklahoma, Kansas and North Texas, were separated from the Navy. He remained there until September 1946, and in November reported as Executive Officer of the Naval Ammunition Depot, Hastings, Nebraska. He next attended the Senior Course in Strategy and Tactics at the Naval War College, Newport, Rhode Island, July 1948-May 1949, and in July assumed command of the oiler Tolovana.

He was Head of the Department of Correspondence Courses at the Naval War College from August 1950 until June 1953 and the next month reported as Chief of Staff to the Commander Blockading and Escort Force, Pacific. In September 1954 he became Commander Destroyer Squadron FOURTEEN and in November 1955 joined the Joint Staff of the Commander in Chief, Europe as Deputy Director of Welfare and Morale. Since July 1958 he has been assigned to the staff of the Commander of the Naval Base, Newport, Rhode Island.

Mrs. Carlson, formerly a newspaper reporter for the Long Beach (California) Sun, has contributed many stories to Playmate, Jack and Jill and various other children’s magazines. Her first book for children, “The Talking Cat and Other Tales of French Canada,” published by Harper Brothers (1952), received the New York Herald Tribune Award for the best book in the age group of eight to twelve years, at the Spring Festival, 1952. Her second book, “Alphonse, That Bearded One,” published by Harcourt Brace Company (1954), was awarded a similar award in the picture book group in 1954. “Wings Against the Wing,” her third book was published by Harper Brothers in 1955.

As a hobby, Captain Carlson has learned to call and teach square dancing. He has taught approximately five hundred couples the “ins and outs” of “Do-ci-do.”