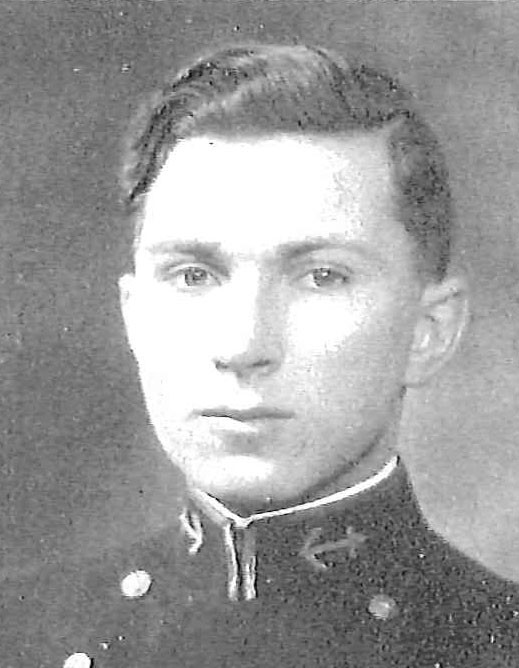 George Mitchell Chambers was born in Grand Rapids, Michigan on January 14, 1907, son of John F. and Clara (L’Huillier) Chambers. He attended St. John’s Military Academy, Delafield, Wisconsin, prior to his appointment to the US Naval Academy, Annapolis, Maryland, from his native state in 1926. Graduated and commissioned Ensign on June 5, 1930, he subsequently progressed in rank, attaining that of Captain, to date from July 1, 1949, having served in that rank (temporary) from December 10, 1945 until December 1, 1947. On December 1, 1955 he was transferred to the Retired List of the US Navy, and was advanced to the rank of Rear Admiral on the basis of combat awards.

He was assigned to the Naval Training Station, Newport, Rhode Island, and in May 1944 was ordered to duty in connection with the fitting out of USS Hank. He assumed command of that destroyer at the Navy Yard, New York, New York, upon her commissioning, August 28, 1944. For outstanding services while commanding the Hank, he was awarded the Bronze Star Medal and a Gold Star of the lieu Second Bronze Star Medal, each with Combat “V,” The citation follow in order of date of action:

Gold Star in lieu of Second Bronze Star Medal- “ For meritorious achievement… during action against enemy Japanese forces in the Western Pacific War Area from December 20, 1944 to May 15,1945. Responsible for organizing and training a new and inexperienced crew and for developing it into an effective fighting unit, (he) led his command in widespread actions against the enemy from Luzon, the Indo-China Coast and Formosa to Iwo Jima, Okinawa and the Japanese Home Islands. Repeatedly under fierce hostile air attack while operating with a Fast Carrier Task Force, he contributed, to the destruction of many enemy aircraft. On April 11, while on single picket duty, he fought his ship gallantly against the simultaneous attacks of two Japanese suicide planes and, by his superb ship handling in coordination with the aggressive gunnery of his, destroyed the attacking aircraft…”

Bronze Star Medal- “For meritorious achievement as Commanding Officer of the USS Hank during operations against enemy Japanese forces while on radar picket duty in the Japanese Homeland on August 9, 1945. Subjected to enemy suicide plane attacks on four separate occasions over a period of an hour and a half, (he) coolly directed his gun batteries in fighting off repeated enemy attempts to destroy with bombs and suicide tactics the four-destroyer unit of which his ships was a member. By his capable leadership, he accomplished his ship’s assigned mission while protecting a partially crippled friendly vessel…”

He was also awarded the Purple Heart Medal for wounds received in enemy action on May 14, 1945.

Detached from command of the Hank on October 1945, he then joined the staff of Commander San Diego Group, Nineteenth Fleet. In September 1946 he became Chief Inspector, San Diego Group, and late later was assigned to the Long Beach Group, Pacific Reserve Fleet. In August 1948 he reported as Repair Superintendent at the Boston (Massachusetts) Naval Shipyard, where he remained until August 1951. He then reported as Head of the Machinery Design Branch, Bureau of Ships, Navy Department, Washington, DC. He was ordered in August 1954 to duty as Supervisor of Shipbuilding and Naval Inspector of Ordnance, New York, New York, where he remained until relieved of all active duty pending his retirement, effective December 1, 1955.