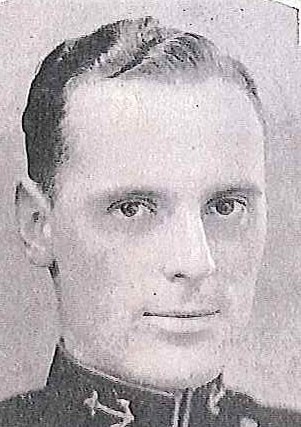 John Edmondson Fitzgibbon was born in Newark, Ohio, on July 25, 1903, son of Frank E. and Margaret Edmondson Fitzgibbon. He attended Newark (Ohio) High School and Marion (Alabama) Institute before entering the US Naval Academy, Annapolis, Maryland, in 1923. He was graduated and commissioned Ensign on June 2, 1927, and through subsequent promotions attained the rank of Captain, to date from March 25, 1945. He was transferred to the Retired List of the Navy on July 1, 1952, and advanced to the rank of Rear Admiral on the basis of combat citations.

After graduation from the Naval Academy in June 1927, he served at sea for a year in the USS Wyoming, flagship of the Scouting Fleet. He was next ordered at Asiatic Station, where he had duty until 1931 in USS Pittsburgh, flagship of Asiatic Fleet. Later that year, he joined USS Gamble, light minelayer at Pearl Harbor, T.H., and continued duty aboard her until 1934. The following year he commanded USS Eagle #56, on Reserve Training duty at Norfolk, Virginia, and in 1935 again joined the Wyoming, then a unit of Drill Squadron, for duty until June 1936.

A year’s duty at the Naval Receiving Station, Naval Operating Base, Norfolk, Virginia, preceded further duty, during the period 1937-40, in USS Wyoming. He was next assigned to USS Aylwin, flagship of Destroyer Division 2, Battle Force, and served as her Executive Officer and Navigator until the summer of 1941, when he was ordered to the University of Michigan at Ann Arbor, for duty as an instructor in the Naval Reserve Officers Training Corps Unit.

In January 1942, soon after the United States entry into World War II, he was ordered to the Fourth Fleet, (later redesignated South Atlantic Force) for duty as Flag Secretary on the Staff of the Commander. He was awarded the Legion of Merit for “exceptionally meritorious conduct in the performance of outstanding service to the Government of the United States as Flag Secretary to the Commander South Atlantic Force….” The citation states that he “met the varied problems with forceful determination and succeeded in establishing a smooth-running organization which afforded effective support for the entire force…”

Detached from USS West Virginia in November 1945, he had temporary duty in the Bureau of Naval Personnel, Navy Department, Washington, DC, until assigned duty as US Naval Attache to Denmark, and served at the American Embassy, Copenhagen, from June 1946 to August 1948. After his return to the United States, he assumed command of USS Pawcatuck (AO-108). He was relieved a year later for service for a year in the Sixth Naval District, Charleston, South Carolina, as Assistant Chief of Staff (for Logistics) to the Commandant.

From October 1950 to May 1952 he was Commanding Officer of the Naval Administrative Command, Naval Training Center, Great Lakes, Illinois, after treatment at the Naval Hospital there, was retired for physical disability on July 1, 1952.

In addition to the Legion of Merit and Bronze Star Medal with Combat “V,” Rear Admiral Fitzgibbon has the American Defense Service Medal, Fleet Clasp; the European-African-Middle Eastern Campaign Medal; the Asiatic-Pacific Campaign Medal; the Philippine Liberation Ribbon; the World War II Victory Medal; and the Navy Occupation Service Medal, Asia Clasp. He also has been awarded the following foreign decorations: Commander of the Order of the Southern Cross, by the Government of Brazil; and Knight Command of the Order of Danneborg, by the Government of Denmark.