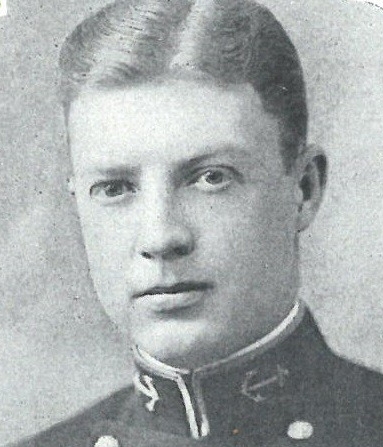 Richard Dewey Zern was born in Viola, Illinois, on 10 January 1905, son of John G. and Nellie Dewey Zern. He attended Western Illinois State Teachers College at Macomb, Illinois, for a year and a half before entering the US Naval Academy, Annapolis, Maryland, on 1 August 1923. He was graduated and commissioned Ensign on 2 June 1927, and subsequently attained the rank of Captain, to date from 20 March 1945. On 1 July 1957, he was transferred to the Retired List of the US Navy and advanced to the rank of Rear Admiral on the basis of awards for actual combat.

After graduation he remained at the Naval Academy for the course in Aviation Ground Training during June and July, 1927, and on 26 August, reported to USS Arizona (BB-39). He served as a Junior Officer in the gunnery department of that battleship until 13 June 1928, when he was transferred to USS Corry (DD-334) for twenty months’ duty as Communication Officer, with additional duty as Stores and Ship’s Service Officer and Assistant Gunnery Officer. His duties continued in USS Broome (DD-210) when the Corry was decommissioned and the Broome recommissioned in February 1930, and before his detachment on 31 May 1931, he had three months’ additional duty as Acting Navigator.

From June 1931 to May 1933 he was on board USS New York (BB-34), serving as Ship’s Secretary, J.O.A.A. Battery, and Watch and Division Officer; and for a year thereafter he served in USS Holland (AS-3) as Second Deck and 5” Gun Division Officer, and Watch and Division Officer. On 10 May 1934, he joined USS Whitney (AD-4) for transportation from Culebra Island, West Indies, to New York City, and on 28 June returned to Annapolis, where for a year he was a student (General Line) at the Naval Postgraduate School. He completed instruction on 31 May 1935, and the next day reported for duty in the Navy Department, Washington, DC.

In January 1937 he was designated Aide and Flag Lieutenant to Commander Battleship Division 2, and on 29 January 1938, began similar duty on the staff of Commander Battleships, Battle Force, attached successively to the flagships USS Arizona, USS Maryland, USS Tennessee and USS West Virginia. He was detached on 17 June 1939, and a month later returned to the Office of the Chief of Naval Operations, Navy Department, for duty in charge of designing and producing of US Navy Cryptographic Publications.

On 10 October 1941, he took passage on SS President Van Buren from San Francisco to Manila, P. I., to join the Asiatic Fleet. On 4 November 1941, he reported to USS Marblehead, as Navigator. As such he participated in the Battle of the Java Sea on 4 February 1942, and was on board during her famous voyage from Lombok Strait to New York via South Africa, about 15,000 miles, the first half of which was executed without rudder, all without gyro. He entitled to the Ribbon for, and a facsimile of the Navy Unit Commendation awarded the USS Marblehead as follows:

“For outstanding heroism in action against enemy Japanese aircraft in the Java Sea Area on 4 February 1942.  Operating without air support as a unit of a combined striking force of United States and Dutch cruisers and destroyers, the USS MARBELHEAD was steaming north through Lombok Strait when an overwhelming force of Japanese aircraft appeared and launched a series of continuing bombing attacks. Fighting her guns gallantly against the enemy planes, she suffered two direct bomb hits on deck and one very near miss that exploded well forward under the turn of the bilge. With her electric power lost, her steering gear jammed and more than ten percent of her company dead or seriously wounded, she was quickly enveloped in flames that raged fore and aft while in-rushing waters flooded her lower compartments and sent her twelve feet down by the bow. Expertly handled by officers and men who risked their lives to jettison ready service powder bags, lessen flooding in steering spaces and fight the fires that threatened to destroy her, she was enabled to continue in action and fight off additional and repeated air attacks by Japanese horizontal and dive bombers…and made port under her own power…”

During the period 15 August 1942, to 26 May 1945, he served as Aide and Flag Secretary, successively, to Commander Battleship Division SIX; Commander Battleships, U S Pacific Fleet; and Commander Battleship Squadron TWO, attached to flagships USS Washington, USS Massachusetts, USS North Carolina and USS South Dakota. While so assigned, he also served as Surface Operations Officer on the staff of Commander Carrier Division ELEVEN from 19 August to 12 September 1943.  He was awarded the Legion of Merit with Combat “V”, and cited, in part, as follows:

He returned to the United States in May 1945, and after brief temporary duty in the Bureau of Naval Personnel, Navy Department was designated Officer in Charge, Navy Unit, Armed Forces Radio Service, at Los Angeles, California. In that capacity he was concerned with producing, recording, and distributing radio transcriptions for Broadcast Radio – programs consisting of information, education and entertainment for the Armed Forces of the United States serving outside of the continental limits of the United States. Detached in June 1947, he was a student (Strategy and Tactics) at the Naval War College, Newport, Rhode Island, from July of that year until May 1948.

On 11 June 1948, he assumed command of USS Chikaskia (AO-54), a large fleet oiler of the Naval Transportation Service, transporting bulk petroleum products from the Persian Gulf to United States activities in Sicily, Ceylon and Japan. After thirteen months in that assignment, he returned to the Navy Department for duty as Coordinator for the Chief of Naval Communications with the Joint Communications-Electronics Committee of the Joint Chiefs of Staff. From May 1952 until September 1953 he was at sea in command of Destroyer Squadron FOUR (and Destroyer Division 41), and in October 1953 he began an assignment as Chief of Staff and Aide to Commander Training Command, Atlantic Fleet.

Reporting in September 1955 to the University of Michigan, at Ann Arbor, he served as Professor of Naval Science, attached to the Naval Reserve Officers Training Corps Unit, until relieved of all active duty on 30 June 1957.

Rear Admiral Zern died at Ann Arbor, Michigan, on 22 February 1958, and was buried at Arlington National Cemetery on 26 February. He was survived by his wife, the former Thelda Irene Burnett of Long Beach, California and a son.