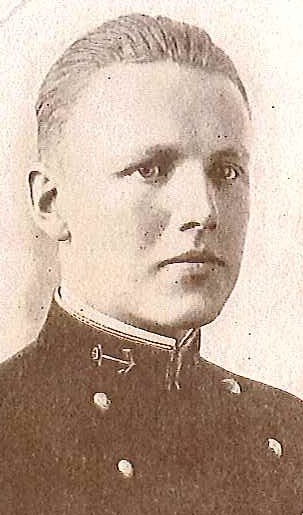 Rear Admiral Milton Oren Carlson was born in Minneapolis, Minnesota, January 11, 1895. On March 15, 1910, he enlisted in the Naval Militia, in Oregon, and was honorable discharged June 18, 1912, to accept appointment to the US Naval Academy, Annapolis, Maryland, from the First District of Oregon. He was graduated and commissioned Ensign June 3. 1916. He was temporarily commissioned Lieutenant, both grades during the first World War, and later commissioned regular Lieutenant  (junior grade) June 3, 1919, and Lieutenant July 1, 1920. He progressed in grade to the rank of Commodore on October 25, 1944, reverting to Captain on June 15, 1946. On August 1, 1947 he was transferred to the Retired List of the US Navy in the rank of Rear Admiral.

After graduation Rear Admiral Carlson was assigned to USS Utah, in which battleship he served continuously until December 11, 1918, except a brief period in 1917, at which time he was under instruction in torpedoes, aboard USS Montana.

After the war Rear Admiral Carlson was detached from the USS Utah and reported to the Force Commander, at his Headquarters in London, for assignment from there he proceeded to Murmansk, Russia, for further assignment. At this time he was assigned to the Naval Port Office, Murmansk, Russia, and later with additional duty in command of the Naval Radio Receiving Station at Murmansk.

Rear Admiral Carlson returned to the United States in August, 1919, and August 15, 1919 reported for duty in USS Renshaw. He was detached from that destroyer in October, 1920, and served for three months as the Executive officer of USS Thompson, when he reported on January 3, 1921 to the US Naval Academy, for a postgraduate course in Ordnance. From there he went to the Massachusetts Institute of Technology, Cambridge, Massachusetts, for duty under a special course of instruction in mechanical engineering (torpedoes). He received futher instruction at the Naval Torpedo Station, Newport, Rhode Island, and returned to the Massachusetts Institute of Technology in September, 1922, for a special course of practical instruction under the supervision of the Head of the Postgraduate School. On completion of that course, he received his Master of Science degree from Massachusetts Institute of Technology in 1923, and was later assigned to the Bureau of Ordnance, Navy Department, Washington, DC. On detachment from that duty he was transferred to the Submarine Division, Asiatic Fleet., and reported to USS Rainbow on August 23, 1923. He served in that division until August. 1923, when he was detached and reported for duty on board USS Stewart until July, 1925. He received the Navy Expeditionary Medal, as a member of the landing force ashore in Shanghai, China, from the USS Stewart in July 11, 1925.

Upon returning to the United States October 8, he served in USS Camden, until June, 1926. His next duty was attending a course of instruction at the Naval Torpedo Station, Newport, Rhode Island, where he remained until July, 1928. He reported to USS West Virginia in August, 1928 and served until May, 1930.

On May 28, 1933, he reported to USS Northampton for services as Gunnery Officer until June 11, 1935. He assumed command of USS Simpson on June 12, 1935. In June, 1936, he reported to the US Naval Academy, Annapolis, Maryland as an instructor at the Postgraduate School.

On March 5, 1939, Rear Admiral Rear Admiral Carlson assumed command of USS Charleston, and commanded her until December, 1940. From January, 1941, until February, 1944, he served at the Navy Yard, New York, New York. On February 23, 1944, he assumed command of the Fifth Amphibious Force and has served consecutively as Commander, Transport Division Thirty-Two; Transport Squadron Thirteen, and additional duty as commander Transport Division Thirty Seven. For action on Saipan during this command he received the Bronze Star Medal with the following citation:

“For meritorious achievement as Commander of a Transport Division during the assault and capture of Japanese-held Saipan, June, 1944. Skillfully directing the ships under his command, Commodore (then Captain) Carlson expeditiously landed assault troops and cargoes despite strong enemy opposition, thereby contributing in a great measure to the success of the entire operation. His devotion to duty reflects the highest credit upon Commodore Carlson and the United States Naval Service.”

Rear Admiral Carlson also received a Gold Star in lieu of the second Bronze Star Medal with the following citation:

“For meritorious achievement as Commander Transport Division Thirty-two, in operations against enemy Japanese forces during the assault and capture of Ulithi Atoll, in September, 1944. Although operating in dangerously mined waters and under difficult navigational conditions, Commodore (then Captain) Carlson skillfully directed the activities of his transport group and was in large measure responsible for keeping the group in operation, thereby contributing materially to the success of out forces in this area. His leadership and devotion to duty were in keeping with the highest traditions of the United States Naval Services

For further services in the South Pacific area he received the Legion of Merit award with the following citation:

“For exceptionally meritorious conduct in the performance of outstanding service as Commander of a Task Group assigned to duty with the Seventh Fleet during the period November 24, 1944, to January 17, 1945. In organizing training and operating his Task Group, Commodore Carlson showed exceptional ability and outstanding professional skill. In directing his Task Group in the landing of assault forces of the enemy held territory in Lingayen Gulf, Luzon, Philippine Islands he displayed outstanding resourcefulness and judgement and made a substantial contribution to the successful accomplishment of the mission. His personal courage and leadership throughout were in keeping with the highest traditions of the Naval Service.

On May 2, 1946 he was ordered to duty as Commanding Officer of the Naval Torpedo Station, Newport, Rhode Island, reverting to Captain upon assuming command. He served in that assignment until August 1, 1947, when he was transferred to the Retired List of the United States Navy.