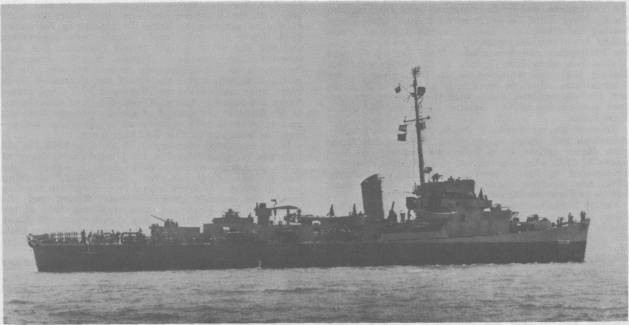 Caption: USS Stewart (DE-238) as completed, 20 May 1943. Like many other DE's at this time, she had a triple torpedo-tube mount originally removed from one of the old "flushdeck" destroyers.

Charles Stewart was born at Philadelphia, Pa., on 28 July 1778. He went to sea at the age of thirteen as a cabin boy and rose through the grades to become master of a merchantman. During the Quasi-War with France, Stewart was commissioned a lieutenant in the United States Navy on 9 March 1798 and joined the frigate United States for a cruise in the West Indies. He took command of the schooner Experiment on 16 July 1800 and soon captured two armed French vessels and freed several captured American ships. After brief command of Chesapeake in 1801 and service in Constellation in 1802, Stewart sailed to the Mediterranean in command of the brig Siren. There he participated in the destruction of Philadelphia after her capture by Tripoli, helped to maintain the blockade of Tripoli, and distinguished himself in assaults on the enemy in August and September 1804. After the war, he participated in a show of force at Tunis and returned home as captain in 1806. On the outbreak of war in 1812, Stewart commanded, successively, Argus, Hornet, and Constellation. But, as the latter was closely blockaded in Norfolk, he took command of Constitution at Boston in 1813. He made two brilliant cruises in her between 1813 and 1815.

Stewart remained at Houston until 10 June, when she shifted to Galveston. She entered the drydock there on the 14th and exited on the 16th. The following day, she got underway for New Orleans, La., where she reported for duty to the Commandant of the 8th Naval District and to the Commander, Operational Training Command, Atlantic Fleet (COTCLANT). The destroyer escort departed New Orleans on 22 June to conduct shakedown training in the vicinity of Bermuda; completed it a month later; and sailed for Philadelphia. After six days at the Philadelphia Navy Yard, Stewart headed south to Miami, Fla., from whence she operated, conducting patrols and exercises, until 29 October. She put to sea; headed north; and, on the 31st, arrived at Norfolk, Va.

After a cruise up the Potomac River, during which she visited Quantico, Va., and the Washington Navy Yard, Stewart commenced a tour of duty training prospective destroyer-escort crews out of Norfolk. That assignment continued for the next three and one-half months, broken only by two temporary assignments escorting convoys from Tompkinsville, N.Y., to the Virginia Capes area. On 17 March 1944, she sailed from Norfolk for Tompkinsville; arrived there the next day; and put to sea, on the 19th, in the screen of a convoy bound, via Argentia, Newfoundland, for Reykjavik, Iceland. She returned to Tompkinsville on 10 April and sailed for Norfolk on the 12th. She arrived there on the 13th, drydocked from the 14th to the 16th, and joined the screen of convoy Task Unit (TU) 29.6.1 on 25 April.

Stewart sailed with her convoy via Aruba in the Netherlands West Indies and made Cristobal in the Canal Zone on 3 May. The following day, she put to sea with the convoy and escorted it as far as Guantanamo Bay, Cuba. There, she parted company with the other ships and steamed independently to Bermuda.

The destroyer escort arrived at Port Royal on 10 May and, for the next week, made experimental attacks on the captured Italian submarine Rea. From the 18th to the 23d, Stewart participated in a search off Bermuda for an unidentified radio direction finder contact. She made one depth charge attack on the 18th, but the results were inconclusive. On the 23d, she put back into Port Royal and remained there four days.

Stewart departed Port Royal again on the 27th, this time in a hunter-killer group composed of Rhind (DD-404) and Wainwright (DD-419), in addition to herself. On 3 June, the three warships rendezvoused with convoy UC 24, and the group sailed north. Stewart was detached on the 8th and, on the 9th, put into Boston, Mass. On the 25, she shifted to Casco Bay, Maine, and the following day, conducted antisubmarine warfare (ASW) exercises with the captured Italian submarine Vortice. On the 27th, she sailed south to Norfolk. Stewart arrived on the 29th and put to sea again on 1 July in the escort of convoy UGF 12. The destroyer escort screened the convoy to Naples, Italy, where it arrived on 15 July. She departed Naples on 21 July in the screen of the return convoy, GUF 12, and moored at the Brooklyn Navy Yard on 3 August.

In mid-August, she returned to Casco Bay for two days of training; then she entered drydock at Boston on the 17th. She was refloated on the 21st and soon got underway to join another convoy at Norfolk. Stewart arrived at Norfolk on 22 August. On the 24th, she began another voyage to Naples, returning to the United States at New York on 26 September. When she shifted to Casco Bay on 9 October, she took up ASW training again with Vortice. On 20 October, she returned to Boston, from whence she sailed two days later in the screen of convoy CU 44. On that same day, Stewart dropped four depth charges at a sound contact but had to abandon the search and rejoin the convoy. She entered the River Clyde and moored there on 2 November. Eight days later, the destroyer escort sailed for the Unite States and arrived in New York on 22 November.

Following another round of ASW training off Nantucket Island, this time with the Italian submarine Maneli, she departed Boston on 10 December in the screen of another convoy. Ten days later, she entered Plymouth Sound. On the night of 23 and 24 December, she shifted to the Isle of Wight where she joined another convoy getting underway for America. Between January and June 1945, Stewart, escorted three more convoys to England, one to Falmouth and two to Liverpool. Between each round-trip voyage, she trained off the New England coast. On the return voyage from the second of these missions, Stewart was called upon to assist SS Saint Mihiel in fighting fires caused by a collision with SS Nashbulk. Following her final voyage to England, Stewart put into the New York Navy Yard for 18 days of availability. On 24 June 1945, she departed New York for Norfolk, arriving there on the 26th. After a breif stop, she continued on to Guantanamo Bay, Cuba, where she conducted training exercises from 30 June until 12 July.

She cleared the area on the 12th in company with Edsall (DE-129) and Moore (DE-240). The three warships transited the Panama Canal on 16 July and made San Diego on the 24th. Four days at the Naval Repair Base followed; then Wilhoite (DE-397) joined Stewart and the other two destroyer escorts as they headed for Pearl Harbor on the 28th. The formation reached Pearl Harbor on 4 August, and Stewart conducted training, first with Spearfish (SS-190), then with Baltimore (CA-68) until 5 September when she departed for the west coast. She stopped at San Diego from 11 to 13 September; then continued on to the Canal Zone.

She retransmitted the canal on 22 September and made Philadelphia on the 27th. One month later, Stewart reported for duty to the Atlantic Reserve Fleet at Philadelphia. Stewart was placed out of commission, in reserve, in January 1947 and berthed in Florida. Stewart changed berthing areas three times between 1947 and 1969: first to Charleston in 1958, then to Norfolk in 1959, and finally to Orange, Tex., in 1969. In 1972, the destroyer escort underwent inspection and survey and was found to be unfit for further naval service. Consequently, her name was struck from the Navy list on 1 October 1972. On 25 June 1974, she was donated to the state of Texas; and she now stands landlocked next to Cavalla (SS-244) at Pelican Island in Galveston, Tex.