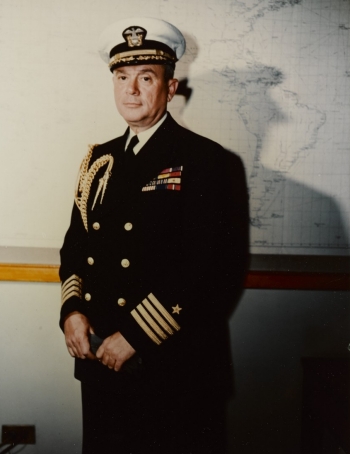 James Kimble Vardaman, Jr., son of the late James K. Vardaman, Governor of and United States Senator from Mississippi, and Mrs. Anne Burleson Vardaman, was born in Greenwood, Mississippi, on 28 August 1894. He attended the US Naval Preparatory School, Annapolis, Maryland in 1910-11, the University of Mississippi, 1911-12, and was graduated from Millsaps College, in Jackson, Mississippi, with the degree of Bachelor of Laws in 1914.

During World War I he had training at Fort Logan H. Roots Training Camp, near Little Rock, Arkansas, from May to August 1917, then until April 1919 served with the 335th Field Artillery as Second and First Lieutenant, then Captain, at Camp Pike at Little Rock; Camp Dix, Wrightstown, New Jersey; and with the American Expeditionary Force in France. Appointed Lieutenant Commander in the US Naval Reserve on 13 September 1939, he subsequently progressed in rank to that of Captain, to date from 21 April 1945. He served in the rank of Commodore from 9 August 1945 until his retirement on 1 October 1947, when he was advanced to the rank of Rear Admiral on the basis of combat citations.

For four months he served as Executive Officer of the Naval Operating Base, Oran, Algeria and, following duty as Executive Officer of the Advanced Amphibious Training Base, Algeria, served as Chief Staff Officer to the Commander, Advanced Base Group, Tunisia, in May and June 1943, and in Sicily from that time until September 1943. He assisted in planning and conducting the “leapfrog raids” for General George S. Patton’s Army on the north shore of Sicily, east of St. Stephano, which broke the deadlock between German and American forces and led to the early fall of Messina. For outstanding service in that area he was awarded the Legion of Merit and Silver Star Medal, with citations, in part, to follow:

Legion of Merit: “For exceptionally meritorious conduct…as Chief Staff Officer to Commander Advanced Naval Bases during the Invasion of the Island of Sicily. Exercising sound judgment and great resourcefulness, Lieutenant Commander Vardaman rendered valuable assistance in the planning and establishment of advanced bases, many of which were under enemy fire when occupied. His contribution to the successful completion of these bases and their use early in the campaign was an essential factor in the occupation of the Island by our forces.”

Silver Star Medal: “For conspicuous gallantry and intrepidity while serving on the Staff of the Commander Task Force EIGHTY-EIGHT during action against enemy forces in the Mediterranean Theater of Operations in August 1943.  With his task force operating in support of the SEVENTH Allied Army in its sustained advanced along the north coast of Sicily against Messina, Commodore (then Lt. Commander) Vardaman expertly trained and led the beach party and assisted in the planning of three amphibious landings carried out under cover of darkness behind enemy lines on August 6,11 and 15. Courageously volunteering to lead the first wave of landing craft to the beach in the initial assault, despite a physical handicap suffered in a previous battle, he succeeded in landing on the heavily mined shores and, consistently braving the intense fire laid down by the energy, directed and controlled the landing of subsequent waves…”

Having been injured by an enemy shell explosion in Sicily in July 1943, he was subsequently returned to the United States for hospitalization. In December of that year he became Executive Officer of the Amphibious Training Base, Camp Bradford, Naval Operating Base Norfolk, Virginia. From July to December 1944 he attended Columbia University, New York City, where he had special training in the Naval School of Military Government and Administration. In January 1945 he was ordered to the Pacific Area for duty as Executive Officer to the Commanding General, TENTH Army Military Government Headquarters. He later served with the 24th Corps on Leyte and Samar, Philippine Islands and participated in the invasion of Okinawa as Liaison Officer with an Engineer Brigade with which he served from D-Day until D plus 13.  He was then transferred to duty as Executive Officer to the Deputy Island Commander for Military Government.

Promoted to the rank of Captain, USNR, on 21 April 1945, while on Okinawa, he was ordered on 26 April to the White House, Washington, DC, for duty as Naval Aide to the President of the United States. He reported on 4 May, and was promoted to the rank of Commodore on 9 August 1945. On 21 January 1946, he was nominated by the President to be a Member of the Board of Governors of the Federal Reserve System for a term of fourteen years, to serve from 1 February 1946. Confirmed by the Senate to that position on 3 April, he was relieved of duty as Naval Aide to the President. Hospitalized soon after, he remained at the Naval Hospital, National Naval Medical Center, Bethesda, Maryland, until his retirement for physical disability, on 1 October 1947.

Admiral Vardaman was President, Vice President and Director of various state and national banks in Missouri and was interested in numerous business enterprises. Connected with the Federal Reserve System, he also served for four years as a Regional Director of the Reconstruction Finance Corporation, and as a director of many associations and societies. He died on 28 July 1972.