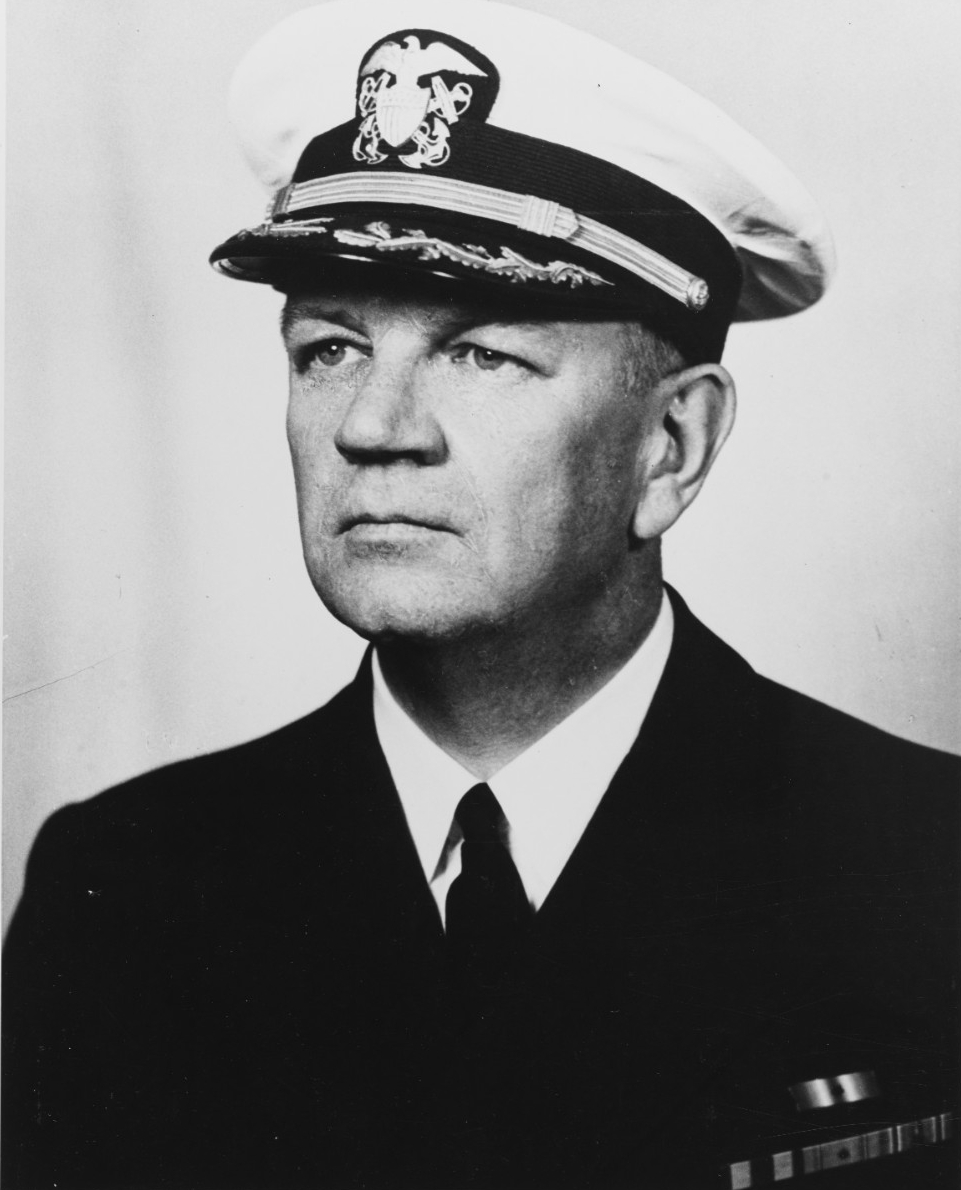 Admiral William M. Fechteler retired from active Navy duty in July 1956, after forty years of commissioned service. During that time he served in three wars, held the Navy's highest command post as Chief of Naval Operations, was a member of the Joint Chiefs of Staff, and was responsible for NATO defenses in Italy, Greece and Turkey.

During World War I the Admiral served aboard the USS Pennsylvania in the Atlantic Fleet. Between world wars he commanded the destroyer USS Perry, was a battleship gunnery officer, and held various destroyer staff billets. He was Chief of Staff to Rear Admiral M. F. Draemel, Commander, Destroyers, Battle Force, US Fleet, when this country entered World War II.

After serving as Director of Officer personnel in the Navy Department in 1942-43, Admiral Fechteler joined the Pacific Fleet as Commanding Officer of the USS Indiana. Later in the war, as an amphibious group commander, he participated in ten amphibious operations against Japanese-held New Guinea and the Philippines. He received the Distinguished Service Medal for his work in the planning and coordination of joint assault operations in the Southwest Pacific while serving as Commander, Amphibious Group EIGHT.

In 1945-46, Admiral Fechteler was Assistant Chief of Naval Personnel in Washington, DC, and after commanding Atlantic Fleet Battleship and Cruiser Forces he served for three years as Deputy Chief of Naval Operations for Personnel.

He became Commander in Chief, US Atlantic Fleet, in 1950, with additional duty as the United States Representative to NATO's Planning Group. He left that assignment during the Korean War to become Chief of Naval Operations, following the sudden death of Admiral Forrest Sherman, and a member of the Joint Chiefs of Staff. In that dual responsibility he was largely responsible for the expansion of naval forces to meet the needs of the Korean conflict and for the planning of naval operations in support of the United Nations' Forces in Korea. Fechteler worked especially hard to refine command relationships between US and NATO commanders and at the same time to build up alliance naval forces. He tirelessly advocated quality of life benefits for naval personnel, including pay increases, incentive allowances, and survivors benefits. He devoted considerable attention to the Navy' program to build the first large-deck aircraft carriers of the Forrestal class and promoted the design and construction of USS Nautilus , which would be the world's first nuclear-powered submarine. He was named Commander in Chief, Allied Forces, Southern Europe, in 1953, a post he held until his retirement in July l956.

After entering retired status, Admiral Fechteler continued on active duty as a member of a special committee studying security matters for the Secretary of Defense. On December 6, 1956, he was named a planning consultant in General Electric Company's Atomic Products Division, located in Washington, DC, and engaged in long-range planning in the atomic energy field.

Distinguished Service Medal: 'For exceptionally meritorious service to the Government of the United States in a duty of great responsibility as Attack Group Commander, participating in landing operations at enemy Japanese-controlled Los Negros on February 29, Humboldt Bay, April 22; and as Attack Force Commander during the Invasion of Biak, May 27; Noemfoor Islands, July 2; and Cape Sansapor, July 30, 1944...Rear Admiral Fechteler conducted his command in close cooperation with Army and Air Force Commanders and by his marked initiative and superb tactical ability was directly instrumental in solving operational problems attendant upon precisely timed action involving forces participating simultaneously over wide areas. His foresight and resourcefulness in the formulation of plans designed for the high degree of flexibility essential for complete coordination of the units taking part were largely responsible for the success of these vital and hazardous invasions...'

Gold Star in lieu of a second Distinguished Service Medal: 'For exceptionally meritorious service...as the Chief of Naval Operations and member of the Joint Chiefs of Staff from 16 August 1951 to 15 August l953...Admiral Fechteler's cooperation was of the highest order as a member of the Joint Chiefs of Staff in making plans for the defense of the United States. He exercised the highest quality of Command as the Chief of Naval Operations in directing the unified commands for which he was the Naval Executive agent. He was responsible for instituting an orderly program of new construction and replacement of obsolete Naval vessels in order to maintain the high combat readiness demanded of the operating Naval Forces. His leadership and forceful command of the United States Navy which was engaged in the Korean action during his tenure of office was exceptional...'

Distinguished Service Medal (by the War Department): 'For service as Attack Group Commander in the Southwest Pacific Area from 31 July 1944 to 15 March l945.'

Legion of Merit: 'For exceptionally meritorious conduct in the performance of outstanding services to the Government of the United States as Assistant Chief of Naval personnel from March 26 to November 1, 1945...'

Bronze Star Medal with Combat 'V': For meritorious achievement as Commanding Officer of the USS Indiana during operations against enemy Japanese forces in the South and Central Pacific War Area from August 10, 1943, to January 13, 1944...'