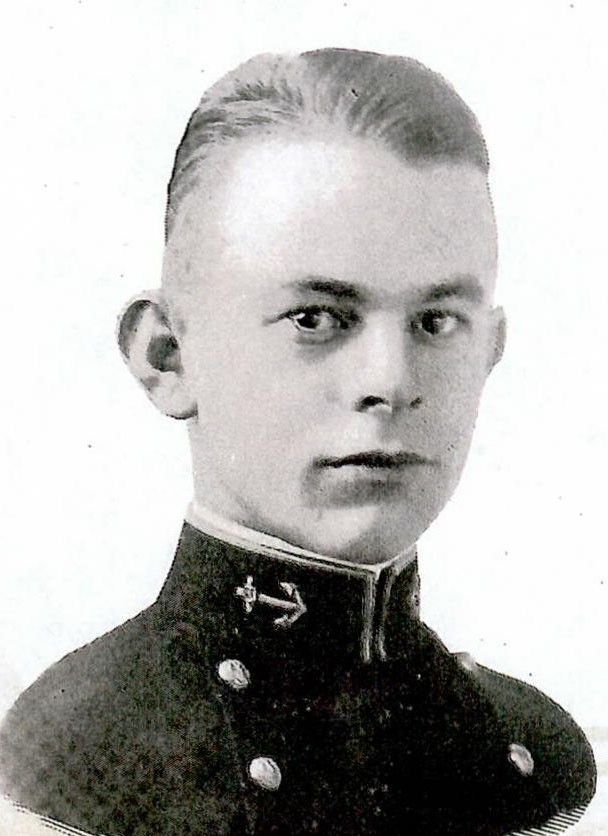 Grayson Birch Carter, son of Cassius and Ruth Birch Carter, was born in San Diego, California, on November 16, 1897. He attended public schools in San Diego before his appointment to the US Naval Academy, Annapolis, Maryland, by Senator Works of California on June 7, 1915. Graduated with the Class of 1919 on June 7, 1918, he subsequently attained the rank of Captain, to date from June 18, 1942. He was transferred to the Retired List of the Navy on June 30, 1949 and advanced to the rank of Rear Admiral on the basis of combat citations.

Following graduation from the Naval Academy in June 1918, during the later period of World War I, he joined USS Michigan, and served in that battleship, while she operated with US Naval Forces in European waters. He reported for duty with the Destroyer Force at Queenstown, Ireland, in September 1918 and for two months served with the Torpedo Repair Station there. A few days after Armistice he was detached for duty aboard USS Terry.

On March 5, 1919 he reported to the Bethlehem Shipbuilding Corporation, San Francisco, California, for duty in connection with fitting out USS Chauncey. He was detached before that vessel was commissioned, and had pre-commissioning duty aboard USS Anthony at the Union Iron Works at San Francisco. He served aboard the Anthony from her commissioning, June 19, 1919, until May 8, 1920, after which he continued sea duty until June 1922, serving consecutively in the destroyers Schley and Philip, the transport Zeilin and the battleships New York and California.

Upon arrival in San Francisco on June 5, 1922, he reported to USS Vega for brief duty, and on August 14, joined USS Bittern at Cavite, Philippine Islands. He remained on Asiatic Station for the next three years, during which period he transferred to USS Rizal in April 1924. After his return to the United States via USS Chaumont, he had brief duty in the Receiving Ship, New York, before reporting as Officer in Charge of the Navy Recruiting Station, New Orleans, Louisiana, from July 1924 until November 1927.

Successive duty as Executive Officer of USS Henshaw and USS Wasmuth preceded instruction at the Naval War College, Newport, Rhode Island, and duty from June 1931 until May 1932 at the Naval Training Station there. On June 4 he joined USS Melville, and served for two years as her Navigator, while she operated as tender for Destroyers, Battle Force. On June 10, 1934 he assumed command of USS Childs.

Relieved of command of the Childs on March 12, 1935, he reported the next month to the Bureau of Navigation, Navy Department, Washington, DC, where he served until May 1937, with additional duty for one year as Aide at the White House. From June 1, 1937 until June 14, 1939, he had sea duty as Gunnery Officer of the battleship Tennessee, and during that period established the World’s Record in Short Range Battle Practice (1938). He was commended for his part in the winning of the Navy “E” for Secondary Battery, USS Tennessee, for the Gunnery year 1937-38.

On December 14, 1942 he was relieved of command of USS Salt Lake City, and ordered to command LST Flotilla 5. For “extraordinary heroism” as Commanding Officer of a “Task Group of LST’s and escorting destroyers in action… at Vella Lavella during August 1943…” he was awarded the Navy Cross. He was also awarded a Gold Star lieu of the Second Legion of Merit with combat “V” for “exceptionally meritorious” service in command of LST Flotilla Five during operations against enemy Japanese forces from June 1943 to May 1944…”

His Legion of Merit also carrying a Combat “V”, was awarded for “exceptionally meritorious conduct… as Commander of a Tractor Group during operations…in the South and Central Pacific War Areas in June and July 1944…” The citation continues in part: “(He) made possible the scheduled landing of a Marine Division on one of the beaches of an enemy-held island, thereby contributing materially to the expedition’s seizure of the beaches with a minimum loss of personnel…”

From December 199 until June 1945, shortly before the Japanese capitulation, he command the Ship Training Group, Amphibious Forces, Pacific Fleet, at Coronado, California. After detachment he again went to the Pacific to command USS New York, in which he had served as a Lieutenant (jg) in 1921. Under his command that battleship returned troops from Hawaii to the West Coast and participated at San Diego, California, in the first Navy Day exercises following the war.

Rear Admiral Carter was ordered in February 1947 to duty as Director of Naval Reserve, for the Third Naval District, with headquarters in New York, New York. He served there until relieved of all active duty pending his retirement on June 30, 1949.