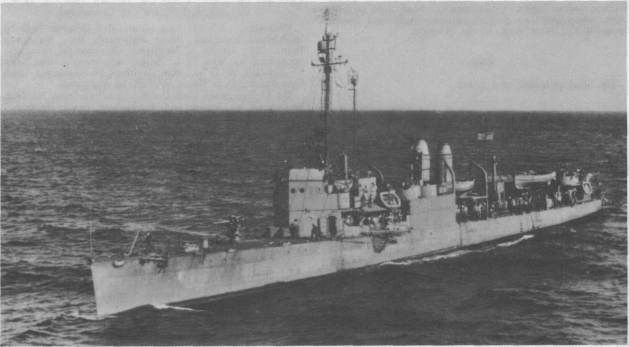 Earle W. F. Childs, born on 1 August 1893, in Philadelphia, Pa., was a member of the Naval Academy class of 1915. As a lieutenant, he served in World War I in submarine L-2. On board British submarine H-5 as an observer, Lt. Childs was lost when British merchantman Rutherglen mistakenly identified H-5 as a German U-boat and rammed the apparent enemy submarine off the Welsh coast, and she sank with all hands, on 2 March 1918.

Arriving at Gibraltar on 14 February 1921, Childs joined U.S. Naval Forces, Europe, to cruise in the Mediterranean, Adriatic, North, and Baltic Seas until 25 November, when she arrived at Constantinople, Turkey. Here she joined the relief mission sent to Russia early in 1922, remaining in the Black Sea on diplomatic duties until 1 April. On 8 July, she departed from Cherbourg, France, for Philadelphia, returning to the United States on 29 July.

Childs conducted training operations, and joined other ships in fleet exercises along the Atlantic coast and in the Caribbean until 14 February 1925, when, with the Scouting Fleet, she stood out of Guantánamo Bay, Cuba, for massive fleet exercises in Fleet Problem V in the Hawaiian Islands and then returned to the east coast. In 1932, 1933, and 1934, the annual concentration of the Fleet for battle practice was again held on the West Coast, and Childs took part. With her home port changed to San Diego, Calif., on 9 November, Childs served as flagship of Destroyer Division 8 Rotating Reserve, Scouting Force (5 January–15 June) when she was in full commission again. She spent the summer of 1935 cruising off the Pacific Northwest and Alaska.

The next year Childs returned to the east coast for overhaul, then returned to duty at San Diego, cruising several times to the Hawaiian Islands before 14 May 1938, when she cleared for Philadelphia and conversion to a seaplane tender. Reclassified AVP-14, she saw her first service in her new role during Fleet Problem XX early in 1939, as the participants ranged across the Caribbean and the northeast coast of South America. After final preparations at Philadelphia, she sailed for her new hiome port of Pearl Harbor, T.H., arriving on 29 June. She tended seaplanes there and on the plane guard stations off Midway, Wake, and Guam until 1 October 1940, when she was reclassified to a destroyer seaplane tender (AVD-1) and ordered to reinforce the Asiatic Fleet. The next day she left Hawaiian waters astern for Cavite in the Philippines, arriving on 1 November to begin her service to air patrol squadrons.

When war with Japan broke out, Childs lay in Cavite Navy Yard for repair, and during the devastation of the yard by Japanese aircraft on 10 December 1941, escaped damage by skillful evasive maneuvering in the confined harbor area. She continued to tend Consolidated PBY-4 Catalinas of Patrol Wing 10 from Manila for four more days, then began a lengthy base-to-base withdrawal until she reached Exmouth Gulf, Australia, on 28 February 1942. From Fremantle and other west Australian ports, Childs continued her tender duties until 12 August 1944. During this time, her planes scouted and bombed enemy positions and shipping, mined the waters off Balikpapan, Borneo, and performed air-sea rescue missions.

Childs returned to the west coast on 19 September 1944, and after overhaul, conducted training operations off the west coast until the close of the war. She was decommissioned on 10 December 1945, on 3 January 1946, stricken from the Naval Vessel Register, and on 23 May of that year sold for scrap.