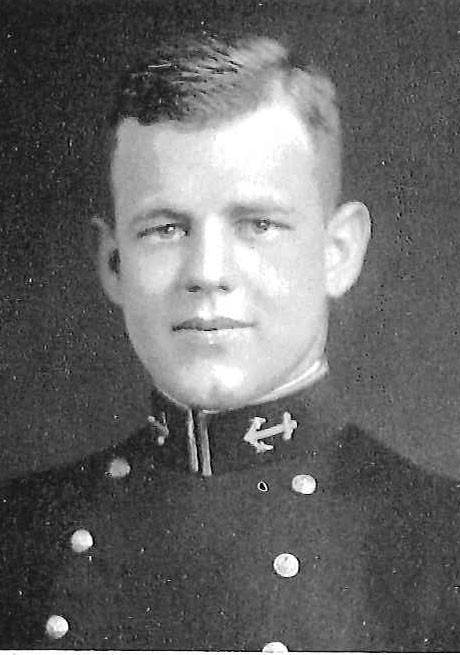 Albert Lilly Becker was born in Brookhaven, Mississippi, on December 3, 1911, son of William H. Becker, Sr., and Mrs. Verna Lilly Becker. He was graduated from Brookhaven High School and attended Mississippi State College for two years before his appointment to the U.S. Naval Academy, Annapolis, Maryland, which he entered in June 1930. Graduated with the degree of Bachelor of Science and commissioned Ensign in the US Navy on May 31, 1934, he subsequently advanced to the rank of Captain, to date from January 1, 1953.

After graduation from the Naval Academy n 1934, he served until April 1936 as a junior Watch and Division Officer in USS Omaha, and had similar duty on board USS Hatfield for two months thereafter. He was a student at the Submarine School, New London, Connecticut, from June to December 1936, and on graduation was assigned to USS Argonaut to serve as Gunnery Mine Officer until February 1941. In March, he reported to the Deep Sea Diving School at the Navy Yard, Washington, DC, and from August 1941 until August 1942 was again at New London, this time assigned as an Instructor, Submarine Escape Training Task.

Early in World War II, he joined USS Blackfish, and as Executive Officer of that submarine completed five war patrols in the European-African Area from August 1942 to August 1943. After brief duty at the Submarine Base, New London, where he completed the Prospective Commanding Officers course, he assumed command of USS Cobia in March 1944 and, in the Pacific Combat Area this time, completed five war patrols before his detachment in July 1945. For outstanding service during his period of command, he was awarded the Navy Cross, Silver Star Medal, and a Letter of Commendation with Ribbon and Combat “V.” Citations follow, in part:

Navy Cross: “For extraordinary heroism as Commanding Officer of the USS Cobia, during the First War Patrol of that vessel in enemy Japanese-controlled waters, from June 26 to August 14, 1944. Penetrating strong enemy escort screens and pressing home bold torpedo attacks, (he) succeeded in sinking four hostile vessels totaling 22,800 tons. Fighting his ship with daring and tenacity during two surface gun engagements with an independent enemy ship and a group of three armed patrol vessels, he directed attacks resulting in the sinking of al four of these enemy units for a total of 1,450 tons, and successfully evaded an attempted ramming by one of the armed patrol vessels, Although severely depth-charged during the course of the attack, he brought the Cobia to port with but minor damage…”

Silver Star Medal: “For conspicuous gallantry and intrepidity in action as Commanding Officer of the USS Cobia, during the Fifth War Patrol of that vessel in the Southwest Pacific War Area from May 9 to June 18, 1945. When intended target detected the Cobia and launched a severe depth-charged attack which damaged all the torpedo tubes and ignited a fire in the maneuvering room, Commander Becker directed rapid repair work, thereby enabling his vessel to assist another submarine in the destruction of an enemy freighter. Later, he sighted and sank two enemy tankers in a well executed attack…”

Letter of Commendation: “For distinguishing himself by excellent service as Commanding Officer of the USS Cobia during her Third War Patrol in enemy controlled waters from November 30, 1944 to January 24, 1945. On January 14, Commander Becker displayed outstanding ability in successfully attacking an enemy coastal mine-layer. From an excellent submerged position, in broad daylight, five torpedoes were fired at this vessel: The first hit completely destroyed her. When the Cobia surfaced to take a picture of the sinking ship, an enemy plane forced her down again and one close aerial bomb was received. The Cobia also performed important reconnaissance duty from December 12, 1944 to January 8, 1945. Two Japanese prisoners were picked up from a raft and brought back to port…”

When detached from the Cobia in July 1945, he was ordered to the Submarine Training Command, Pacific, where he served as Training Officer for five months. He was Operations Officer on the Staff of Commander Submarines, Pacific from January 1946 until October 1947, and for two years thereafter was Assistant for Naval Personnel on the Staff of Commander Service Force, Pacific. In January 1950 he reported to the Navy Department, Washington, DC, for a tour of duty in the Officer Records Division of the Bureau of Naval Personnel, after which from April 1952 until August 1953 he commanded Submarine Division 41.

In September 1953 he assumed command of the USS Cacapon (AO-52) and, detached in July 1954, was a student at the Naval War College, Newport, Rhode Island, from August of that year until June 1955. He served as Commanded Submarine Squadron TWELVE for a year, and in August 1956 joined the Staff of Commander New London Group, Atlantic Reserve Fleet, as Chief Staff Officer. Three years later he was detached to report in September 1959 as Commander Mine Flotilla ONE, of Mine Squadron THREE. On August 22, 1960 he was ordered detached and to Headquarters, Third Naval District, New York, for duty.