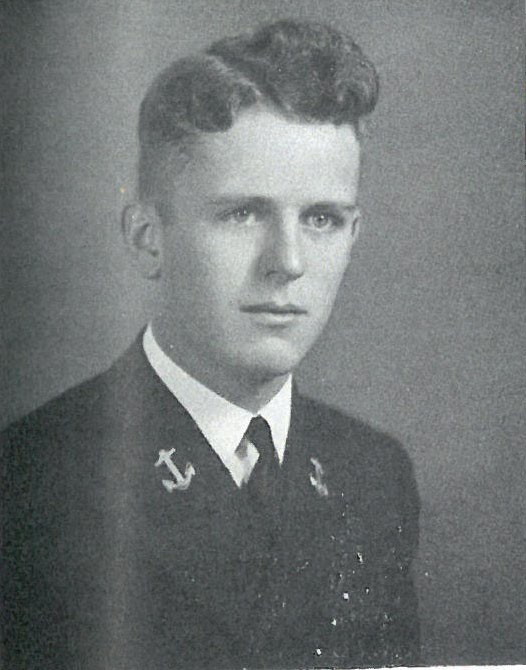 Theodore Lawrence Balis was born in Chicago, Illinois, on June 6, 1920, son of Casimer and Anna (Hidzick) Balis. He attended Lane Technical School, Wright Junior College and DePaul University, all in Chicago, prior to entering the US Naval Academy, Annapolis, Maryland, on appointment from his native state in 1938. Graduated with the Class of 1942 on December 19, 1941 (accelerated course due to the National Emergency) and commissioned Ensign, he subsequently advanced in rank to that of Captain, to date from July 1, 1961.

Following graduation from the Naval Academy in 1941, he was assigned for several months to Headquarters, Fourteenth Naval District, Pearl Harbor, Territory of Hawaii, and in May 1942 joined USS Boise (CL-47). While on board that cruiser, he saw action during the Sicilian occupation, the Salerno landing and operations in the Philippine Islands, Cape Esperance, Eastern New Guinea and Western New Guinea. Detached from the Boise in September 1944, he had training at the Naval Air Station, Ottumwa, Iowa, and from March 1945 to January 1946 had further training at the Naval Air Training Base, Corpus Christi, Texas. He was assigned to the Naval Air Station, Jacksonville, Florida, and in July 1946 reported on board USS Springfield (CL-66).

In December 1946 he joined the Staff of Commander Cruiser Division THIRTEEN and in September 1947 reported as Executive Officer of USS Samuel N. Moore (DD-747). Three months later he transferred, in a similar capacity, to USS Norris (DD-859) and in July 1949 was detached for duty on the Research and Development Board, Department of Defense, Washington, DC. He served as Staff Duty Officer on the Staff of Commander Naval Forces, Far East, from August 1950 to March 1951, and “for meritorious service…” in that capacity, he received a Letter of Commendation, with authorization to wear the Commendation Ribbon, from Commander Naval Forces, Far East. The citation continues in part:

“Lieutenant Commander Balis contributed immeasurably to the accomplishment of the mission of Commander Naval Forces, Far East, in meeting the contingencies resulting from Korean hostilities…His performance in this task and other assigned tasks indicated a high order of ability, perseverance and devotion to duty…”

He next commanded USS Diachenko (APD-123) and in July 1952 reported for instruction at the Naval War College, Newport, Rhode Island. After completing the course there in June 1953, he was assigned to the Strategic Plans Division, Office of the Chief of Naval Operations, Navy Department, Washington, DC. He remained there until October 1955, then commanded USS Orleck (DD-886). In August 1957 he joined the Staff of Commander Cruiser Destroyer Force, US Pacific Fleet and in July 1959 reported as Executive Officer of USS St. Paul (CA-73). He became Commanded Destroyer Division THIRTY-TWO in February 1961 and in January 1962 returned to duty in the Strategic Plans Division, Officer of the Chief of Naval Operations. He remained there until July 1964 and following instruction at the Industrial College of the Armed Forces, Washington, DC, assumed command in June 1965 of USS Newport News (CA-148). In August 1966 he was ordered to duty on the Joint Staff, Commander in Chief, Atlantic.