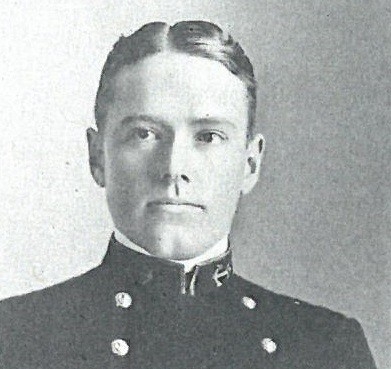 Samuel Jacob Zeigler, Jr., was born on 29 July 1889, in Bordeaux, South Carolina, son of Samuel J. and Howell McIntosh Zeigler. He attended Louisiana State University at Baton Rouge, before entering the US Naval Academy, Annapolis, Maryland, from the State of Louisiana, in 1908. Graduated with distinction, fourth in a class of one hundred and fifty-six, and commissioned Ensign on 7 June 1912, he was appointed Assistant Naval Constructor on 27 July 1915.  On 14 October 1936, he was transferred from the Construction Corps to the Line of the Navy and was designated for aeronautical engineering duty only.  Advancing periodically in rank, he attained that of Captain, to date from 1 November 1939. He was transferred to the Retired List of the US Navy on 1 January 1947.

After graduation from the Naval Academy in 1912, he joined USS Minnesota and in January 1914 was ordered to the Postgraduate School, Annapolis, Maryland, for instruction in Naval architecture. Continuing the course at the Massachusetts Institute of Technology, Cambridge, he received the degree of Master of Science in 1916. (He also completed a two year course in business administration at Harvard University, Graduate School of Business Administration). In September 1916 he reported for duty in the Hull Division at the Navy Yard, Boston, Massachusetts, where he remained until October 1918.

Following service, which extended to February 1919, at Base SEVEN, Brest, France, (Ship Repairs), he returned to the United States and was assigned to the Industrial Department, Navy Yard, Norfolk, Virginia.  Between November 1921 and September 1925, he served at the Naval Aircraft Factory, Philadelphia, Pennsylvania, after which he reported for duty in the Bureau of Aeronautics, Navy Department, Washington, DC. He remained there until June 1930, when he was again assigned to the Naval Aircraft Factory, Philadelphia.  In May 1934 he became Manager of that facility, and continued duty in that capacity until July 1936.

He served at the Naval Air Station, Pensacola, Florida until January 1937, when he again reported for duty in the Bureau of Aeronautics, Navy Department. In July 1938 he joined the staff of Commander Aircraft, Battle Force and Commander Carrier Division ONE, US Fleet, as Engineer Officer for Aircraft. He continued duty in that capacity until June 1940, when he became General Inspector of Naval Aircraft, Western District, San Diego, California.

In April 1943 he became Manager of the Naval Aircraft Factory, Philadelphia, and in August of the same year was designated Commanding Officer of the Naval Air Material Center, Philadelphia.  In September 1944 he reported as Bureau of Aeronautics Representative at Philadelphia and for “exceptionally meritorious achievement…(in the latter capacity) from 28 September 1944, to 19 November 1945…” he received a Letter of Commendation, with authorization to wear the Commendation Ribbon, from the Secretary of Navy, which follows in part:

“Charged with the responsibility for inspection of articles contracted for in your district, you performed duties of great responsibility with outstanding confidence, technical skill and aggressive leadership.  It was a great extent through your direction that the inspection of aircraft power plants in the country that these products gave extraordinary and reliable performance during the war…”

He continued duty in Philadelphia until his transfer to the Retired List of the US Navy on 1 January 1947.

In 1915 he married Miss France Tomlin Marburg of Philadelphia, Pennsylvania and they had two sons. Captain Zeigler died on 24 October 1975.