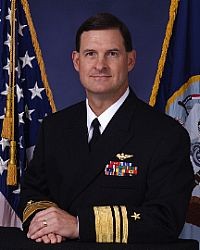 Fleet tours include VF-41 as an F-14 Tomcat radar intercept officer embarked in USS Nimitz. He wears the distinguished Flying Cross for action in VF-41. After redesignation as a naval aviator he flew with VF-143 as an F-14 pilot embarked in USS Dwight D. Eisenhower and with VF-101 at NAS Oceana as a Tomcat instructor pilot and A-4 adversary pilot.

Venlet is from Pottstown, Pennsylvania, and graduated from the US Naval Academy. He is a graduate of the Naval Postgraduate School and US Naval Test Pilot School and is a member of the Society of Experimental Test Pilots. He has a BS in Systems Engineering and MS in Aerospace Engineering.