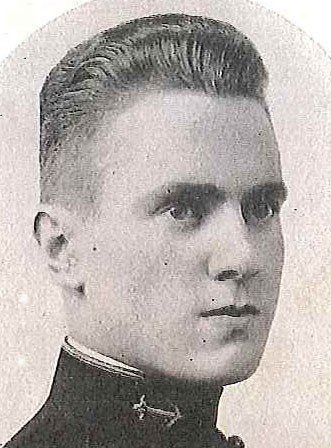 William Francis Fitzgerald, Jr., was born in Brooklyn, New York, on November 29, 1900, son of William F. and Emily Alice (Brown) Fitzgerald. He attended Scott and Waite High Schools in Toledo, Ohio, and entered the US Naval Academy, Annapolis, Maryland, on appointment from the Ninth Ohio District in 1917. While a Midshipman there he had service during a period of World War I on board the USS Maine of the Atlantic Fleet. Graduated with the Class of 1921 on June 5, 1920 (course accelerated due to National Emergency), he was commissioned Ensign in the US Navy from that date, and subsequently progressed to the rank of Captain, to date from June 20, 1942. Upon retirement on July 1, 1950, he was advanced to the rank of Rear Admiral on the basis of a citation for combat.

After graduation from the Naval Academy he was assigned to USS Delaware, in which he served from July 9, 1920, until May 26, 1921. He served for a year on board USS Maddox, and on June 2, 1922, was transferred to USS McCormick, which during the Greek-Turkish War operated in the Mediterranean and Black Sea and evacuated refugees from Smyrna. Detached in January 1924, he served briefly on board  USS Scorpion and USS Parrott, returned to the McCormick for four month’s duty then served in USS New York from November 1924 until November 1926. On January 3, 1927, he joined USS Milwaukee, and while serving on board was a member of the landing Force in Nicaragua from February to May of that year.

On August 1, 1927, he returned to Annapolis, for instruction in General Line at the Naval Postgraduate School, and from June 1928 until May 28, 1929, was a student at the Naval War College, Newport, Rhode Island.  On July 2, 1929, he became Aide and Flag Lieutenant on the Staff of Commander Yangtze Patrol, and had Yangtze service also as First Lieutenant of USS Tulsa and as Executive Officer of USS Simpson in 1930. He remained on board the Simpson until November 1931, and in February 1932 returned to the Naval Academy for duty until May 1934 as an Instructor in the Department of Seamanship and Flight Tactics.

For nearly two years he served as Aide and Flag Secretary on the Staff of Commander Battleship Division One, Battle Force, after which he had similar duty on the Staff of Commander Battleship, Battle Force, from March 30, 1945, until April 13, 1937. He then returned to the Naval Academy for a tour of duty as an Instructor in the Department of Seamanship and Navigation, and while on duty there accompanied the Midshipman aboard USS Wyoming during the summer cruise of 1938. In June 1939 he assumed command of USS Cassin, and for his work in connection with salvage and rescue of a civilian craft during a storm off the coast of California in September of that year, received several letters of commendation.

In January 1941 he was detached from command of the Cassin for duty as Aide and Flag Secretary on the Staff of Commander Battleships, Battle Force, and later served as Operations Officer on the Staff of Commander Battleships, Battle Fleet, at Pearl Harbor, attached to USS West Virginia. He was awarded a Letter of Commendation, with Combat “V,” by the Secretary of Navy, for service during the Japanese attack on the Fleet on December 7, 1941.

In September 1942 he was transferred to the Staff of Commander Destroyers, Pacific Fleet, and served for a year as Chief of Staff and Aide. Upon his return to the United States in August 1943, he reported to Headquarters of the Commander in Chief, US Fleet, Navy Department, Washington, DC, where he was on duty until March 1945. During this period he was a member of the Joint War Plans Committee of the Joint Chiefs of Staff and this capacity attended the Cairo Conference as a member of the United States delegation headed by President Roosevelt. On March 24, he assumed command of USS Brooklyn (CL-40), and was Commanding Officer of that cruiser, assigned to training duty on the East Coast. She was moored in Newport Harbor, awaiting a Pacific Fleet assignment when hostilities ceased in August 1945.

Rear Admiral (then Captain) Fitzgerald was named Commander Philadelphia Group, Reserve Fleet, US Atlantic Fleet, his pennant in the USS Brooklyn, and his title later became Commander Philadelphia Group, Inactive Fleet, Atlantic. He remained in that assignment until February 1946, then served for a year as Chief of Staff and Aide to Commander Tenth Fleet, at Headquarters, Washington, DC, the function of which was a control United States anti-submarine operations in the Atlantic. Upon change of designation of the Tenth Fleet he became Chief of Staff, Commander Naval Forces, Mediterranean, and served as such in 1946 and 1947. He was then transferred to the Navy Department, for duty as a Member of the Navy Regulations Board, later serving in the Officer of the Chief of Naval Operations.

Under orders of June 7, 1948, he became Port Director and Commanding Officer of the Port Director Office at Pearl Harbor, Territory of Hawaii, and on March 2, 1949, was designated Chief of Staff and Aide to the Commander, Hawaiian Sea Frontier. He remained in that assignment until relieved of active duty pending his retirement on July 1, 1950.